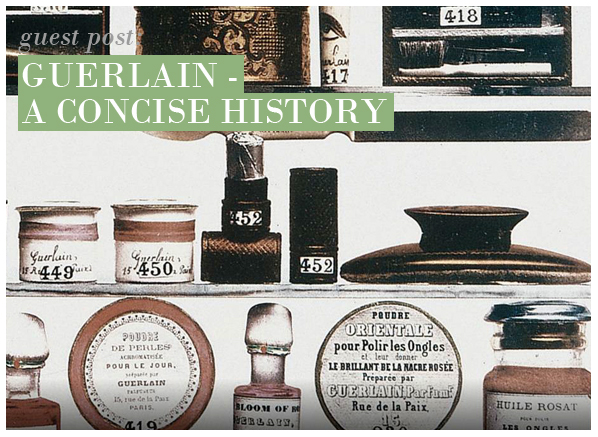 Guerlain was founded in 1828 by Pierre Francois Pascal Guerlain.  His philosophy was to make good products and to never compromise on quality. This is still the philosophy of Guerlain today, more than 170 years on. In 1840 he created Eau Imperial, which is still in production!

The family tradition was carried on with Aime Guerlain who originally trained as chemist but began making perfumes in 1870. One of his most famous creations still popular today is Jicky. This was the first “abstract” perfume ever made i.e. one that doesn’t smell of a singular note. This fragrance is said to have been named after an English student that Aime fell in love with. In reality, it was made for his nephew, Jacques Guerlain. This fragrance is said to be one of Sean Connery’s favourites.

The next perfumer of the Guerlain family was Jacques Guerlain. He is known in the perfumery world as one of the best noses of the 21st century, producing the beautiful classics – Mouchoir de Monsieur, L’Heure Bleu, Mitsouko, Shalimar and Vol Du Nuit. These are all still in high demand to this day.

Next to venture in the family business was Jean-Paul Guerlain. Highly respected in the perfume industry as a very talented nose. He is responsible for some outstanding creations such as – Vetiver, Samara, Parure, Chamade, Nahema and some of the Aqua Allegorias.

In June 2008 Thierry Wasser joined Guerlain to be the first in house “nose” that was not a family member. His first creation was Guerlain Homme. Although Thierry was indeed the in house perfumer, Jean Paul Guerlain was still having an influence on this perfume. It is said that when Thierry was having difficulty in find a note to give freshness to the fragrance which would last from “top to bottom” Jean Paul lent his expertise and suggested green rhubarb. This indeed was what Thierry was looking for and is in the final composition which is available today.

Unfortunately, Guerlain is no longer a family run business. In 1994 Guerlain was sold to LVMH who are now in charge of fragrance creation and production. Fortunately, Jean Paul was still kept on in a “creative director” type of role, to oversee the transition and, I assume, to ensure the fragrances would live up to the expectations of the Guerlain name.

This entry was posted on Wednesday, July 14th, 2010 at 8:28 am and is filed under Brand Focus, Fragrance, Guest bloggers. You can follow any responses to this entry through the RSS 2.0 feed. You can skip to the end and leave a response. Pinging is currently not allowed.

@escentual Up to 1/3 off French Pharmacy ends at midnight!⏱ Who else loved Kylie Jenner's JPG fragrance inspired dress for the… https://t.co/I7cumBDT1C
6 hours, 15 minutes ago • reply • retweet • favourite

@escentual Did you know that we're a Cardiff based premium beauty retailer? 🏴󠁧󠁢󠁷󠁬󠁳󠁿
14 hours, 29 minutes ago • reply • retweet • favourite