A Review of Solo Loewe Pop 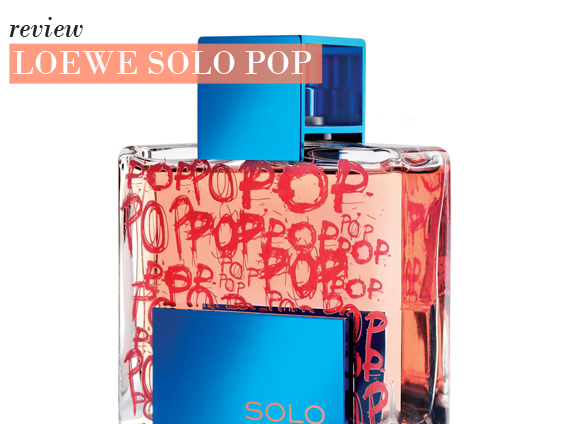 This is the third in the line of Solo Loewe fragrances from the Spanish fashion house. This time the bottle is covered in the word Pop in graffiti style orange font. The juice is also orange and contrasts with the electric blue of the metal. It is inspired by the Pop Art scene and is said to be a balance between strength, freedom and determination.

The fragrance itself carries on the theme of mixing wet and dry accords. Solo Loewe Pop is the brighter, almost fizzy fragrance of the trio. This is an energetic, fresh fragrance which kicks off with a burst of citrusy fresh mandarin quickly followed by the fizz of pink pepper.  This leads on to a heart of lavender and a base of vanilla and tonka. This is from the note structure provided by Loewe, but my nose detects many other contrasting elements. There is a dry woody feel with the fizz of the pink pepper sat neatly on top. Don’t let the base of vanilla and tonka fool you, this if far from a heavy oriental fragrance. The vanilla and tonka seem to hide away, almost to ground the scent, to give it depth and character and to make it something much more than a simple citrus.

It’s difficult to categorise this fragrance, which I believe to be Loewe’s intention. It plays with contrasts of wet and bright accords yet at the same time has quite a dry feel to it. As the fragrance dries down, it never loses its fizz but develops a fruiter more playful feel. Fresh, sexy and masculine – but none of these elements dominate, they play with each other constantly changing and contrasting as the fragrance develops.

Comparing all three of the line, the first, Solo Loewe, is a deeper, spicier/woody fragrance. In contrast and next in the line, Solo Loewe Intense doesn’t focus on the spicy elements of the fragrance, it adds a more aquatic fresh feel.  Solo Loewe Pop fits in to this trio by adding a fizz and zing to the fragrance. The same contrasting elements are there, but this time they are pepped up, sharpened and given a fruity edge.

I highly recommend this beautifully constructed fragrance, if you like any of the Solo Loewe line, this is sure to be a winner!

Check out the range here: Solo Loewe Pop at Escentual.com

This entry was posted on Tuesday, September 14th, 2010 at 8:28 am and is filed under Fragrance, Guest bloggers, Men, New products, Tried & Tested. You can follow any responses to this entry through the RSS 2.0 feed. You can skip to the end and leave a response. Pinging is currently not allowed.