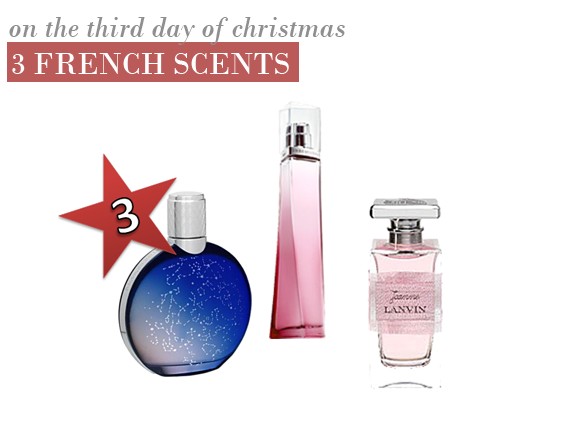 Because who wants French Hens for Christmas? These three scents epitomise quintessential French chic, from the oldest French couture house to a modern interpretation of the city of Paris. Sophisticated, classic and timeless, these scents are all about couture…

Van Cleef & Arpels Midnight in Paris Eau de Toilette
from £35.00
A haute couture scent for men that is as mysterious and fascinating as the sky over Paris. The unique bottle is a poetic interpretation of Place Vendome at night, a midnight blue flacon with a tangle of constellations.

Givenchy Very Irresistible Eau de Toilette
from £33.50
The epitome of Parisian chic, created as a tribute to the chance meeting between Hubert de Givenchy and Audrey Hepburn that would change both of their lives. A unique mix of elegance and spontaneity that is very irresistible.

Jeanne Lanvin Eau de Parfum
from £29.12
A tribute to the unforgettable founder of the first French Couture House, Jeanne Lanvin. A harmonious fusion of history and modernity, all wrapped up in couture tulle and blushing with romantic pink.

This entry was posted on Wednesday, December 22nd, 2010 at 9:08 am and is filed under Christmas, Fragrance. You can follow any responses to this entry through the RSS 2.0 feed. You can skip to the end and leave a response. Pinging is currently not allowed.

@escentual Psst... We've found out the secret to glowy, and we have to share it with you 👀 Find out our three simple ways to… https://t.co/4LhF7KH9GY
1 day, 5 hours ago • reply • retweet • favourite

@escentual Try the E-S-C-E-N-T-U-A-L SPF application method so you're always safe in the sun. Here are our #SunPoverty ambassa… https://t.co/lx3zk5o6Ym
3 days, 34 minutes ago • reply • retweet • favourite

@escentual News just in! There's still time to enter our Instagram competition to be in with a chance of winning the Initio He… https://t.co/nbuTzL5pH0
4 days, 35 minutes ago • reply • retweet • favourite

@escentual Thank you, Issey Miyake, for making the fragrance and fashion world a more beautiful place❤️ Your legacy will live on forever #isseymiyake
5 days, 3 hours ago • reply • retweet • favourite