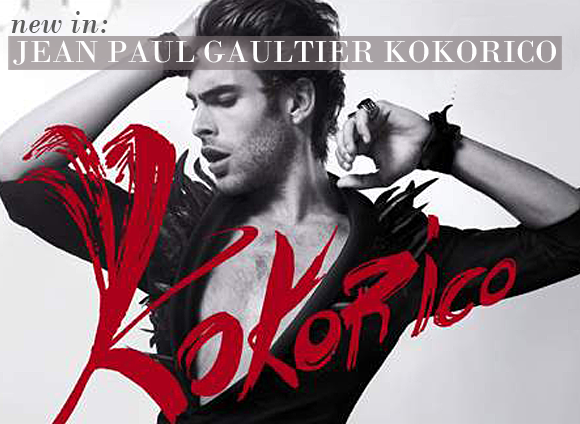 The wait is finally over, Jean Paul Gaultier fans – the brand new fragrance for men has launched today, and it is every bit as unreserved as you’d expect.

Kokorico is described as a “a powerful, dynamic, aphrodisiac fragrance”, a scent for the confident and the charming with a blend of naturally extracted cocoa and wood notes. Far from being gourmand and overly heady, the richness is counterbalanced nicely with some green notes and a dose of fresh fig leaf.

The scent is named after the cry of a rooster, a noise that Jean Paul Gaultier likens to the cry of a warrior. The energetic, explosive sound was channelled into a fragrance by Olivier Cresp and Annick Menardo, creators of Armani Attitude and DSquared2 Potion.

The striking bottle design features a man’s face in profile, and when turned to the side it resembles the iconic Le Male torso. The accompanying ad campaign starring Spanish model Jon Kortajarena has been making waves, too – check out the video below to get a feel for the spirit of the scent.

Jean Paul Gaultier Kokorico is available in 50ml and 100ml Eau de Toilette sprays, plus a fragranced Shower Gel, a Deodorant Stick, and an After Shave Balm.

This entry was posted on Wednesday, January 11th, 2012 at 10:29 am and is filed under Fragrance, Men, New products. You can follow any responses to this entry through the RSS 2.0 feed. You can skip to the end and leave a response. Pinging is currently not allowed.

@escentual The team have been busy testing the most hyped #mascara of the moment! Find out which formulas came out on top in o… https://t.co/qdlHnqyDka
3 days, 9 hours ago • reply • retweet • favourite

@escentual Kate believes that we should all get excited by new suncare launches - and her third technology edit is centred aro… https://t.co/KAjHVxunJw
4 days, 9 hours ago • reply • retweet • favourite

@escentual @penelope_sun Hi Penelope, thanks for reaching out☺️ It is out of stock unfortunately, but you are able to reserve… https://t.co/u4y3vaEI74
5 days, 8 hours ago • reply • retweet • favourite