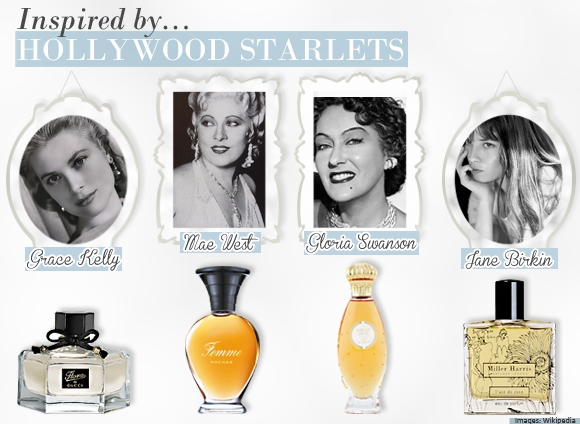 Fragrance inspiration can stem from some pretty diverse sources (Etat Libre d’Orange Secretions Magnifiques, anyone?). From the weather and places, to memories and dreams, to people or even food; perfume creators are informed by a wealth of experiences when they craft their fragrant creations.

For the first in our series of fragrance inspirations, we take a look at four iconic scents with some very famous Hollywood muses….


Grace Kelly inspired…
Gucci Flora
In 1966 Gucci created a silk scarf especially for the Princess of Monaco. The iconic print was named Flora, and became wildly popular as fans of the Princess strove to emulate her effortless style. The print was archived until Gucci’s latest creative director Frida Gianni, recognising its timeless appeal, revived it in a series of accessories and ready-to-wear items. Part of this revival included the creation of a decadent perfume, one that matched the allure and transcendental beauty of its muse Grace.

Mae West inspired…
Rochas Femme
Originally created in 1943, Rochas drew inspiration from the legendary curves of actress Mae West for its signature Femme scent.  Mae’s irreverent sense of humour and inherent sensuality are a perfect match for the warm, aromatic scent. The fragrance evokes all of the glamour and intrigue of a leading lady, with notes of cinnamon, jasmine, leather and ylang-ylang. A seductive and heady blend that inspires confidence.

Gloria Swanson was inspired by…
Caron Narcisse Noir
“Her head thrown back, with her provocative eyes and fulsome lips, Gloria Swanson immortalises the very essence of this perfume in the film Sunset Boulevard, when she langourously utters the words “Black Narcissus.”” Gloria’s iconic turn as Norma Desmond in Sunset Boulevard is said to have been inspired by this provocative fragrance, a complex ode to the narcissus and the orange blossom.

Jane Birkin created…
Miller Harris L’Air de Rien
Style icon and actress Jane Birkin drew inspiration from her favourite things for this scent, a collaborative effort with Miller Harris founder Lyn Harris. From her father’s pipe to dusty libraries full of old books, bouquets of flowers to the muskiness of skin, the scent is both vintage and modern. A fragrance as quirky and timeless as Jane herself.

Have any more suggestions? Leave us a comment below!

I love this perfume so much! It's very earthy and feminine but not too strong or overpowering. I get compliments on it all the time.

This entry was posted on Tuesday, March 20th, 2012 at 9:34 am and is filed under Fragrance. You can follow any responses to this entry through the RSS 2.0 feed. You can skip to the end and leave a response. Pinging is currently not allowed.

@escentual Try the E-S-C-E-N-T-U-A-L SPF application method so you're always safe in the sun. Here are our #SunPoverty ambassa… https://t.co/lx3zk5o6Ym
1 day, 13 hours ago • reply • retweet • favourite

@escentual News just in! There's still time to enter our Instagram competition to be in with a chance of winning the Initio He… https://t.co/nbuTzL5pH0
2 days, 13 hours ago • reply • retweet • favourite

@escentual Thank you, Issey Miyake, for making the fragrance and fashion world a more beautiful place❤️ Your legacy will live on forever #isseymiyake
3 days, 16 hours ago • reply • retweet • favourite

@escentual We're prepared for a week of sunshine here at Escentual with our #summer makeup bags ready to go! ☀️ Head over to… https://t.co/7mvMCFbQRT
4 days, 8 hours ago • reply • retweet • favourite