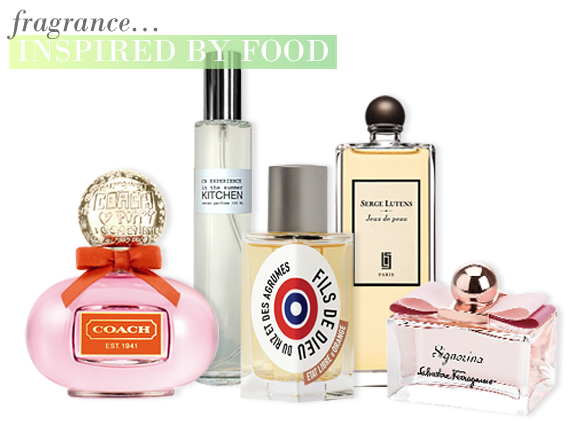 The third post in our ‘Inspired By…’ series has taken on a gourmet twist. Today, the majority of fragrances comprise fruits or spices, but there are a small number that contain more unusual foodstuffs. From vegetables to confectionery, here we take a look at five intriguing scents which are inspired by food…

Coach Poppy
We’ll kick things off with a sweet treat. Coach Poppy contains not one, but three unusual food notes. In the top notes, a bite of crisp cucumber lends clarity and freshness. In the heart, a vanilla-laden crème brûlée accord envelops the skin in sweetness, before a marshmallow accord in the drydown rounds off the light and fluffy fragrance.

CB I Hate Perfume In The Summer Kitchen
This fragrance is inspired by the scent of freshly cut vegetables and wooden rafters warmed by the summer sun. For the scent, Christopher Brosius was inspired by his own tiny kitchen on his family’s farm, which has retained the aroma of two centuries worth of cooking. This is a very foody scent which emulates the true fragrance of vegetables.

Etat Libre d’Orange Fils de Dieu
One of the many inspirations for this new Etat Libre d’Orange scent was Thai cuisine, and from the first sniff this is very apparent. The key composition revolves around lime, ginger, coconut and rice notes, which ideally reflect Thai food culture, together with spiced notes of cardamom, coriander and shiso. A zesty yet creamy fragrance with added bite.

Serge Lutens Jeux de Peau
One of the most comforting smells in the world, according to Serge Lutens, is the smell of freshly baked bread. In this composition a finely crafted bread note takes center stage, while notes of spices, liquorice, immortelle and amber evoke the warmth of a freshly baked loaf. Added woody notes evoke the toasted aroma of the bread, making for an  intriguing sensorial experience.

Salvatore Ferragamo Signorina
My last pick is another sweet scent, the brand new Salvatore Ferragamo Signorina. This fragrance unveils its gourmand surprise in the drydown, after the more conventional notes of currants, pink pepper and jasmine: a creamy and joyful pannacotta note, which lends a sweet vanilla character. This scent is so wonderfully creamy that is smells almost like an  ice cream sundae.

CB I hate perfume In the Summer Kitchen 100ml

I'm a small fan of Serge Luten's fragrances, I've got those I love (Ambre Sultan), those I like but can't wear (Clair de Musc) and those I'm not afraid to wear as a weapon (Muscs Koublai Kahn - MKK) so I was eager to wrap myself in his latest fragrance, Jeux de Peau. Allegedly, Jeux de Peau is meant to remind the wearer of warm buttered toast, I'm not sure if I get that, but I definitely get something... Straight of the bat, at first sniff there is something odd. There is a sort of, basically, uriney note. It's very brief so don't panic, and I think it actually works to hold everything together. Lutens clearly isn't scared of inappropriate animalics. If you've ever smelt MKK with its legendary opening "fecal" note then you'll know what I mean. It feels wrong at first, but then it starts to work. But after that, WOW, what I get after that isn't toast, but pistachio. Specifically, salty crushed pistachios, maybe mixed in with buttery toffee. There's a burnt sugar note in there too, when you notice the Immortelle, in it's Maple form rather than Aniseed or Liquorice. A real spicy sweetness that absolutely works. As it dries down, it still manages to hold everything together amazingly well, the pistachio is still there, the maple, and something slightly fruity, like caramelised figs. Overall, there's an oddness to the fragrance which means it won't be a crowd pleaser, not everyone will love this. It sort of feels like it's not a Real Life scent, but something you'll wear walking through a frostbitten forest. I think it's brilliant, give it a go.

This entry was posted on Wednesday, May 2nd, 2012 at 8:30 am and is filed under Fragrance, Special Post, Spotlight On. You can follow any responses to this entry through the RSS 2.0 feed. You can skip to the end and leave a response. Pinging is currently not allowed.

@escentual We’ve reached out to some of the members of Team Escentual to learn about their personal experience of stressed ski… https://t.co/nK3Ygh6Qex
19 hours, 29 minutes ago • reply • retweet • favourite

@escentual Wondering what products we’ve recently reached the bottom of? Learn all about our latest beauty empties with our re… https://t.co/PtiptYZkQN
1 day, 13 hours ago • reply • retweet • favourite

@escentual There’s no doubt about it: stress affects everyone differently. So, we've reached out to three members of Team Esce… https://t.co/95BD1Ocotg
2 days, 15 hours ago • reply • retweet • favourite