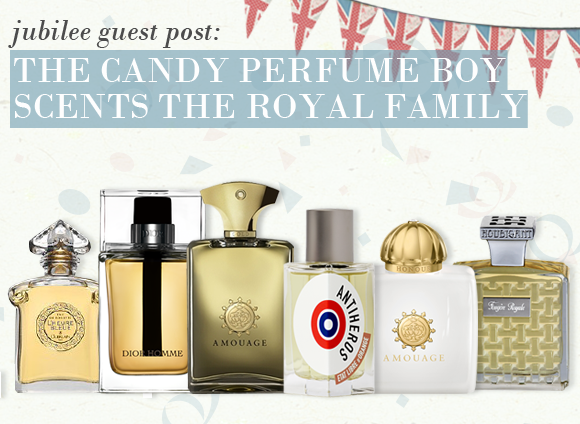 I’m sure the Queen is going to be receiving some lovely presents for her Diamond Jubilee, perhaps she’ll even get some nice perfume, but I think the best present would be the opportunity to be ‘scented’ by The Candy Perfume Boy, and being the generous guy I am I thought I would extend this honour to not just Her Majesty but also to a number of members from that lovable bunch of misfits that is the rest of Royal Family.

Love them or hate them you cannot deny that our Royal Family is chock full of characters, each one more strange than the next, and it’s fair to say that their choices of fragrance need to be pretty distinct to match their strong personalities. This post simply skims the surface of the multi-coloured, patchwork quilt of individuals that makes up our Royal Family 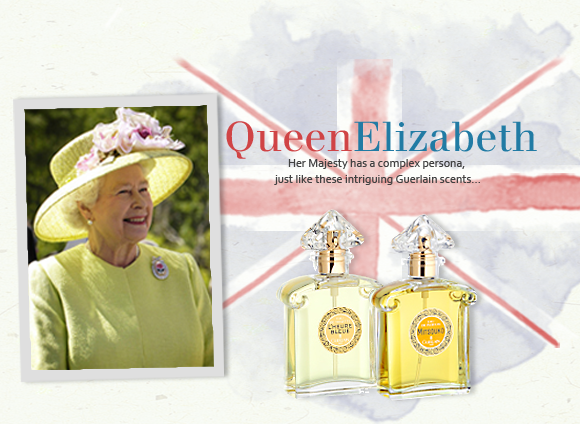 H.R.H. Queen Elizabeth II
Seeing as it is her Jubilee and she is the Queen, it is only fair that we should start with Queen Elizabeth II. The Queen, or Liz as I like to call her, is the stoic matriarch and I very much see her as the glue that holds the family together. Despite her sometimes-aloof demeanour the Queen is reputed to have a wicked sense of humour and you just know that she is a no-nonsense kind of gal.

It stands to reason then, that any perfume we choose for the Queen cannot be staid or dull, she needs something rich and multi-faceted to represent such a complex persona. When I think of “complex” only one perfume company springs to mind – the house of Guerlain. Seeing as Liz is reputed to wear one of Guerlain’s most classic fragrances, the über-French olfactive pastry that is L’Heure Bleue, I think she would perfect for yet another Guerlain classic, the rich, mysterious and complex chypre Mitsouko. You could spend 1,000 years trying to fathom out what makes her tick, but you’ll never fully understand her. 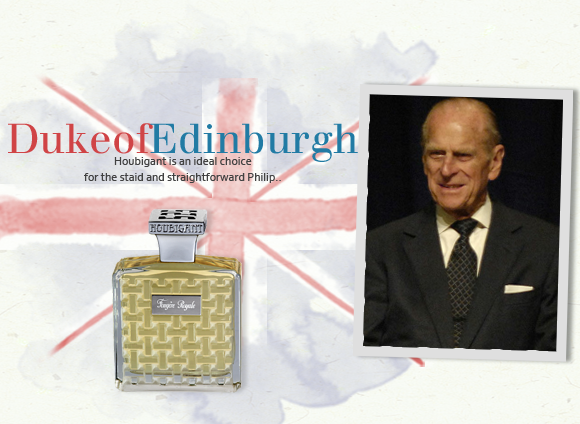 Philip, Duke of Edinburgh
No member of the Royal Family is richer in character (and grumpiness) than the Duke of Edinburgh. Phil – do you think he’d let me call him Phil? You’re right, it’s probably best not to – Prince Philip may not be wearing the trousers in the relationship, he is married to the Queen lest we not forget, but he does appear to definitely assert some patriarchal pressure upon the family.

I see him as someone who probably isn’t too fussed about wearing any form of fragrance; he will do it simply because it is something that “one does” and possibly because Liz nags him if he doesn’t. I would imagine, and of course this is pure speculation on my part, that he leaves most of his fragrance-related choices to his staff, or maybe even the Queen, as he mumbles something about “having no bloody clue why people bother”.

Prince Philip would opt for something that is functional, masculine, classic and expensive such as Houbigant’s Fougère Royale, a rich, spicy fougère accented by citrus, herbs and woods. 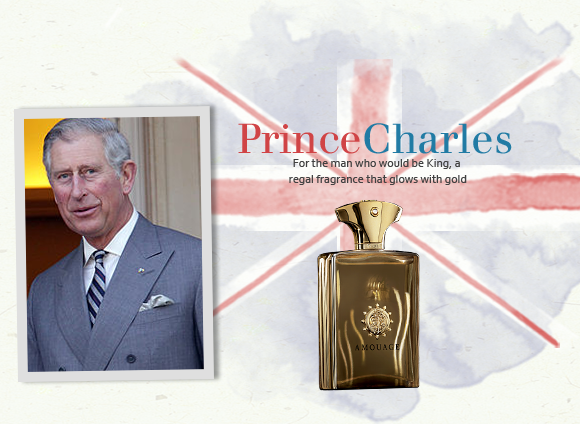 Charles, Prince of Wales
Oh Charles, will you ever be King? Liz doesn’t seem to be going anywhere soon, she’s strapped herself into the throne, stapled the crown on to her head and she’s not budging, not for anyone!

Prince Charles’ heyday was in the 80s, now it seems that he has moved aside for the next generation, the likes of “Wills”, Kate and Harry and no matter how insistently he keeps humming the Lion King classic “I Just Can’t Wait to be King” Liz isn’t taking the hint.

So what perfume would suit this 80s Prince? Personally I see him in something big and bold in the typical 80s style, perhaps something that is undeniably masculine with a touch of feminine sensitivity. Amouage’s Gold Man fits the bill perfectly with its ballsy blend of florals, incense, rich woods and animalic notes, and seeing that it was commissioned by the Sultan of Oman, I would say that it is suitably royal enough for a maybe-future king. 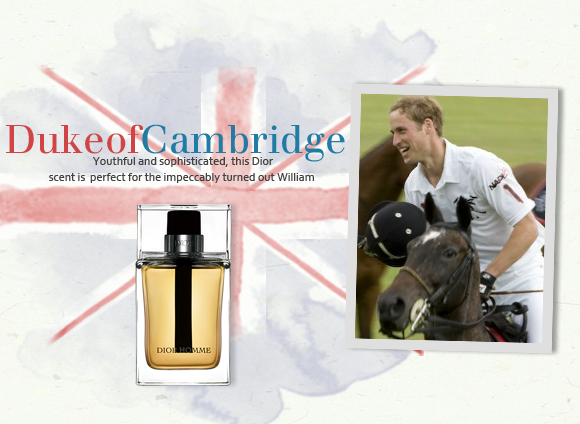 William, Duke of Cambridge
Prince William represents the modern era of the Royal Family. He’s a breath of fresh air in a family that, at times could be called “stuffy”, “cold” and “un-emotional”. As a new breed of Royal, William is able to present himself in a slightly more casual way, but he always manages to be impeccably turned out.

Dior Homme is a pretty spot on representation of Prince William, it’s a scent that manages to straddle the lines of smart & casual perfectly as well as it striking the right balance between masculine & feminine. Dior Homme is a scent that is casual enough for the modern man but also refined and smart enough for the modern Royal. Wills would rock it rather well I think. 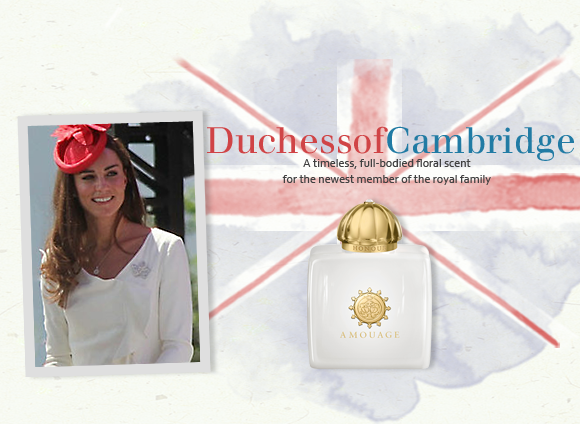 Catherine, Duchess of Cambridge
Not only is Catherine (formerly known as Kate Middleton) the newest member of the Royal Family, she is also the most sought-after, proving that what this empiric dynasty needed was some new blood.

Catherine is so in-vogue right now; she’s the high-fashion princess, demure but always exuding warmth. On her wedding day she chose a relatively unobtrusive white floral to match her lily of the valley bouquet and stunning Sarah Burton for Alexander McQueen gown.

Seeing as she likes white florals, and who can blame her they are the best kind of fragrance after all, I think she should kick it up a notch and go for something that transcends her prim nature, a white floral scent that is full bodied and weighty, but not overpowering or overtly sexy. Amouage has a flawless offering, the euphorically beautiful Honour Woman. 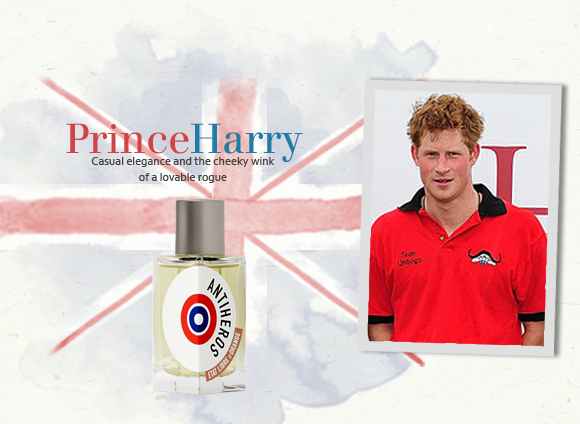 Harry, Prince of Wales
Now I like all of my Royals equally but if I were forced to pick a favourite then my answer would be Prince Harry, no question. Harry is the cheeky chappy who doesn’t always follow the rules, in fact sometimes he’ll cross so far over the line he can’t even see it, and the word “rule” itself is probably foreign to him.

Harry’s style is that of the well-to-do man about town, a mixture of should-be-smart tailoring mixed with an unfussy, un-refined attitude. I imagine him casually rocking the musky, waxy lavender of Etat Libre d’Orange’s Anitheros, his hair slightly ruffled and shirt un-tucked, because after all, he is the lovable rogue, fun and daring but oblivious to other people’s opinions.

Etat Libre d'Orange Antiheros is pure and simple lavender. Big and unapologetic, sweeping into a room and instantly becoming the center of attention. It's bright, medicinal, stylish as anything, utterly pigheaded and completely charming. There's always a worry with Lavender that it will be "granny smell". This couldn't be further away from that! It's stoically masculine, spicy, soapy, but simple and straight-to-the-point. Antiheros doesn't dry down much, it's very take it or leave it. It's also one of the finest lavender fragrances money can buy. If you're not sure about the sheer brunt of lavendar, and want something more tempered, try Caron's Pour Un Homme, recommended below, for something a bit more apologetic (but where's the fun in that?!)

This entry was posted on Thursday, May 31st, 2012 at 5:00 am and is filed under Fragrance, Guest bloggers. You can follow any responses to this entry through the RSS 2.0 feed. You can skip to the end and leave a response. Pinging is currently not allowed.

@escentual Try the E-S-C-E-N-T-U-A-L SPF application method so you're always safe in the sun. Here are our #SunPoverty ambassa… https://t.co/lx3zk5o6Ym
14 hours, 4 minutes ago • reply • retweet • favourite

@escentual News just in! There's still time to enter our Instagram competition to be in with a chance of winning the Initio He… https://t.co/nbuTzL5pH0
1 day, 14 hours ago • reply • retweet • favourite

@escentual Thank you, Issey Miyake, for making the fragrance and fashion world a more beautiful place❤️ Your legacy will live on forever #isseymiyake
2 days, 16 hours ago • reply • retweet • favourite

@escentual We're prepared for a week of sunshine here at Escentual with our #summer makeup bags ready to go! ☀️ Head over to… https://t.co/7mvMCFbQRT
3 days, 9 hours ago • reply • retweet • favourite