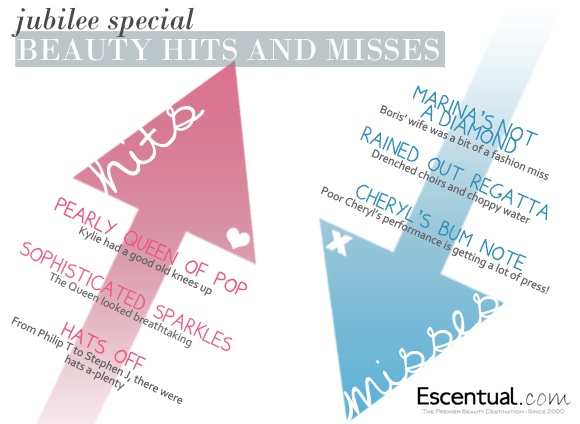 Kylie stole the show by dressing up as a traditional pearly queen complete with trademark hotpants at the  Royal Jubilee Concern – she looked absolutely amazing.

… as did the other queen, woman of the hour Queen Elizabeth. She rocked tasteful sparkles all weekend long, including a breathtaking gold number that knocked years off her.

There were some incredibly beautiful hats on show at the various jubilee events, particularly from renowned milliners Phillip Treacy and Stephen Jones.

Marina’s Not A Diamond

It was hard to find fashion misses this weekend – everyone truly pulled out all the stops. If we had to choose, we weren’t the biggest fans of the ensemble worn by Boris Johnson’s wife Marina, which was a little ill-fitted.

As beautiful as the regatta was, it was a shame to see so much rain! Despite the wash-out it was fantastic to see the unquenchable spirit of the performers despite being soaked to the skin.

We love Cheryl, but it’s been hard to escape news of her less than favourable performance at the Jubilee Concert this weekend. She did look incredible, though!

This entry was posted on Thursday, June 7th, 2012 at 9:09 am and is filed under Special Post. You can follow any responses to this entry through the RSS 2.0 feed. You can skip to the end and leave a response. Pinging is currently not allowed.

@escentual Happy December 1st! 🎄 If you're ready to get in the festive spirit (or already in full festive mode), we think you… https://t.co/9z8q2WA6MK
2 days, 23 hours ago • reply • retweet • favourite

@escentual Kick off the Christmas party season with great hair and makeup! Choose your Christmas party look with the help of u… https://t.co/wDbqQGyKbL
4 days, 13 hours ago • reply • retweet • favourite

@escentual How are you going to wear your hair for the Christmas party season?🥳
4 days, 15 hours ago • reply • retweet • favourite