Would you go out without Make-up? 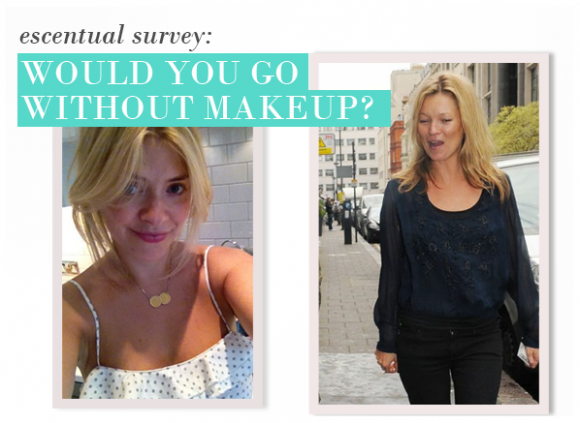 Following Holly Willoughby’s decision over the weekend to tweet a picture of herself without make-up, an overwhelming majority of our customers have confessed they would never go to work without putting on beauty products first.

And it’s not just us that have been talking about Holly’s ‘naked’ face tweet – the Daily Mail’s Liz Jones has released a scathing article claiming that “Holly’s betraying women by going barefaced” (Read the full article here)!

Not that we agree with Liz, but after counting our survey results we’ve discovered that a staggering 91% of you said they couldn’t do a “Holly Willoughby” on a night out and appear in public without make-up on. And 64% said you would not consider going to work without having some degree of make-up. Understandable when women are put under so much pressure to look good, especially in an often male-dominated workplace.

So it seems that while we feel the need to look good when it’s a more formal situation, we are a lot more relaxed when just popping down the shops. The tweet results show that over half of us would broadcast our bare faces to the world via social networks – which is surprising as, in theory, there is a lot less control over who will see you sans cosmetics (though I have a sneaking suspicion that a lot of people, like me, would only post their most flattering and well-lit no-makeup pics!)

What are your thoughts on going makeup-free? And would you go so far as saying that women without make-up are “the ultimate playground bullies” – as suggested by Liz Jones?

This entry was posted on Thursday, June 28th, 2012 at 3:28 pm and is filed under Lifestyle, Make-up, Survey. You can follow any responses to this entry through the RSS 2.0 feed. You can skip to the end and leave a response. Pinging is currently not allowed.

@escentual Happy December 1st! 🎄 If you're ready to get in the festive spirit (or already in full festive mode), we think you… https://t.co/9z8q2WA6MK
2 days, 23 hours ago • reply • retweet • favourite

@escentual Kick off the Christmas party season with great hair and makeup! Choose your Christmas party look with the help of u… https://t.co/wDbqQGyKbL
4 days, 13 hours ago • reply • retweet • favourite

@escentual How are you going to wear your hair for the Christmas party season?🥳
4 days, 15 hours ago • reply • retweet • favourite