Win Carolina Herrera 212VIP for him and her 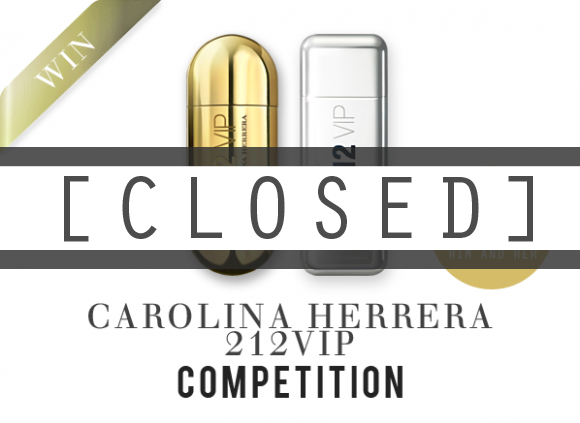 Don’t just go to the party – be the party! Inspired by New York nightlife, Carolina Herrera 212 VIP for Him and for Her seduce with their cocktail-like notes and statement metallic bottles. They’re on every guest list, and in every VIP area.

Want a slice of the action? We have a bundle that contains 1x 212 VIP Men Eau de Toilette and 1x 212 VIP Women Eau de Parfum up for grabs – and we’re giving them away to one lucky winner.

To enter, simply answer the question below by midnight on Sunday 12th August.

Terms and Conditions
Only one entry per person (based on IP address) will be counted. Automated entries will be disqualified from the prize draw. Entries will close at midnight on the Sunday 12th August, and prize winners will be notified the following day. One winner will be picked at random. Escentual reserves the right to withdraw any nominations or votes if they feel they are abusing the competition or any of its rules. General Terms & Conditions apply.

This entry was posted on Tuesday, July 31st, 2012 at 2:00 pm and is filed under Competitions, Fragrance. You can follow any responses to this entry through the RSS 2.0 feed. You can skip to the end and leave a response. Pinging is currently not allowed.

@escentual Kick off the Christmas party season with great hair and makeup! Choose your Christmas party look with the help of u… https://t.co/wDbqQGyKbL
18 hours, 10 minutes ago • reply • retweet • favourite

@escentual How are you going to wear your hair for the Christmas party season?🥳
20 hours, 29 minutes ago • reply • retweet • favourite

@escentual Do you ever wear a particular perfume because it makes you feel a certain way? We certainly do! And we thought we'd… https://t.co/nnkFkKFwpp
6 days, 4 hours ago • reply • retweet • favourite