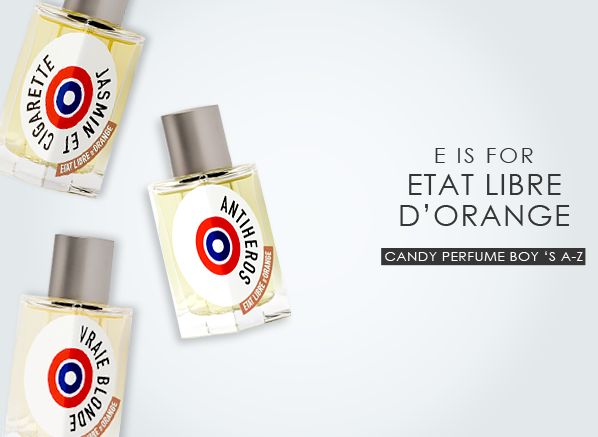 E is for Etat Libre d’Orange

Perfume is fun. That may sound like a completely obvious statement, but in a world where scenting oneself is mainly a necessary and every-day chore it is one worth noting. For many there is nothing more exciting than exploring the fantastical wonderland that is the world of perfumery and amongst the more familiar offerings a keen explorer can discover a plethora of intriguing, beguiling and even challenging scents that open one’s mind to all that is and can be scent.

No brand is more successful at creating fun than Etat Libre d’Orange (The Orange Free State). Founded by Etienne de Swardt in 2006, these punky olfactory pop artists declare independence with the war cry – “Perfume is dead, long live perfume” and in collaboration with some of the industry’s greatest perfumes they create a range of contemporary, beautiful and sometimes difficult scents that challenge ones perception of what constitutes a perfume.

The brand is perhaps most famous, nay infamous for their ode to bodily fluids aptly named Sécrétions Magnifiques (Magnificent Secretions). Created to smell like blood, sweat, sperm and saliva, Sécrétions Magnifiques is an olfactory tour de force that will either send your eyes rolling in ecstasy or your stomach churning in disgust.

To my nose it smells like milky white flowers abused by a strong metallic accord and a hint of wet dog that has the half-life of enriched uranium. It may sound pretty awful and to some noses it is, but what Sécrétions Magnifiques does perfectly is show how perfume can challenge and shock and for that reason it is one of the most unique compositions on the market.

With Sécrétions Magnifiques in mind one would expect Etat Libre d’Orange’s ode to the hyper-masculine drawings of gay Finnish erotic artist Touko Laaksonen (aka Tom of Finland) would be an all out raunch-fest of burly moustache-clad muscle bunnies, motorbikes and leather. However it is anything but and perfumer Antoine Lie opts to highlight the playful aspects of Tom of Finland’s drawings, mixing suede and leather with aldehydes (the fizzy sparkle in fragrances such as Chanel N°5) over a base of velvety vanilla and tonka. The whole thing smells like squeaky-clean rubber and plays up the ‘good clean fun’ vibe that sums up Tom of Finland’s art.

Fils de Dieu du Riz et Des Agrumes (Son of God of Rice and Citrus Fruits) is another novel offering from the Orange Free State. Also sold under the less than politically correct moniker of ‘Philippine Houseboy’, Fils de Dieu is a tribute to thai cuisine and steamy massage parlours. The result is a delicious serving of lime and coriander-infused coconut milk with a photorealistic dollop of starchy rice. Despite the novelty factor Fils de Dieu is a refreshing take on the gourmand genre and what’s more it is effortlessly wearable.

A rice note is also used in the fabulously named Putain des Palaces (Hotel Slut), a fragrance that takes an olfactory snapshot of the glammed up girl – the face powder, the strong perfume – and mixes it all up with an accord that smells like slept-in sheets impregnated with warm, sweaty bodies.

Vraie Blonde (True Blonde) however, is the smell of the party girl the morning after the night before – a night that may have involved one (or ten) too many peach Bellini’s. It starts with aldehydic fizz and over-ripe, fermented fruits before settling on a base of carnal ambergris and musk, hinting at unclean skin. Nearly as much fun as that night out…

Not everything Etat Libre d’Orange offers is bonkers and last year’s The Afternoon of a Faun is a perfect example of how the house can surprise with scents that a little bit more on the classic side. Inspired by Nijinsky’s ballet of the same name and made in conjunction with performance artist Mx Justin Vivian Bond, The Afternoon of a Faun serves a modern interpretation of the time-honoured chypre accord of oakmoss, labdanum and patchouli.

This modernisation sees the addition of a big Turkish Delight-esque rose up top and a core of immortelle, a note that adds facets of curry spice, maple syrup and something indescribably animalic. The Afternoon of a Faun takes you for a walk in the stifling air of the forest and lays you down on the soft grass, amongst the moss and tree stumps. What happens during this afternoon walk remains a mystery waiting to unfold on the skin.

Jasmin et Cigarette is another reinterpretation of a classic genre. It harks back to the old school florals of the Hollywood era and paints the image of a vamp-like and rouged beauty smelling of jasmine perfume and smoking on a cigarette. The perfume is as literal as its name but the cigarette part is more evocative of a freshly opened pack of Marlboro’s than anything that has been lit.

Like This and Rossy de Palma Eau de Protection are the house’s celebrity offerings and in line with their unique approach to perfume, Etat Libre d’Orange’s celebrity muses are anything but ordinary. Tilda Swinton’s scent (Like This) is a homely fragrance that smells like ginger, pumpkin pie and maple syrup and Rossy de Palma’s is a sour, blood-red rose with a thorny base of patchouli. Both are striking, addictive compositions worthy of their equally striking and addictive namesakes.

My final pick from the brand is perhaps the most understated but definitely not the most underrated. Antiheros is Etat Libre d’Orange’s take on the ever-familiar note of lavender. What you get with this scent is a herby, waxy ball of lavender that is accented by enough musk to make it lively, airy and reminiscent of clean soap. If you think you hate lavender you must try Antiheros, it will change your whole view of the note because it smells so modern (there isn’t a Granny in sight here) and surprisingly masculine.

Have you dared to explore the free-thinking world of Etat Libre d’Orange? What are your favourite scents? Let me know your thoughts!

I tried this as part of the taster set from Etat Libre d'Orange and this was my favourite. It transports me to faraway lands where it's Christmas every day and the world is full of gingerbread houses! A lovely light yet deep & complex scent-starts off with a very 'orange' scent, reminiscent of Tilda Swinton's hair! Then dries down to a lovely soft, sweet musky scent with cloves, cinnamon, black pepper & pumpkin. I can't wait until it's winter again so I can wear it. If you love gourmand scents you'll love this.

This entry was posted on Monday, March 18th, 2013 at 10:05 am and is filed under Brand Focus, Candy Perfume Boy, Fragrance, Special Post, Spotlight On, Tried & Tested. You can follow any responses to this entry through the RSS 2.0 feed. You can skip to the end and leave a response. Pinging is currently not allowed.

@escentual Do you find applying SPF to your little one tricky? Try these three ways for making sure you apply SPF correctly to… https://t.co/Kw1Z1INnxA
4 days, 10 hours ago • reply • retweet • favourite

@escentual Looking for that #FridayFeeling? Prada Paradoxe is the perfect floral scent to carry you through whatever you have… https://t.co/ZzU00dQGmY
5 days, 3 hours ago • reply • retweet • favourite

@escentual If you cringe when we say: orange lines, white patches, tiger bread skin, streaks, and an orange hair line, then yo… https://t.co/pKqar5xzYg
6 days, 53 minutes ago • reply • retweet • favourite