Gucci Guilty Black For Women and For Men 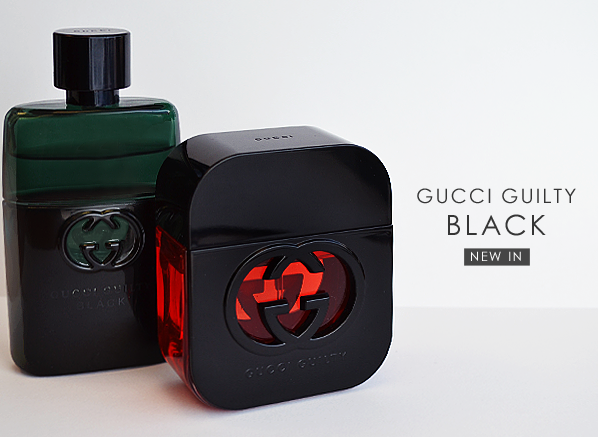 I’m not going to talk about these two in terms of their intensity, because they’re not  intense in the truest sense of the word. Rather, they’re amplified versions of their predecessors: Gucci Guilty Black for her is muskier and sweeter, and Gucci Guilty Black for him is greener and woodier.  This Black duo, ironically, is pretty colourful, and that’s something that I really enjoyed. 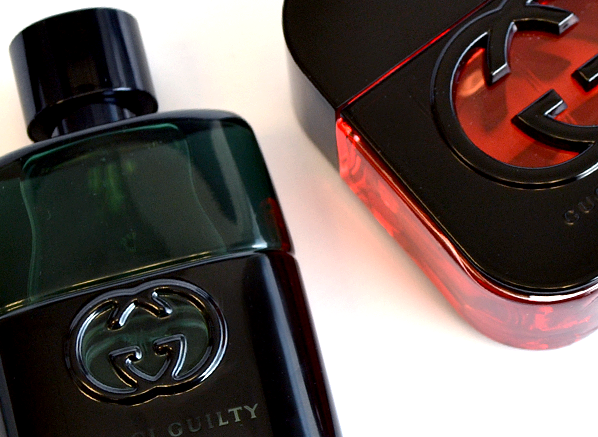 Gucci Guilty Black For Women
Upon first spray Gucci Guilty Black is all fruits and musk. An all-too quick flash of cherry mellows into a red berries accord, which is in turn subtly heated with piquant pink pepper. Like the original, it’s flora that really structure the proceedings. Only this time it’s the sweet and musky warmth of violet rather than lilac, a signature note that becomes more pronounced as the scent progresses. In the base, the sumptuous, dark woodiness of patchouli reigns, aided once more by a glowing amber note.

I like this fragrance; it’s in the same sweet/musky/floral family as Vivienne Westwood Naughty Alice and Van Cleef & Arpels Feerie, both of which I wear. If you like either of those two scents, I would recommend giving this one a go. Don’t be put off by the dark packaging and marketing; the fruitiness makes this one entirely appropriate for daytime wear.

Gucci Guilty Black Pour Homme
The composition of Gucci Guilty Black for men, surprisingly, has a more pared back structure than the original Guilty. These streamlined notes are overdosed, creating a sense of immediacy and ‘instant seduction’.  The scent kickstarts with a metallic lavender and coriander accord, which is greener than I would have expected.  Like its female companion, the potency of these top notes don’t last for long. The heart is a slightly sweet and minimally solar orange flower accord, and a resolute base of patchouli replaces the medley of woods from the original.

The coriander note in this scent isn’t to my particular taste; it makes the already cool lavender note feel colder, and alters the warmth of orange flower and patchouli. I know there are a lot of coriander fans out there though – if you’re one of them, then you should definitely give Gucci Guilty Black a whirl. Similar scents include BVLGARI Pour Homme Extreme, and the slightly spicier Marc Jacobs Bang Bang.

What are your thoughts on the two new scents?

This entry was posted on Thursday, April 25th, 2013 at 11:05 am and is filed under Fragrance, Men, New products, Spotlight On, Tried & Tested. You can follow any responses to this entry through the RSS 2.0 feed. You can skip to the end and leave a response. Pinging is currently not allowed.