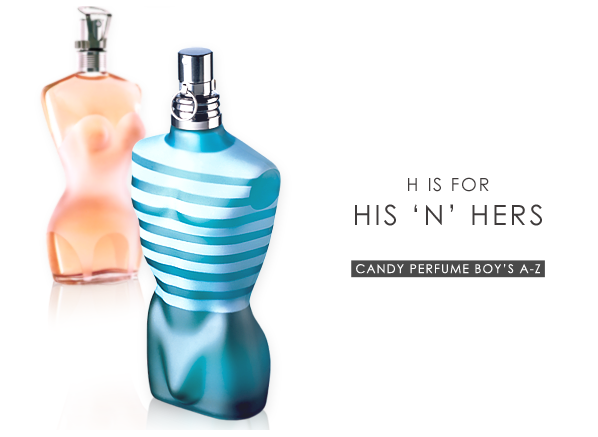 Throughout my time as a blogger, perfume lover and general nosy nose I have most definitely laboured the point that gender, when it comes to scent, is pretty much obsolete.  The way I look at it is as human beings we are walking scent receptors that smell both consciously and subconsciously, constantly sucking in and reading the aromas around us and sorting them into neat categories such as warm, cold, bitter, sweet, pleasant and ghastly, but never into the masculine or feminine – one would never pick up an apple or a burned piece of rubber and think “hmmm…this is rather butch…” now would we?

So gender may not necessarily be vital to the world of perfume but it certainly is relevant, with most brands choosing to offer their scents in either masculine or feminine guises.

An interesting way of incorporating gender into the world of fragrance is perhaps the most obvious and well used – the feminine and masculine duo. These pairings set out to communicate a common theme but in palatably ‘feminine’ and ‘masculine’ ways to ensure appeal to both the sexes.

The best of these pairings aren’t those that appear as two similar compositions that aren’t really bold enough to make too much of an impression on anyone, but are those that carry a theme through two perfumes in a unique, varying and all-together cohesive way.

Here are three of my favourite feminine and masculine pairings and remember, guy or gal you should always wear what you love!

Jean Paul Gaultier’s pillar feminine and masculine fragrances  – Classique and Le Mâle – are not your typical feminine/masculine duo. For starters Classique preceded her brother by two years and both scents showcase very different styles and themes of perfumery.

Classique is a voluptuous and buxom floral oriental with notes of rose, orange blossom and vanilla. The whole thing smells like rose-scented face powder left on the slept-in sheets from the night before. Le Mâle on the other hand is a contemporary barbershop fougère with sugary sweet lavender and enough vanilla to knock down a charging bull with one spritz.

What links both scents together is tradition – both perfumes are contemporary twists on classic styles, each typically ‘feminine’ or ‘masculine’ in their respective ways. They may not share notes but they both share a gauche spirit that epitomises all that is Jean Paul Gaultier – naughty but nice.

Angel and A*Men by Thierry Mugler

The pairing of Thierry Mugler’s Angel and A*Men is a startling one, after all Angel is rather butch in the first place, why would she need a boyfriend to keep her company?

It is true that Angel has as many masculine parts (the stonking great big patchouli note) as she has feminine (all the candyfloss, caramel, fruits and chocolate) – she certainly gives off that ‘drag queen at weekends, builder called Steve during the week’ vibe – so it would surely be impossible to make things even more manly?

Not according to Thierry Mugler, who decided that it was in fact possible to out-butch Angel by throwing in just about everything possible – mint, lavender, coffee and tar to name a few – including the kitchen sink, thus A*Men was born.

Angel and A*Men are both unusual takes on the modern woman and man, highlighting the androgyny of both the sexes – the fierce runway Glamazon of Angel and the overly preened night clubber of A*Men – and creating perhaps the most cohesive yet divisive perfumed pairing of all time.

The good thing about Amouage perfumes is that they come in pairs, meaning there is always twice as much to fall in love with (potentially not so great for your bank balance, but hey let’s not worry about that) and ‘fall in love’ is something one ends up doing with Amouage far too often.

Last year’s feminine and masculine pairing – ‘Interlude’ – took inspiration from chaos, specifically a moment away from the hustle and bustle of every day life. In the same vein as Classique and Le Mâle both Interludes are polar opposites when it comes to smell but they share a theme of chaos followed by peace and calm.

Interlude Woman is a genuinely intriguing perfume that smells like nothing else on earth. It’s a melange of coffee, spices, woods and immortelle cut by a graffiti splash of vivid kiwi that defies any established perfume convention. Interlude Man, with its burning bonfire of birch tar, leather and vanilla, is just as striking as Woman and demonstrates the vivid crazy romance found in both fragrances.

One can only imagine the couple that would wear both Interlude Woman and Interlude Man – I see them as eccentric artists living crazy, passionate and creative lives and seeking solace and calm in their love for each other.

What makes a good feminine and masculine duo?

What are your favourites?

Do you and your partner wear corresponding scents?

I usually buy my husband these aftershaves, but could not get them from my regular shop. However, I ordered this for my husband and it arrived promptly, well packaged and the smell is very potent but not over powering. Will definitely be buying from this supplier again.

This entry was posted on Wednesday, May 1st, 2013 at 10:12 am and is filed under Candy Perfume Boy, Fragrance, Guest bloggers, Men, Special Post. You can follow any responses to this entry through the RSS 2.0 feed. You can skip to the end and leave a response. Pinging is currently not allowed.

@escentual Our tip to get through #BlueMonday is to spray your favourite mood-boosting fragrance. What scent have you got on t… https://t.co/xzWEQURcKs
4 days, 6 hours ago • reply • retweet • favourite