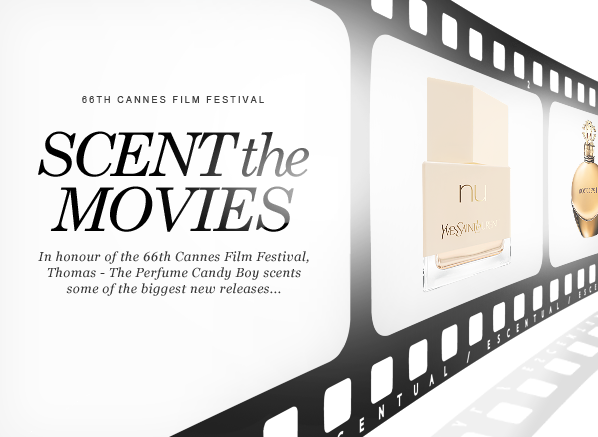 Today sees the opening of the 66th Festival de Cannes –one of the most glitzy and star-studded events in the Hollywood calendar. As Cannes gets underway one can’t help but get excited by the glamour on the red carpet, the drama on and off the screen and the flood of A-List stars soaking up the golden French sun and the attention of admiring fans.

Like many I am fascinated by the culture of celebrity, it seems that now more so than ever the focus is laid on who is in the movies more so than it is on the films themselves. I know for a fact that when I’m watching red carpet events my mind is doing two things; firstly it’s oohing/ahhing/cringing at the fashion and 2) is imagining what scents the celebs are wearing.

Picking scents for celebrities is easy (I make a habit of doing it on my blog) but what about the movies themselves? After all, a movie can have just as much personality, spirit and style as the stars that grace the red carpet, so surely they must have a perfume that would suit them too?

Always one to accept a challenge I have made for myself I have in this post paired up four new movie releases (two showing at Cannes and two on general release) that have distinct, perfume-worthy characters with fragrances that capture both their aesthetic and spirit. 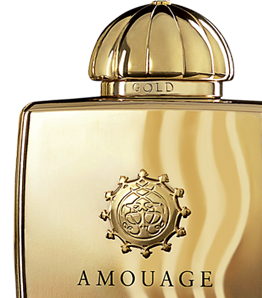 2013 will be known as the year of Great Gatsby Glamour thanks to Baz Luhrmann’s version of the critically acclaimed F. Scott Fitzgerald novel. With a mish-mash of 3D flapper girls, jazz, stunning visuals and a Jay-Z produced soundtrack featuring songs from just about everybody who is hot right now, Luhrmann’s Gatsby is an ode to the old seen through the eyes of a director who values all that is new and could often be criticised for his style-over-substance approach.

What does The Great Gatsby smell like? Gatsby is dripping in riches. Gatsby is loud, proud and demands your attention. Gatsby is a visual feast – a visual treat. Gatsby is the super-showy, über sexy and stunning aldehydic floral tones of Amouage Gold Woman. If you want to channel your inner ‘20s starlet with a fragrance that certainly has a 3D presence and shimmers with the flashing lights of the paparazzi then Gold Woman is the one for you. 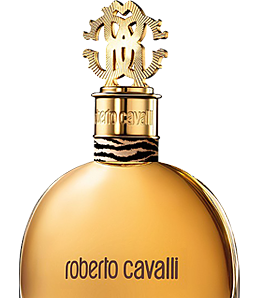 Sofia Coppola’s (The Virgin Suicides, Lost in Translation) The Bling Ring is the polar opposite to The Great Gatsby. Starring Harry Potter’s Emma Watson and inspired by true events, The Bling Ring focuses on a group of celebrity-obsessed teenagers who mastermind (perhaps ‘mastermind’ isn’t the right word here) a series of robberies from their favourite stars, namely; Lindsay Lohan, Paris Hilton and Megan Fox.

Whilst we cannot condone their actions (stealing is wrong ya’ll) the movie makes an interesting statement on the accessibility of celebrities due to changes in social media and the extraordinary lengths ordinary people will go to gain a piece of celebrity and fame, or in this case – infamy.

As for the scent, it’s all very LA, very du jour and soaked in hot sunshine. In my mind this all leads me to instantly think of the super syrupy sweet, sun-drenched floral aromas of Roberto Cavalli Eau de Parfum, a perfume that is as ‘LA’ as they come and served with a touch of Cavalli’s signature slightly-tacky-in-a-good-way animal print. Hello, it’s totally fetch…

The Place Beyond the Pines

I am not including this one just because it stars Ryan Gosling. OK, maybe that’s partly why I’m including it but my main motivation is the fact that it is a surprising and fascinating joy ride of a film.

Focusing on the interweaving lives of a bank robber and cop (played by Gosling and Bradley Cooper) The Place Beyond the Pines is an intense story with many a twist that switches narrative half way through.

Switching narratives is something that often happens with perfume, with many scents opting for a slow transition between top, base and heart notes. One fragrance however, showcases the twists of plot that make for such an intriguing (and at times jarring) journey shown in The Place Beyond the Pines – Fat Electrician by Etat Libre d’Orange.

Fat Electrician starts out with a blast of smoky vetiver and myrrh that calls to mind a wild, mossy bonfire before the whole thing switches tack in an instant, settling to a vetiver-soaked bed of delicious vanilla. It’s a fun ride that you’re not likely to forget in a hurry!

It would be a crime not to include the latest Pedro Almodóvar movie in a post such as this, the man is a legend after all. This 2013 release entitled ‘I’m so Excited’ is Almodóvar’s first comedy since Women on the Verge of a Nervous Breakdown in 1988 (if you have not seen this film I implore you to – it’s a classic!) and it’s described as being “a light, very light comedy” set almost entirely on an airplane.

But with all Almodóvar movies one can expect a degree of darkness and melodrama amongst all the fluffy lightness (it’s all those fiery Spanish tempers that does it) and these contrasts in mood make for a captivating movie experience.

A fragrance that follows suit in terms of mood is YSL’s Nu. Nu contrasts the zing of pepper and brightness of bergamot against the dark, moodiness of white flowers and incense. It is a true marvel of perfumery that brings both joy and an air of distant despair and I count it as a true masterpiece that is one of my all-time favourites, just as Almodóvar is one of my all-time favourite directors.

This entry was posted on Wednesday, May 15th, 2013 at 10:26 am and is filed under Candy Perfume Boy, Fragrance, Guest bloggers, Special Post, Spotlight On, Trends. You can follow any responses to this entry through the RSS 2.0 feed. You can skip to the end and leave a response. Pinging is currently not allowed.

@escentual Our tip to get through #BlueMonday is to spray your favourite mood-boosting fragrance. What scent have you got on t… https://t.co/xzWEQURcKs
3 days, 13 hours ago • reply • retweet • favourite