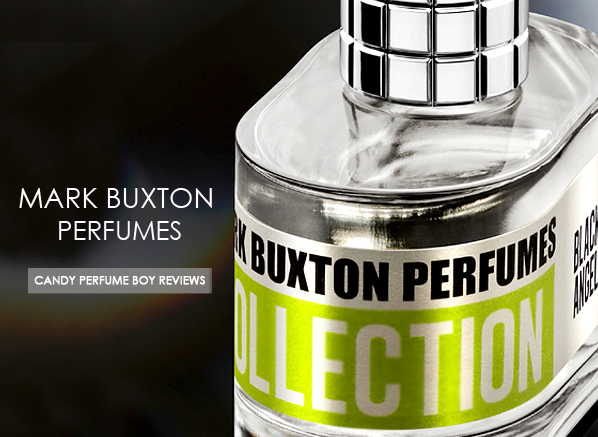 Mark Buxton is one of a small group of elite modern perfumers who have changed and shaped the landscape of perfumery as it is today.  Having created game-changing perfumes for avant-garde brands such as Comme des Garçons (CDG Eau de Parfum, 2 and 2 Man to name a few), Le Labo and Elternhaus in addition more mainstream outfits such as Givenchy, Van Cleer & Arpels and Salvador Dali, Buxton is a perfumer of great talent and even greater versatility.

In 2008, after many years working for designer brands, Buxton decided to go it alone and launch his very own line, one where he would have complete creative control over the perfumes he made.  The result is Mark Buxton Perfumes, a brand that plays with tradition and houses perfumes with a wonderfully wicked adoration for the naughtier side of life and love.

The Mark Buxton Perfumes line is for those that wish to defy convention with the perfumes they wear – the faint hearted need not apply.

Having smelled Buxton’s creations for other brands Sleeping with Ghosts came as somewhat of a surprise.  Being used to his usual oeuvre of pepper, incense and wood it takes a few moments to adjust to the supernatural marshmallow of a fragrance that is Sleeping with Ghosts.

In this ode to Buxton’s restlessness as a perfumer, delicious pink gourmand notes appear through a veil of translucency.  Crisp, sparkly quince (to wake Mr. Buxton up) in the opening pave the way for a delicate floral heart of peony and leather that is just so damn cosy you can’t help but nuzzle into it.

A touch of something iris-like gives the impression of baby pink powder in the heart before settling on a base of warm, cushy vanilla.  I’d classify Sleeping with Ghosts as adorable but intelligent, meaning that it has just the right amount of contrast to stop it from becoming a complete pink ball of fluff – intriguing stuff indeed. 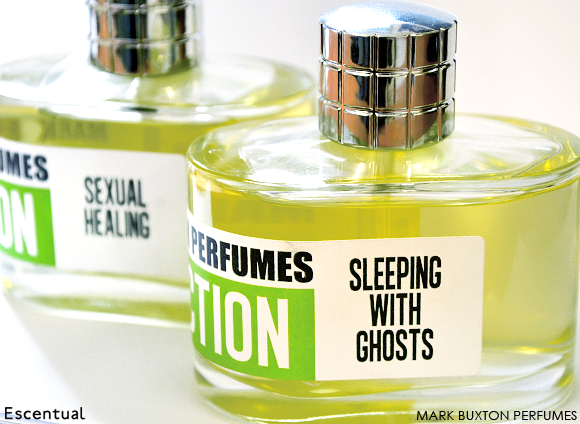 Sexual Healing is my personal favourite in the collection.  Inspired by an evening spent with a girlfriend, Buxton describes Sexual Healing as a “sensual skin scent” that showcases the peachy and apricot odours of osmanthus.  Here the osmanthus is wrapped in a veil of skin-like musk and is allowed to reveal its more animalic floral facets to create the illusion of sex.

The animalic funk of civet and Castoreum add a sour hum of filth in the base that resembles the soft and supple tones of leather.   Sexual Healing is animalic without treading dangerously into barnyard territory, instead it provides a new kind of funk – the warm, carnal and skin-line facets of hot flowers and fruit.

Buxton describes the note of absinth as being “awkward to dress up” due to its strong green and bitter facets, therefore it’ll be no surprise that his approach to the note is decidedly unusual.  Pairing it with notes of vetiver and clary sage, the absinth here is soapy and evocative of an old school gentleman’s aftershave.

Woods in the base strengthen the interplay between bitter spirits and earthy vetiver, allowing for a rugged intensity to shine through in the fragrance’s latter stages. It’s altogether rather impressive and shows absinth in an entirely new light, one where the darker aspects are tamed into a rather dapper presentation.

Devil in Disguise is a clever little beast, not least for the fact that in the opening it perfectly captures the piquant odour of rhubarb boiling on the stove, but also because it manages to become a complete shape shifter over time.  It may start out with the intense white heat of rhubarb but it settles down to something that is frankly subtle in comparison.

In the base the Devil’s disguise is removed for a much a simpler affair with a subtle patchouli musk taking centre stage.  It stands as a sharp juxtaposition to the intensity of the opening notes creating an olfactory tour de force that really does need to be smelled to be believed. 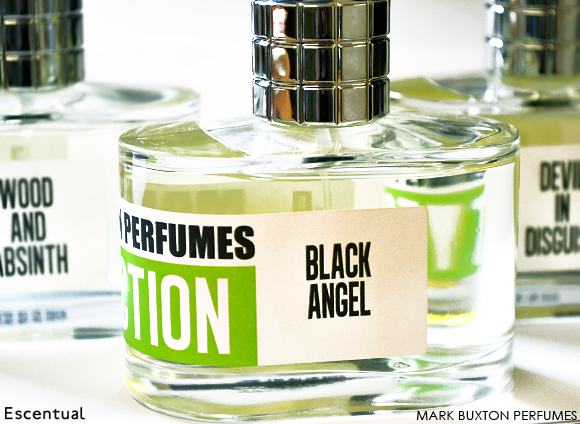 Created to be “the scent of a moment of serenity in a nightclub in downtown New York” Black Angel is perhaps the most classic and traditional perfume within Buxton’s line.  Opening with zingy citrus, accented by flickers of spicy ginger, Black Angel presents a heart of spiced iris and jasmine that is a contemporary take on classic florals of yesteryear.

Warm amber provides a snuggly end to the plush opulence of Black Angel’s dark opening, destroying any illusions of mystery that the perfume may have wished to hang on to.  If a touch of classic opulence with a contemporary edge is your thing then Black Angel is well worth a sniff.

This is a strong captivating fragrance. It seems to last forever and whenever I wear it I can smell it on my clothes still the next day. At first it has a aromatic citrusy, woody smell then dries down into a lovely warm sweet patchouli. Every time I wear it I get a complement. Great if you like to smell good all day long!!

This entry was posted on Wednesday, August 28th, 2013 at 10:45 am and is filed under Candy Perfume Boy, Fragrance, Guest bloggers, Tried & Tested. You can follow any responses to this entry through the RSS 2.0 feed. You can skip to the end and leave a response. Pinging is currently not allowed.

@escentual Looking to upgrade your skincare routine? If so, you might just want to try your luck with our @clarins_uk Super Re… https://t.co/8k5DDp4orI
3 days, 2 minutes ago • reply • retweet • favourite