A Guide to Fougere 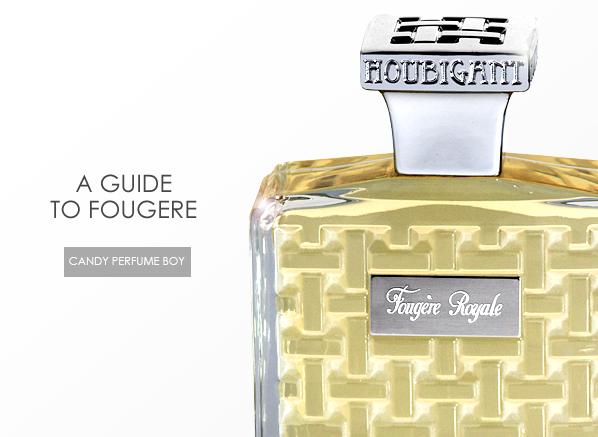 Most perfume genres are territories owned and populated by predominately feminine and unisex fragrances.  There are very few subsectors of the perfume world that cater solely to the taste of men and there is perhaps only one category that could be considered as a truly masculine style of perfumery.  That genre is the Fougère.

Fougère (meaning ‘fern-like’) is a style of perfume that originated in 1882.  Much like the birth of the chypre (its feminine counterpart), it all started with the launch of one perfume – Fougère Royale by Houbigant.  What this fragrance did was create an entirely new spirit of perfume that has influenced the way masculine perfumes are viewed and made, inspring an entirely new category of fragrance.

The basic Fougère accord consists of lavender, oakmoss and coumarin (an isolate from Tonka Bean that smells of hay, almonds and vanilla), all of which come together to create an aromatic and green sort-of barbershop vibe that is surprisingly dandy-like for a style of perfumery predominately reserved for the male of the species.  There are of course many variations on this theme with many brands twisting the accord to make floral, leathery, spicy and even feminine Fougères.

For your Fougère education, here you’ll find three of the genre’s most noteworthy examples; the classic, the modern and the contemporary:

It would be almost rude to put together a guide to Fougère and exclude the fragrance that started it all – Houbigant’s Fougère Royale.  Originally created by Paul Parquetway back in 1882 but recently resurrected in 2010 following an extended hiatus, Fougère Royale is undeniably a classic fragrance.  It has the feel of something remarkably elegant for a masculine scent and feels instantly at home when paired with a smart black suit, bow tie and shiny pair of brogues.

Fougère Royale opens with a sharp blast of herbaceous lavender and zesty bergamot.  It’s not an entirely smooth fragrance in the opening, instead opting for sturdy top notes to represent strong masculinity.  There’s a touch of geranium in the heart that tessellates with the lavender, amping up the menthol facets of both flowers and adding a hint of sweet rose before seamlessly transitioning into a gorgeous base of warm hay and moss with glimmers of spicy vanilla.

What’s most remarkable about Fougère Royale is not the fact that it inspired a generation (although that is a rather noteworthy feat) but the fact that even today – 132 years later – it doesn’t smell dated in any way.  OK the revised 2010 version is unlikely to be a spot on recreation of the 1882 original (due to IFRA regulations and the availability of ingredients) but the same themes are there and Fougère Royale smells as dignified ever.  Let’s take this as proof that the Fougère is the most timeless of masculine fragrance styles.

Jean Paul Gaultier’s Le Mâle (1995; Francis Kurkdjian) is as much of a classic fragrance as Fougère Royal is, albeit in an entirely more modern way.  That said, as far as the way both fragrances actually smell, they could not be further apart and the Gaultier presents a ridiculously over-the-top Fougère on steroids.  Smelling the two together really highlights just how outrageous Le Mâleis in comparison to the classic and just how much it would have caused a veritable uproar if it were released back in 1882.

Le Mâle contains all of the required Fougère ingredients, swapping out the oakmoss for mint and vanilla.  It is easily the most barbershop-esque examples of the genre, giving the impression of beautifully buffed and preened male bodies (i.e. where Fougère Royale is a well-groomed hairy chest, Le Mâle is all waxed and tanned pectorals).  But whilst this may be a thoroughly modern scent, the spirit of the Fougère does in fact live on within it thanks to the aromatic and herbaceous zing of the mint balanced with that warm, coumarin vibe found within the vanilla.

Despite the fact that Le Mâle is rather ubiquitous nowadays, it is still an exciting perfume and I often revisit it every now and then to relive my rebellious teenage years.  This Fougère is one that likes to break the rules (all done with a cheeky smile) and where it’s classic counterpart would be better suited to black tie, Le Mâle is entirely more casual.  Pair it with a stripy t-shirt, jeans, converse and go paint the town red!

Amouage specialises in taking familiar themes and turning them on their heads.  Whether it is the festively hectic chypre of Interlude Woman or the unconventional amber of Opus VI, this particular brand knows how to subvert a perfume genre like no other.  It stands to reason then, that their foray into the world of the Fougère, as seen in the wonderful Memoir Man, is less than conventional.

Memoir Man takes a darker view of the Fougère, using notes of mint and absinthe to create a cool, brooding effect that feels introspective.  The usual Fougère components are present of course, there’s a touch of lavender up top to give a slight edge of spice, a dab of coumarin in the heart to make things silky smooth and a nice dose of oakmoss in the base to add the feel of cold earth.

It would be fair to say that Memoir Man is a moody Fougère, but it isn’t sullen by any means.  Perhaps it’s better to define it as a perfume with an atmosphere – one that feels almost as if it is taking its time mulling over the ways of the world.  It’s also less robust and obviously masculine than many Fougères, making for a contemporary experience that really is unique.

Memoir Man is a Fougère reserved for the gentleman that revels in darkness – a night owl who seeks solace in introspection.  Wearing it is a truly beguiliing experience, allowing one to see perfume as something more than just a wearable accessory: a mood, a feeling and a sense of silence.

Having tried all of Amouage scents, this is completely different to any of the others. It boils down to the base notes for me. I actually get an incredibly crisp smell that has hints of cinnamon in it, some people have commented it smells a bit of burnt wood, but I guess it boils down to how it interacts with your skin. I love it and it's very different to any of the other Amouage scents.

This entry was posted on Wednesday, February 12th, 2014 at 9:00 am and is filed under Fragrance, Men, Tried & Tested. You can follow any responses to this entry through the RSS 2.0 feed. You can skip to the end and leave a response. Pinging is currently not allowed.