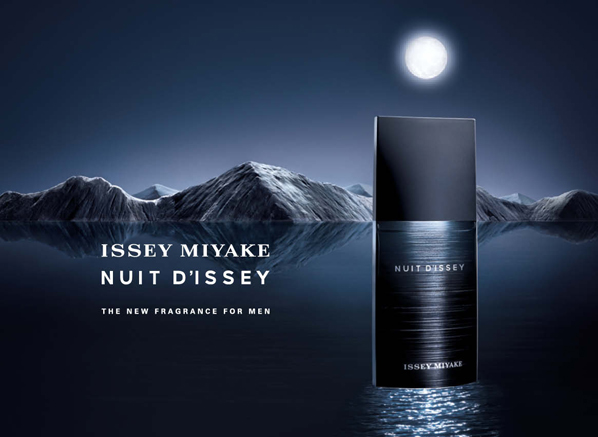 Much in the same way that fragrances such as Dior’s Poison are associated with the 1980s, Issey Miyake’s eponymous fragrances ‘L’Eau d’Issey’ (1992) and ‘L’Eau d’Issey Pour Homme’ (1994) are olfactory time capsules for the 1990s.  The 1990s were an odd decade, for sure.  The outrageous glamour and big structure of 80s clothing was well and truly out, and grunge was in.  The bubblegum pop movement was dead and the ears of the world were tuned to Brit Pop bands such as Oasis and Blur.  The trends for fragrance had changed too – gone were the big and bombastic signatures of Poison, Paris and Opium, and in their place were light, airy and clean fragrances such as CK One.

The 90s was the decade, in which the world repented for the excess of the 80s and Issey Miyake’s first two fragrances are scents that perfectly represent this shift.  They came after the big, smelly orientals and florals, as an abstract sense of cleanliness and purity, in order to wash away the odours that clung to the shoulder and big hair of the decade before.  Both fragrances were met with incredible commercial success and are still popular to this day – 20+ years later.

Of course, along with success comes a slew of flankers and special editions, and the Issey Miyake fragrances are absolutely no exception. L’Eau d’Issey Pour Homme has been flankerised (a new word that I just made up) at least 15 times, the latest of which is Nuit d’Issey, a darker and woodier take on the Issey Miyake masculine created by perfumes Domique Ropion and Loc Dong, and housed within a flacon created by venerable French designer Fabien Baron.

JUMP TO: Win the Nuit d’Issey fragrance in our competition! 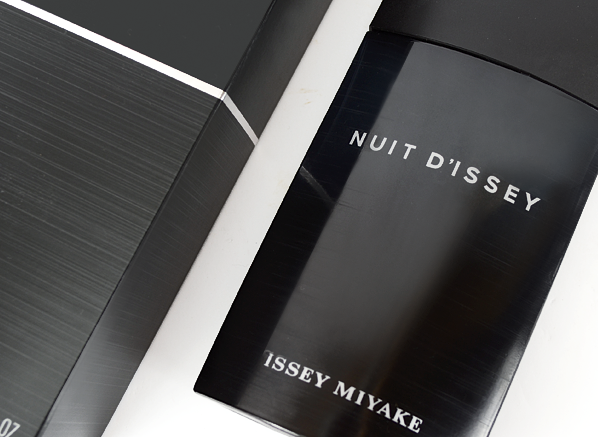 Base: Patchouli, Incense and Tonka Bean

The first thing one will notice when sniffing Nuit d’Issey is that it smells absolutely nothing like the fresh and ozonic signature of L’Eau d’Issey Pour Homme.  In fact, all that the two fragrances share in common is the ‘d’Issey’ in their names, so it is best to treat Nuit d’Issey as its own fragrance entirely.  Nuit d’Issey is described as a “sharp, crisp and mysterious ode to wood” and mystery aside that is pretty much what one gets with this fragrance – zesty and astringent woods.

In the opening stages, Nuit d’Issey is tart and crisp with a grapefruit accord that manages to capture the sourness of the fruit but none of the acidity of acerbic bitterness.  Bergamot adds sweetness and tempers the grapefruit, bringing lemon facets in to play – nuances that add familiarity to the accord.  Underneath this wave of citrus, there appears to be a dry, herbaceous quality that adds darker influences and inflections to the overtly bright and sparkling feel of the bergamot and grapefruit.

The citrus is underpinned by weighty woods and leather.  Both materials feel dry and dusty, evoking the image of cracked leather and broken wood.  There’s harshness to the heart of Nuit d’Issey that is undeniably masculine, and it gives the impression of jagged edges – a ruggedness that is quite out of character when compared to Miyake’s penchant for minimalism and purity.  This fragrance isn’t a clean shaven dude in a white shirt, it’s the sexy, stubbly gent in his best leather jacket.

As Nuit d’Issey dries down, those jagged edges and rugged lines become rounded and smooth thanks to the delicate use of tonka bean.  Here, the note simply adds texture without any of the vanilla or hay-like facets usually associated with tonka.  Patchouli brings fuzziness and as the fragrance heads towards the deepest and darkest depths of its dry down, vetiver, in a dry and almost burned guise, peeks gently through.

Nuit d’Issey probably won’t win any awards for ingenuity, after all there are many woody citrus fragrances out there for men, some of which are ultimately more interesting.  That said, it is an easy and enjoyable fragrance to wear.  Nuit d’Issey is also very well composed and has a number of nuances – the burned vetiver, the cracked leather and the vanilla-less tonka – that bring surprising little twists.  If you’re a fan of L’Eau d’Issey Pour Homme, you may find Nuit d’Issey as a stark contrast, and as I’m sure Miyake intended, both fragrances are as different as day and night.

Congratulations to our winners Laura, Tim and Sw1ayfe!

To enter, simply comment below and tell us – do you prefer fresher or more sensuous fragrances for men? The competition closes on Wednesday 24th September. Good luck!

This entry was posted on Wednesday, September 17th, 2014 at 12:59 pm and is filed under Candy Perfume Boy, Competitions, Fragrance, Men. You can follow any responses to this entry through the RSS 2.0 feed. You can skip to the end and leave a response. Pinging is currently not allowed.

@escentual Kick off the Christmas party season with great hair and makeup! Choose your Christmas party look with the help of u… https://t.co/wDbqQGyKbL
1 day, 6 hours ago • reply • retweet • favourite

@escentual How are you going to wear your hair for the Christmas party season?🥳
1 day, 8 hours ago • reply • retweet • favourite

@escentual Do you ever wear a particular perfume because it makes you feel a certain way? We certainly do! And we thought we'd… https://t.co/nnkFkKFwpp
6 days, 16 hours ago • reply • retweet • favourite