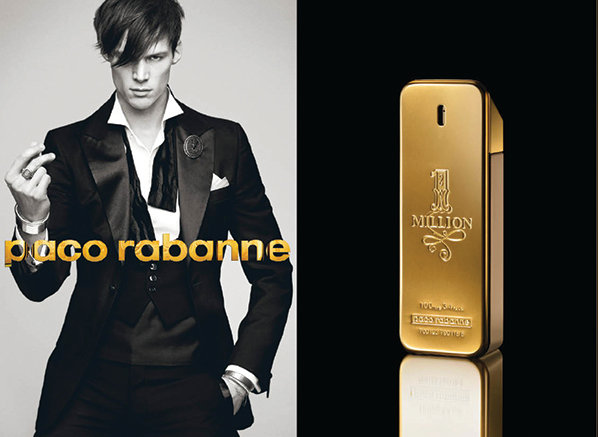 Paco Rabanne 1 Million always strikes me as an incredibly well thought out perfume, right from the juice itself, to the packaging and advertising.  In his book, Perfumes The A-Z Guide, Perfume Guru, Luca Turin repeatedly uses the phrase “top down design” to denote a fragrance that displays complete synergy and cohesion between all of its disparate elements, i.e. the fragrance, the bottle, the name and the advertising.  1 Million is one such fragrance and the fact that it is such a huge success is not just down to the fact that it’s a decent, easy-to-wear fragrance, or that it comes in a jazzy bottle, or even that its aesthetic is all about striving to be the most successful one can be – it’s down to all of these things.

Historically, the house of Paco Rabanne is known for a mixture of classic fragrances such as Paco Rabanne Pour Homme (Jean Martel; 1973) and XS Pour Homme (Gérard Anthony & Rosendo Mateu; 1993), as well as a crop of intriguing and unusual blends like Calandre (Michael Hy; 1969) and Métal (Robert Gonnon; 1979).  1 Million, which was created in 2008 by Michel Girard, Olivier Pescheux and Christophe Raynaud, sits somewhere in the middle between familiarity and ingenuity, boasting an olfactory signature that is inspired by gold, luxury and masculine confidence.

“1 Million is the expression of every man’s fantasies. A taste for money, sparkling cars, games and pretty girls. An addictive fresh spicy leather fragrance, it embodies the return of flamboyant masculinity. The 1 Million man is a seducer. He is flamboyant, self-confident, daring and irresistible…”

Base: Amber and Leather

1 Million’s opening accord has the olfactory dials set to dazzle.  It opens golden and sparkling with shimmering grapefruit and zesty orange.  There’s a pleasing tension between the bitterness and sweetness of these fruits that gives 1 Million the golden sheen one would expect from a fragrance that it essentially supposed to represent the idea of Au, bottled.  There’s also a touch of mint lurking beneath the brightness of the citrus.  This brings a slightly mentholated effect that is akin to the idea of bright light, and further extends the idea of dazzling gold.

Interestingly, 1 Million quickly becomes a warm and spicy fragrance as it develops, creating a stark contrast to the positively zesty nature of the opening.  The core of the fragrance is a delicious heart of spicy apple pie, accented by dark chocolate and cinnamon, to create a gourmand element that is both warm and comforting.  On top of this, the clove-like nuances of a rich rose note really do a lot to make the food-y aspect of 1 Million deeply enticing, multi-faceted and easy to enjoy.

The base is warmer still and sees the spice of cedar wood, the meaty sweetness of leather, and the plush velvety quality of vanilla.  Together, these three notes create a bold base that is one half spicy pastry and the other half, old-school masculine.  The golden effect has pretty much dissipated by the time 1 Million reaches its base, making for something that is decidedly more auburn in feel, and quite in tune with the colours, and smells of autumn.

1 Million is an attention-grabbing scent that says, “look at me” but at the same time, it doesn’t draw the eye, or more accurately, the nose, by being odd, unique or challenging, instead it simply smells good in a loud and diffusive way.  Much like the gold bars, from which it is inspired, this is a glitzy, glam scent that is impossible not to notice.  On 25 December, pop this in the stocking of the guy you know who likes to be centre of attention (and let’s face it, who doesn’t), and you’ll most definitely be keeping yourself off of the naughty list for next Christmas.

This entry was posted on Tuesday, December 2nd, 2014 at 8:00 am and is filed under Candy Perfume Boy, Fragrance, Guest bloggers. You can follow any responses to this entry through the RSS 2.0 feed. You can skip to the end and leave a response. Pinging is currently not allowed.