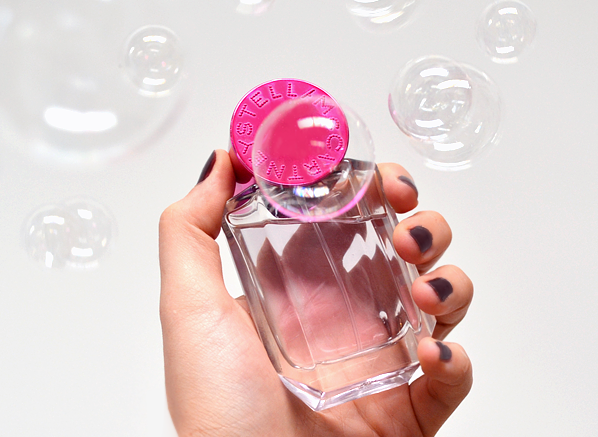 I was sold on Stella McCartney POP the minute I saw the ad campaign, which stars none other than Lourdes Leon, the daughter of Madonna (no introduction needed) and other cool youths such as super-cool music star-on-the-rise Grimes, who also provides the soundtrack.  The girls drive around in their pink convertible, which I should also mention appears to be some sort of mobile hot tub.  The whole thing is effortlessly cool and presents a younger, more millennial side to Stella McCartney’s aesthetic.  So yes, with all this fabulousness in the visuals you can consider me hooked and we haven’t even got to the fragrance yet…

POP is described as a “fun loving” perfume for “a woman who lives to throw caution to the wind” and unlike so many fragrances, it lives up to its inspirations, easily being one of the most outrageously fun perfumes to have passed my nose in a while.  In fact, I’m happy to report that I actually giggled when I first tried it!  Perfume can make us feel so many emotions; love, lust, sadness and happiness, but it’s not often that one actually has the ability to make one laugh.  POP is so much fun that it’s easy to get addicted to it and to borrow a well-known slogan from a certain brand of potato-based snacks, I proclaim that with Stella’s latest fragrance, it’s definitely a case of ‘once you POP, you just can’t stop’. 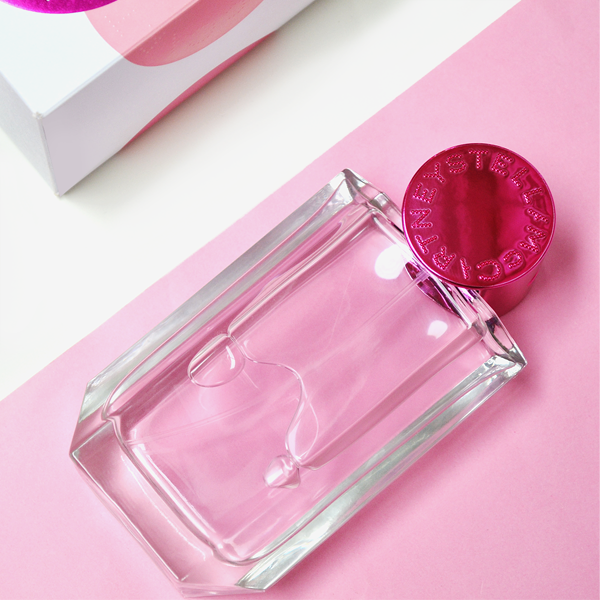 Base: Sandalwood, Cedar and Musk

Well, to start with Stella McCartney POP smells like watermelon-flavoured bubblegum.  That’s right, you heard me – watermelon bubblegum.  It’s sweet, aqueous and dewy, but also vibrantly coloured in hues of neon green and shocking pink.  This is exactly what made me chuckle the first time I gave POP a curious sniff.  The pure pop art colours and novelty of the fruity bubblegum is so joyful its impossible not to feel both thrilled and amused but the sheer, unabashed novelty of it.  What’s more, there’s a quality to this vivid accord that elevates it to being more than something that is ditzy or silly, instead it feels decidedly empowered and unashamed.

Thankfully the fun continues into the heart of the fragrance, which is an ode to big white flowers with a tropical vibe.  The syrupy sweetness of tuberose clashes with the milky, peach-like quality of frangipani to create an intense rush of heady floralcy.  The flowers have a plastic-like sheen to them that allows POP to flirt with the natural and the synthetic.  On the one hand, the fragrance is rooted in nature, boasting a heady rush of white floral creaminess, whilst on the other it presents a plastic quality that is evocative of Barbie dolls and blow-up pool toys.  It’s this clash of the natural and the lab-created that makes POP so exciting to wear.

As it dries down, POP relies heavily on musks and woods, with just a hint of vanilla sweetness.  It becomes decidedly more transparent with time, moving from full bubblegum pink in the opening to something more sheer and iridescent in the base.  There’s an aquatic vibe throughout that feels like a glistening body of water in a swimming pool, the kind where the water is magnified by the intensely bright colour of the pool itself and POP manages to carry through its juicy, watermelon florals all the way to the end.

Stella McCartney POP is a whole heap of fun.  Like a literal ton of fragrant fun.  It’s delicious and dizzy, vibrant and wonderfully technicolor.  Despite all this joy, it’s not a folly of a fragrance and there is some seriously interesting stuff going on under the hood as it were.  Initially, I thought that it was perhaps a bit too sheer and transparent at times, but repeated wears have shown me that it’s this lightness of hand that makes POP work so well.  Never once does it feel heavy and it presents, rather unusually, a fruity, gourmand floral that has an aquatic edge to it.  To sum up, I’d say that wearing POP is just like driving around in a pink convertible that’s also doubles up as a hot tub – it’s a bit bonkers but it’s also fierce af at the same time.  Did I mention that I’m hooked?

This entry was posted on Wednesday, July 20th, 2016 at 4:48 pm and is filed under Candy Perfume Boy, Fragrance. You can follow any responses to this entry through the RSS 2.0 feed. You can skip to the end and leave a response. Pinging is currently not allowed.

@escentual Do you ever wear a particular perfume because it makes you feel a certain way? We certainly do! And we thought we'd… https://t.co/nnkFkKFwpp
4 days, 22 hours ago • reply • retweet • favourite

@escentual @Jack95862637 Thank you for reaching out. We are so sorry to hear you are experiencing problems with your order. Pl… https://t.co/kqOwj8mVDc
5 days, 21 hours ago • reply • retweet • favourite

@escentual A simple yet effective hydrating skincare routine for men, check! Have you ever heard of Lab Series? 🧴… https://t.co/A02ixAkXhK
6 days, 12 hours ago • reply • retweet • favourite