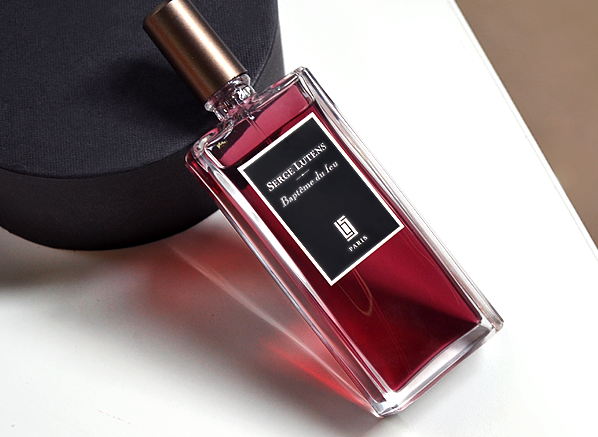 Only Serge Lutens would have the cheek to call a fragrance ‘Bapteme du Feu’ (Baptism of/by Fire).  We shouldn’t be surprised though, it does come from the man who has named fragrances after nuns, orphans and cling film, just to mention a few of his unconventional inspirations.  With Serge Lutens one always expects the unexpected and is presented with something that is unconventional yet wearable.  He is the cheeky uncle of the fragrance industry and he never fails to challenge one’s notions of what perfumery can and should be.  With his latest fragrance he proves that his mischievous sparkle is still burning with full intensity.

Bapteme du Feu takes its inspiration from combat, boasting a blood red juice that evokes the image of fire, plasma and angry skies.  Serge says that it “walks the line between good and evil”, which leads one to think that this fragrance is certainly going to divide opinion, like so many of his do.  The real inspiration comes from M. Lutens’ childhood (which often serves as a cue for many of his olfactory endeavours – his fragrances are the therapist’s couch and our noses the counsellor), specifically time spent at fun fairs and shooting ranges.  It’s a perfume with a surprising core of gingerbread that flirts with the idea of something edible, but doesn’t quite deliver the goods.  It teases.  Have I got you suitably intrigued yet?  I thought so! 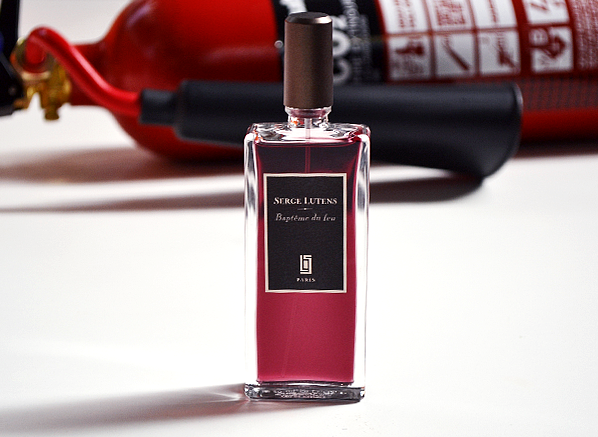 At first sniff, Bapteme du Feu is pretty weird.  Initially, it’s very juicy with a heavy dose of orange up top, quickly though, the promised ‘feu’ takes hold.  A hot blast of cinnamon flares up giving the impression of an exotic spiced tea filled with candied fruit, cloves and warm cinnamon spice.  Weirdly, this gourmand impression doesn’t feel particularly edible, instead one gets the sense that they are viewing a painting of a spiced drink, rather than sniffing the concoction itself.  This abstraction makes for an experience that feels distant and aloof, despite the warmth of the fragrance.

Underneath that golden bath of spiced orange lies a floral heart that is rich in rose and immortelle.  Both these materials extend the spiced warmth further, moving away from citrus fruits studded with cloves to something more full bodied.  Rose gives the composition a soup-like dash of sugar and pepper whilst the immortelle really amps up the texture, forming a solid underpinning of curry-spiced gingerbread.  It’s safe to say that, at this point Bapteme du Feu does go a bit gourmand – but only just a bit.

Weirdly, and there’s quite a lot that’s weird about this fragrance if we’re being frank, that edible impression doesn’t last into the base.  As it dries down, Baptême du Feu becomes dark and animalic, blending heavy wood ingredients – notes that they are very much inflected with the shower of spice that adorns the entire fragrance – with a fuzzy, but dirty dose of castoerum.  Now, if you’re not familiar with castoreum, I shall tell you that it’s an ingredient extracted from the rear end of beavers.  Yup, it’s beaver butt and it smells glorious & filthy.  Of course, nowadays the material is synthetic or is achieved through blending a number of materials together to create a similar effect, which if you’re an animal lover like me, will be very good news.  In Baptême du Feu this animalic vibe simply allows the scent to finish on a skin-like bed of crunchy biscuit and animal fur.  I told you it was weird!

Bapteme du Feu is yet another mystifying novelty from the house of Lutens.  Like much of Serge’s work, it doesn’t fully reveal itself and each wear brings something entirely new.  I admire how it flirts with the gourmand but doesn’t quite get into ‘eat me’ territory and even if it does, the impression quickly takes a sharp right turn to something unexpected.  I imagine that Baptême du Feu would be the perfect autumnal scent because it’s warm and comforting, but it’s also entertaining, complex and unusual enough to entertain as the days grow long.  I see it as a night at the theatre wrapped in a gigantic fur scarf.  It may not be a baptism of fire, but it certainly is a toasty evening spent next to one.

What do you think of Bapteme du Feu? What’s your favourite Serge Lutens fragrance? Comment below and tell me all about it!

This fragrance plays with contrasts. It changes between brigt and dark, light and shadow, fresh and warm. The fresh, balmy pine notes becomes sweet. Later, when incense and spices take their part, becomes smoky and difuse. The deep lush green develops into a impenetrable and dense black forest plenty of sheer sensuality.

This entry was posted on Wednesday, September 7th, 2016 at 11:16 am and is filed under Candy Perfume Boy, Fragrance, Tried & Tested. You can follow any responses to this entry through the RSS 2.0 feed. You can skip to the end and leave a response. Pinging is currently not allowed.

@escentual Tinted moisturisers - are you a fan? Along with providing a subtle hint of coverage, today’s tinted moisturisers… https://t.co/RyXDYQ2p5w
7 hours ago • reply • retweet • favourite

@escentual @andrex086517971 @bareMineralsUK Hey Lisa! Thank you so much, of course, it's the shade Honesty in the bareMinerals… https://t.co/0WBxc9ZVgy
11 hours, 28 minutes ago • reply • retweet • favourite

@escentual Our #EscentualScents Floral Discovery Set is the perfect #MothersDay gift! Buy a box for her, and one for you, and… https://t.co/L8B4O13T0B
1 day, 2 hours ago • reply • retweet • favourite