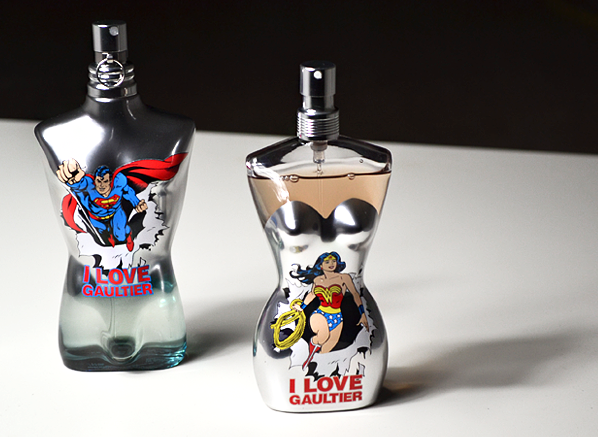 In terms of perfume power couples there is no pairing more iconic than Jean Paul Gaultier’s Classique and Le Mâle.  They’ve lasted longer than any Hollywood couple and between them they present sensuality, humour, naughtiness and fun all in niftily scented little packages.  They are two of perfumery’s great legends, staying as relevant today as they were 20+ years ago when they launched. To celebrate their longevity, this summer, Le Mâle and Classique have joined forces with another iconic pairing: Superman and Wonder Woman.

Not content with being heroes of the perfume world, Jean Paul Gaultier’s masculine and feminine flagships have stripped off their civilian clothes and swapped their respective stripes and forest straps for capes and strategically-placed undergarments.  It’s not just the bottles that have changed either, the scents have had a graphic overhaul too, with the original scents lightened and twisted for summer in two fun and fascinating Eau Fraiche interpretations that are as action-packed as a comic book.

Is it a bird, is it a plane? No, it’s an Eau Fraiche version of Le Mâle! What would Superman smell like, I wonder?  Newspapers and Spandex, perhaps?  Well, according to the mischievous Jean Paul Gaultier the answer to that burning question is mint and fabric softener.  That’s right, Mr Superman smells so fresh, so clean. In this fresher take on Gaultier’s legendary Le Mâle, the original’s barbershop fougère accord has been shoved in the freezer for a couple of hours to create something bold and refreshing.

Le Mâle Eau Fraiche opens up with a blast of mint that really is like sticking your head in a bucket of ice cold water – it’s really that refreshing.  Then comes the fabric softener note which is astoundingly realistic (and humorous enough to bring a smile to one’s face).  Together with the mint it creates an impression that is like steamed and starched sailor’s suit fresh from the dryer.  Underneath this freshly-washed cleanliness is a warm base of sandalwood and vanilla that provides a little bit of Le Mâle’s cheeky sensuality.  Le Mâle the Superman may not be as naughty as Le Mâle the sailor, but he vows to save the world through freshness, cleanliness and with a good smelling attitude.

On a note completely unrelated to this post or anything within, I am super excited about the new Wonder Woman movie that comes out later this year.  it looks epic!  Speaking of epic things, JPG’s Classique is pretty legendary as far as fragrances go and it’s been given the remake treatment, much like Wonder Woman the movie, for the Eau Fraiche edition.  This version of Classique takes the original from powdery boudoir opulence to sugary cocktail deliciousness, and it smells as kick ass as Wonder Woman is.

Classique Eau Fraiche starts out like a freshly squeezed citrus cocktail.  Candied orange and lemon is stirred into a generous helping of sugar syrup to create an incredibly drinkable and juicy scent.  Remarkably, the whole thing feels rather light and airy, treading carefully away from sickly sweet territory.  This is due to the contrast of labdanum, which adds a bitter edge, whilst vanilla adds a delicate warmth underneath.  Whilst Le Mâle Eau Fraiche is busy doing his laundry and brushing his teeth, Classique is at the bar getting in a few drinks before she hits the town to defeat some bad guys.  They’re quite the pair, I must say!

This entry was posted on Wednesday, March 29th, 2017 at 12:22 pm and is filed under Candy Perfume Boy, Fragrance. You can follow any responses to this entry through the RSS 2.0 feed. You can skip to the end and leave a response. Pinging is currently not allowed.