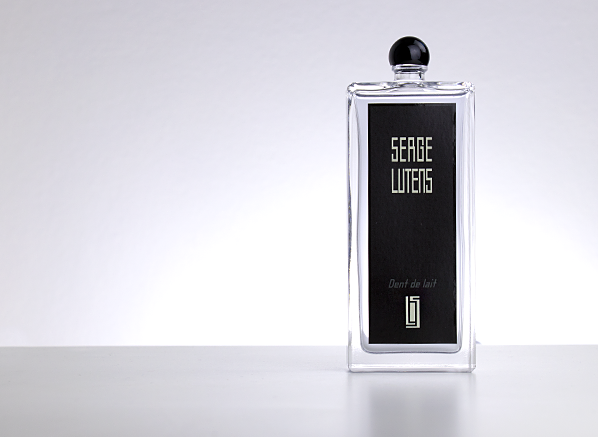 Things are never simple in the world of Serge Lutens. Unlike many other brands, Lutens doesn’t reel off a list of notes and graphic descriptions of his scents, no, in his world that would be superfluous and tacky. Instead, Serge Lutens speaks in riddles, in limericks, and unusual names (and often cheeky ones too) never giving everything away. He wants us to smell for ourselves and explore his olfactory exploits with just a mere hint of guidance. To experience a Lutens fragrance is to step into the unknown – we are not wearers of his perfumes, we are explorers sent on an olfactory odyssey and a secret quest to unlock the secrets of Serge.

“Now weary of the tongue’s games which have for weeks on end been loosening its tooth, a young wolf is anxious to move from milk to blood.”

His latest perfume ‘Dent de Lait’ (Milk Teeth) is no exception. It comes with a description that features loose teeth, milk, blood and even a young wolf. None of that tells you much about the fragrance, except it does drop a few clues, hinting at two strong olfactory themes explored by this childhood-inspired fragrance: milk and metal. These two things may sound as if they don’t go together at all, but Lutens is the king of pulling together facets that are strongly opposing, and in Dent de Lait he creates a sense of tension that is truly fascinating. So let’s let that fascination unfold as we head into sniffing the fragrance. 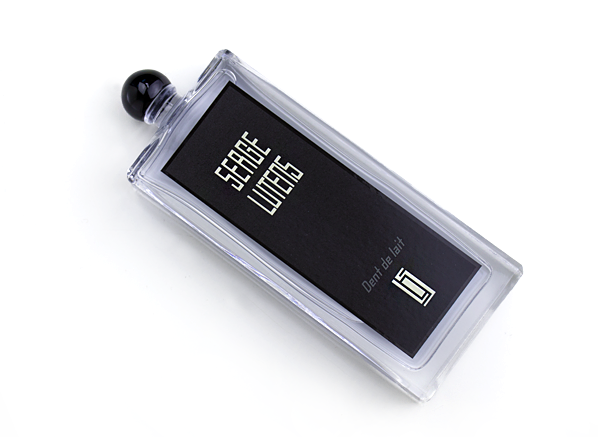 Dent de Lait opens with a plethora of intrigue.  I’d be tempted to call it a ‘cacophony’, but whilst it displays a complex mix of olfactory sound, it’s actually not a loud fragrance at all.  In fact, it feels strangely calm. The top notes present a wave that is tangy, fruity and sharp. The fruit feels rich and purple, with a juicy, almost-stewed vibe, whilst a gauzy metallic accord cuts through any sweetness. There’s also a hint of a menthol character that feels almost like wintergreen, presenting the tang of menthol without the fullness of something like mint. As Dent de Lait tentatively takes its first bite it most definitely leaves a lasting impression.

The heart is distinctly floral and smelling it, I definitely get shades of Lutens’ other florals. I always think that the flowers he creates are deadly blooms – those that are likely to sit in some mad botanist’s garden somewhere. His flowers are like ghostly spectres of iris, jasmine black mambas ready to pounce, and Cruella de Vil behind the wheel with a maniacal look in her eyes wearing a heady spritz of tuberose. I see hints of these in Dent de Lait, specifically in the form of a sweet jasmine note, but the overall impression is softer and more innocent. This is Lutens’ cuddly side – his innocence, shown vulnerably in the guise of a fluffy white flower.

Dent de Lait’s main theme is the clash of the metallic and the milky.  We’ve seen a similar essay in Etat Libre d’Orange’s Sécrétions Magnifiques, but the treatment here is less horrific and more intimate (although the Etat Libre d’Orange gets pretty intimate with its magnificent bodily fluids, let’s be real).  This clash of polar opposites creates a fabric-like feel, almost as if soft cashmere is pulled against a rough hessian.  To my nose, it smells like a liquid metal in the purest shade of white. It cannot be placed in nature because it smells entirely new.

Like many of Serge Lutens’ fragrances, Dent de Lait is hard to pin down.  It showcases elements of familiarity but there’s something really undefined about it and I’ll admit that I often found it difficult to choose the right words to describe how it smells.  So I think Dent de Lait will be one of those divisive fragrances that people either love or hate – it may be too weird for some, but others may love it for its unusual beauty.  What it can’t be accused of is being boring and as we know, Uncle Serge is never dull.  He’s sometimes pretentious and always mysterious, but he is never, ever without interest.  My advice?  Sink your teeth into Dent de Lait and see what you think.

This entry was posted on Wednesday, November 8th, 2017 at 1:32 pm and is filed under Candy Perfume Boy, Fragrance, New products, Spotlight On, Tried & Tested. You can follow any responses to this entry through the RSS 2.0 feed. You can skip to the end and leave a response. Pinging is currently not allowed.