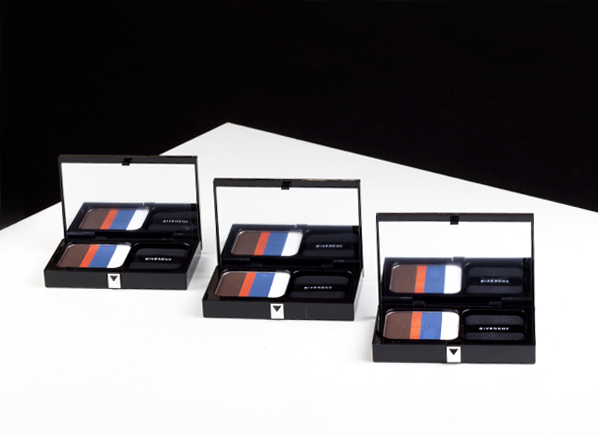 GIVENCHY is couture in every sense of the word. Ever since it was founded in the early 1950s, the atelier has pushed boundaries by dressing women in masculine silhouettes that were designed to liberate and empower – it was the beginning of power dressing as we know it today. And the origins of the GIVENCHY house still stand, expanding from fashion into beauty with an offering of statement luxury makeup that gives women the power to express their creativity.

This idea of creativity goes hand in hand with one of GIVENCHY’s latest launches: the GIVENCHY Couture Atelier Palette. A part of their Couture Outlines Spring 2018 collection, the range pays homage to the brand’s origins by taking us back to a couture studio. Scroll to see this masterpiece swatched and on the eyes… 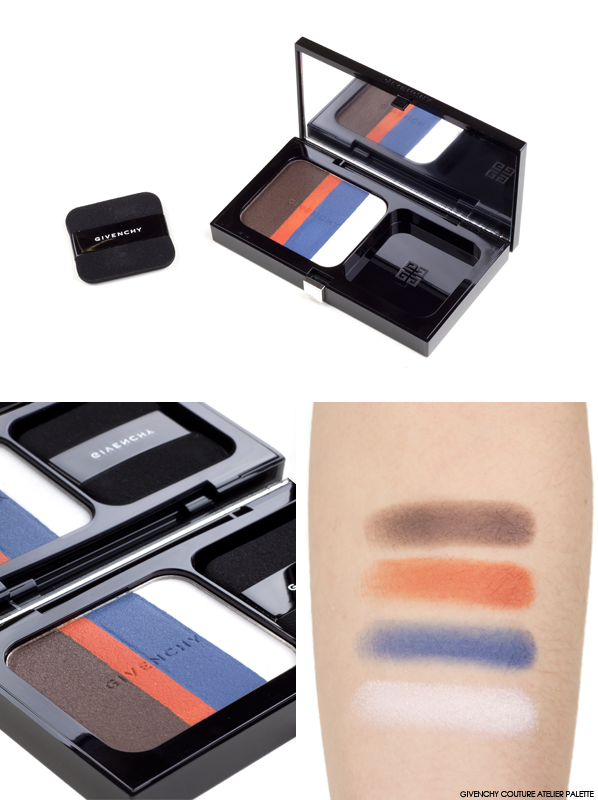 As I mentioned above the GIVENCHY Couture Atelier Palette is inspired by GIVENCHY’s couture studio, however, the inspiration goes far beyond that. For this palette, Nicolas Degennes has been inspired by stockman mannequins.

“I went back to the roots of couture: the atelier is where the fashion designer explores, creates and lets the imagination run free. I got inspired by the stockmans used by the seamstresses.”

The limited edition graphic palette features four matte eyeshadows that can be used on the eyes and brows – talk about creative freedom! The rich, deep brown symbolises the wood of the stockman and acts as the perfect shade for structuring both the eye and brow, the orangey-red and navy blue recalls the designer tape used in the studios, while the white is an ode to the cotton canvas that covers the bust. And it’s not just the shadows that give a nod to a couture studio either, the square applicator is typical of the chalk used by designers to sketch designs onto patterns.

Each eyeshadow in the Couture Atelier Palette has the same very matte texture, which is super soft and easy to blend. The formula contains a mixture of silicones and 3D polymers, which create a creamy, long-lasting result. As you can see from the swatch above they offer immediate coverage thanks to a high percentage of pigments, and for an even deeper colour payoff, you can apply them with a wet brush. 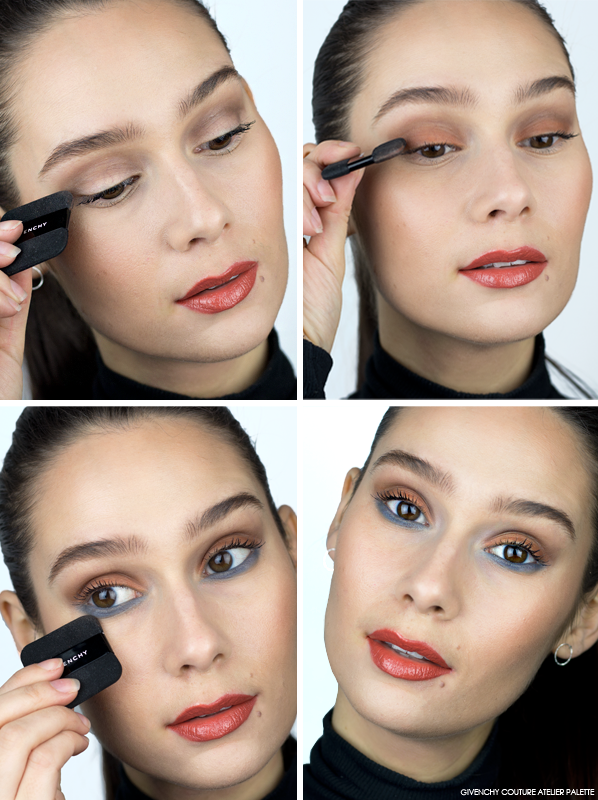 The possibilities are endless with this palette; you could create a mod-style look or create a canvas colour with any one of the statement colours. But despite the palette’s vivid selection of shades you can also create really wearable looks, which is what I chose to do above. A medley of all four eyeshadows, the look above is extremely simple and frames the eyes beautifully. Here’s how I created it…

Step 1: Firstly apply the dark brown through the crease and blend upward with a fluffy brush to add definition to the eyes.

Step 2: Next, glide the orange-red shade all over the lid, blending it upward with the brown shade that’s running through the crease.

Step 3: To frame the eyes apply the navy blue shade underneath the eyes from inner corner to outer corner and blend until the edges are blurred.

Step 4: As a finishing touch apply the white shadow to the inner corner of the eyes to make them pop.

This entry was posted on Thursday, January 18th, 2018 at 9:58 am and is filed under Ceryn Lawless, Make-up, New products, Spotlight On, Swatches. You can follow any responses to this entry through the RSS 2.0 feed. You can skip to the end and leave a response. Pinging is currently not allowed.

@escentual Do you ever wear a particular perfume because it makes you feel a certain way? We certainly do! And we thought we'd… https://t.co/nnkFkKFwpp
1 day, 4 hours ago • reply • retweet • favourite

@escentual @Jack95862637 Thank you for reaching out. We are so sorry to hear you are experiencing problems with your order. Pl… https://t.co/kqOwj8mVDc
2 days, 2 hours ago • reply • retweet • favourite

@escentual A simple yet effective hydrating skincare routine for men, check! Have you ever heard of Lab Series? 🧴… https://t.co/A02ixAkXhK
2 days, 18 hours ago • reply • retweet • favourite

@escentual Did you know that one of @TOMFORD's all-time favourite fragrance notes is patchouli? That's why you'll find it at t… https://t.co/qPwI5ITl9C
6 days, 4 hours ago • reply • retweet • favourite