How to Scent Halloween: The Best Dark Fragrances 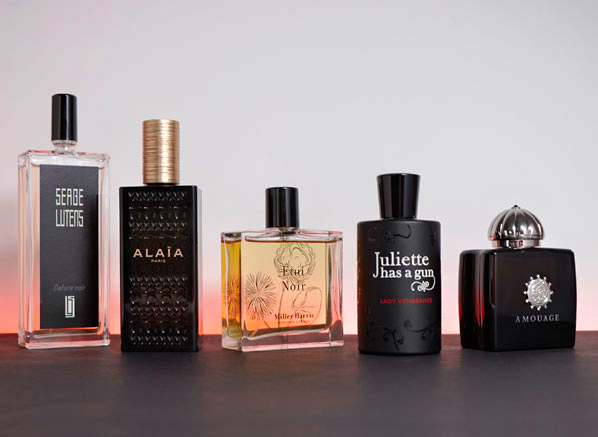 Halloween is a holiday that has a lot more to it than trick or treating and apple bobbing. It has a history and origins that have far more spiritual connotations than fancy costumes may lead us to think. It’s often thought that it originates from the Gaelic festival of Samhain – a celebration that marked the beginning of winter or the darkest half of the year, during which it was believed that the spirits of the dead were abroad. It represents something much darker than we know today.

To celebrate Halloween or Samhain, this year, we are celebrating a group of fragrances that are evocative of that darker half – perfumes that smell beautiful and are undeniably wearable, but have something dangerous about them, or perhaps possess an element of evil. In this list, you will find perfumed poisons galore and fragrances as dark as the night, or perhaps even darker. Each one is beautiful, some are deadly, and all should be approached with caution.

Don’t say I didn’t warn you… 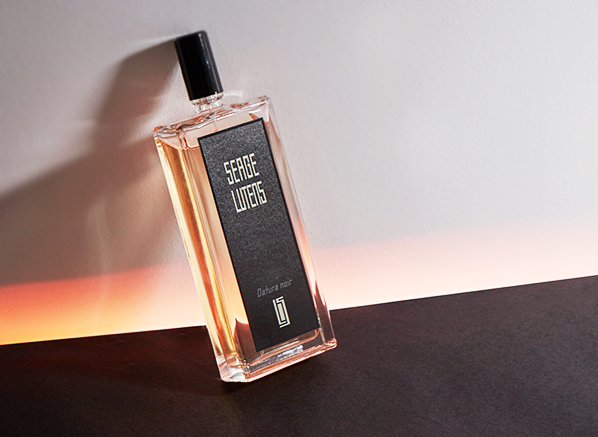 Datura, or ‘Devil’s Trumpet’, is a poisonous night blooming flower – a sweet smelling bloom that can cause a sense of delirium in those who ingest it, or, if one is unlucky, side effects can also include fatigue, confusion, and….death. To be ensnared by the datura is to give in to temptation, knowing fully that the pleasure of its flesh, may just be the very last thing one experiences before succumbing to a delirious death.

If anyone knows how to tame a fatal flower, it’s the enigmatic Serge Lutens.  He has captured as specimens, the deadliest of nature’s blooms, taking flowers like tuberose and twisting them into maniacal blends that delight (and sometimes frighten) the wearer. For Datura Noir he has emphasised the attractive aspects of Devil’s Trumpet, in a hazy, hallucinogenic blur of cherry and white flowers. It is a sweet, honeyed floral with the bitterness of almond and pastel blur of heliotrope – together, this gives one the sense of a beautiful substance that screams ‘eat me’ but leaves one with a sense of uneasiness the moment it hits the tongue. Approach with caution. 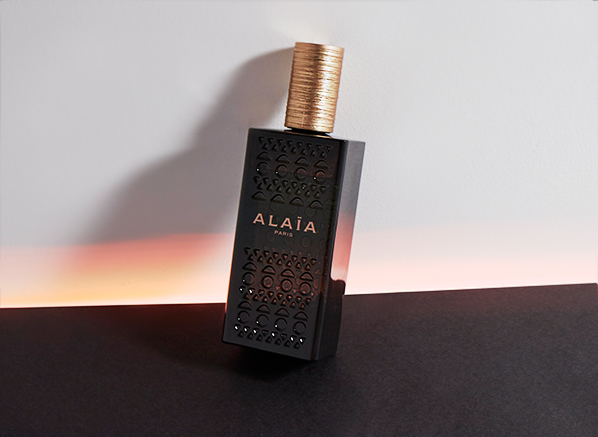 As Cold as Stone

I have always had a morbid fascination with churches – big gothic buildings of a past age.  There is something about the stone in these holy places. It feels cold, almost as if all of the history it has seen and stored in its muscle memory had turned it to ice. If one places their ear against the cold walls of a church, the stone whispers in a cool, airy tone. But what does it say?

For the scent of cold stone, none are more dramatic and icy than ALAÏA Paris by ALAÏA. This is the fragrance of white and black – where white flowers (an abstract, heavenly bouquet) are coated in grey incense smoke and ice water from a black lake. ALAÏA Paris is an unforgiving fragrance – a witches broth that speaks in incantations and never for one moment lets people forget that you, the wearer, are their Supreme. 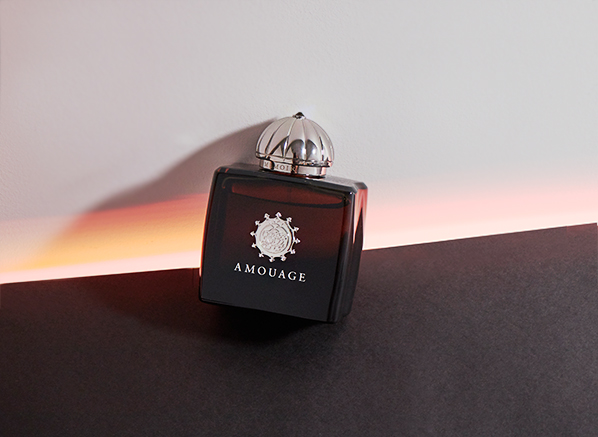 The Light and Darkness in all of us

Darren Aronofsky’s Black Swan is a movie about the duality of personality and how, in all of us, lies a darkness that has the ability to sabotage those around us, but also ourselves. Natalie Portman gives an Oscar-winning performance as Nina, a ballet dancer who is suddenly thrown into the role of a prima ballerina in her company’s production of Swan Lake. Whilst Nina is perfect for the role of the white swan, she faces rivalry in the form of Lily, who personifies the black swan. As time progresses, Nina’s dark side emerges…

Memoir Woman by Amouage is a symphonic fragrance that represents the duality of the human soul – the light and the darkness. It crosses the divide between two of the boldest perfume genres: the oriental and the chypre. Memoir Woman’s lightness is shown through graceful movements of mandarin, pink pepper, white flowers and rose. Its darkness comes in savage bites of absinthe – an unending bitterness – and a rich, animalic base of leather, moss, and castoreum. Like Nina, as black swan and white swan, Memoir Woman loses itself, creating an identity that is as malevolent as it is benign and as fascinating as both. 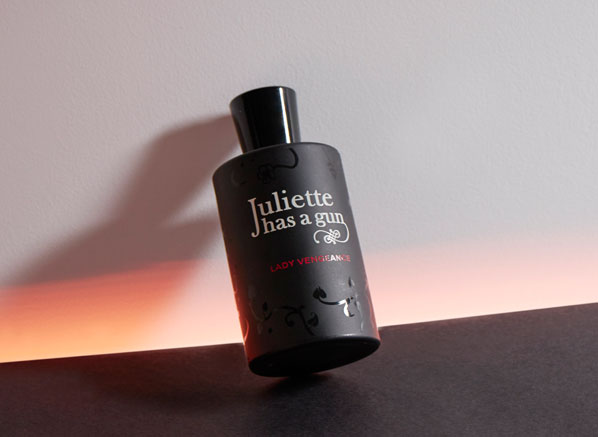 Hell hath no fury like a woman scorned and there is no flower more furious than the rose.  Decked out in femme fatale red, with petals the texture of velvet, the rose may look appealing, beautiful even, but to touch such beauty comes with a price, and the toll one must pay is in the currency of blood – drops of which are taken by the rose’s spiny thorns as a reminder to look, but not reach out.  Beautiful but deadly, that’s the spirit of the rose.

Lady Vengeance, the iconic debut fragrance from Juliette Has a Gun is perhaps the most scorned rose out there.  Created by legendary perfumer Francis Kurkdjian, Lady Vengeance presents a ruby red rose awash with tart, juicy berries.  This is how she lures you in – with her soft, powdery presence and her luminous, fruity, rosey beauty. Her texture Is plush and silky – a caress that reveals nothing of the damage she could do.  But underneath lies darkness – an ink black well of patchouli that bubbles up just when the time is right – when it’s time to remind the world just how furious the rose can be. 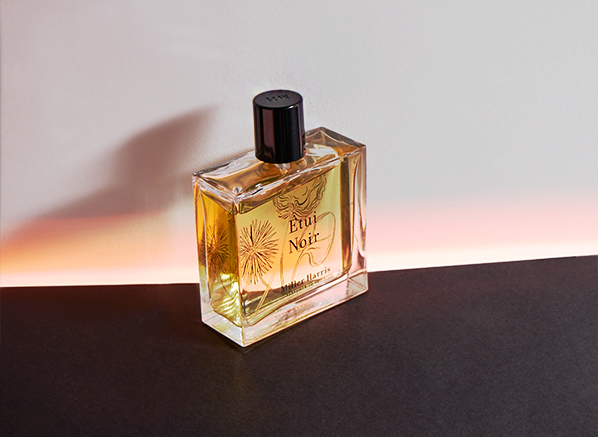 At its darkest, the colour black becomes light-absorbent.  There is a particular shade called ‘Black 2.0.’ that is so black it flattens all three-dimensional feature of an object to black, rendering it completely flat.  You can even shine a red light on to the surface of Black 2.0. and it magically disappears – sinking into the abyss of black and the absence of colour.

Black, or ‘noir’, is a familiar theme in fragrance but very few perfumes live up to this name and depth of darkness. To my nose, the darkest perfume material is leather – it absorbs the olfactory light around it. Etui Noir by Miller Harris is one such fragrance and for this sunny, effervescent brand, Etui Noir is an uncharacteristically noir fragrance. It smells like an old, cracked leather jacket, the type James Dean would have worn in movies like A Rebel Without a Cause – it’s dangerous, reckless, and moody, but like all the dark things in life, undeniably attractive.

This entry was posted on Wednesday, October 24th, 2018 at 5:38 pm and is filed under Candy Perfume Boy, Fragrance, Halloween, Tried & Tested. You can follow any responses to this entry through the RSS 2.0 feed. You can skip to the end and leave a response. Pinging is currently not allowed.

@escentual This #TextureTuesday is all about cleansed skin! Which one of these new #skincare launches do you want to try most?… https://t.co/eLRRYehNNQ
7 hours, 40 minutes ago • reply • retweet • favourite

@escentual National Menopause Day | Did you know 13 million women in the UK are currently pre-or-post menopausal? Which led us… https://t.co/Ke1b9BXgnd
1 day, 1 hour ago • reply • retweet • favourite

@escentual Thanks so much, Dr Heather Currie MBE for sharing your expertise with us! Anyone looking for answers to questions o… https://t.co/G6JoxoIAmE
1 day, 8 hours ago • reply • retweet • favourite

@escentual Kate’s latest tech edit focuses on two recent releases that have “not only have been carefully crafted to meet the… https://t.co/fcejjTWfAO
3 days, 5 hours ago • reply • retweet • favourite