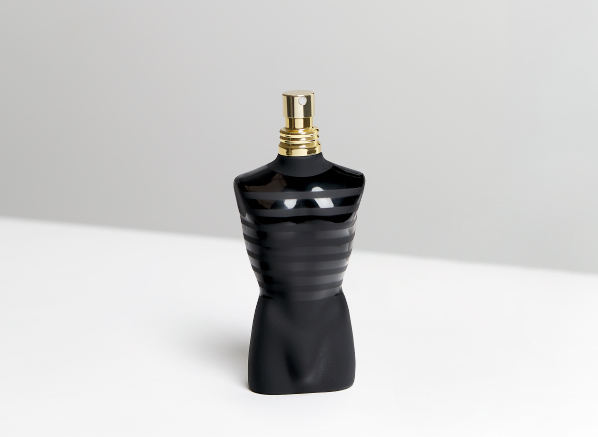 You may be familiar with the original Le Male Eau de Toilette, whether you know it for its oriental-aromatic scent or its iconic bottle. 25 years later, Jean Paul Gaultier have added another full-bodied fragrance into the mix: Le Male Le Parfum. And it’s been given a bold, intense and woody-oriental revamp.

This fragrance review will cover everything you’ll want to know about this elegant scent – from the notes to longevity. But I’m going to start with the smell!

There’s a reason why Le Parfum has replaced the Eau de Toilette’s sailor’s outfit with an officer’s uniform: it’s dominant and in charge. Everyone I’ve spoken to about 2020’s Le Male has agreed that it’s bold and powerful, which is exactly what was intended.

I’ll go into more detail about each specific fragrance note next, but I want to first explain the mood of this Eau de Parfum.

When you first spray Le Male Le Parfum, it feels very masculine and intense: it’s a fragrance that wants to be noticed. It’s warm, spicy and strong. But it reveals a more elegant and sophisticated tone as it develops – and somehow, it does so without losing its strength.

A special mention has to go the perfumers, Quentin Bisch & Natalie Garcia-Cetto. You might recognise their names; they’re behind a number of Jean Paul Gaultier’s well-loved Le Male fragrances.

If you’re familiar with the iris heart and vanilla bean base of Valentino Uomo Intense, then we think you’ll love Le Male Le Parfum, while it also reminds us of Prada L’Homme Intense, which similarly gives iris a masculine reinvention.

The top note is cardamom; this spice gives the Eau de Parfum its power and strength thanks to its hot, almost aromatic tone.
The heart notes are lavender and iris; this floral pairing adds a sense of vibrancy. Aromatic lavender is refreshed by iris, a powdery note that can be used to create a woody feel.
The base note is vanilla; sweet, cosy and almost-edible, vanilla gives the fragrance its oriental classification. When vanilla warms on the skin, it creates a sensual mood; it’s a note that you’ll want to breathe in for hours on end.

If you know the original Le Male Eau de Toilette well, then you’ll notice a lot of the same notes – the bases both use vanilla. But where the 1995 edition offers a fresher start as it opens with mint, this fragrance opts for a hotter alternative and adds a dash of iris to revitalise the heart. 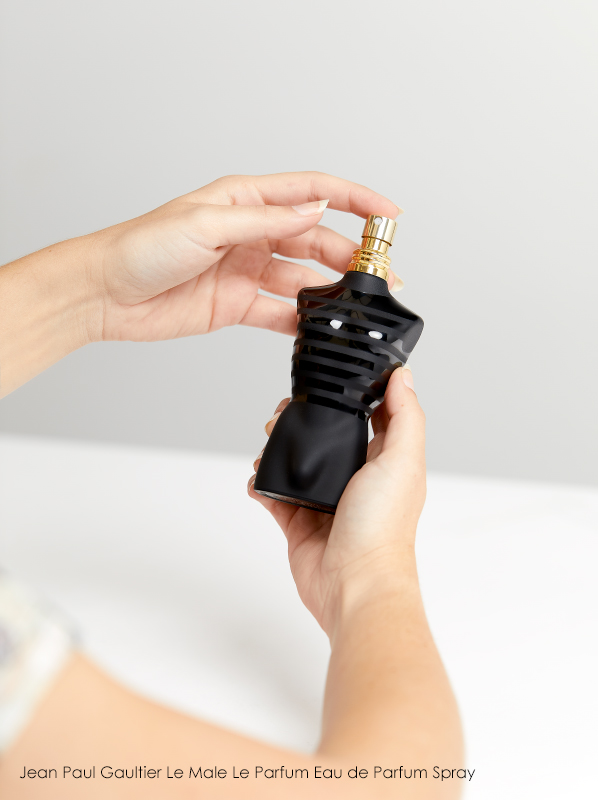 If you’re anything like me, you’ll trick yourself into thinking that you only buy a fragrance for its smell. But we all know that the bottle can sometimes feel just as important; I’m certainly guilty of picking a fragrance because of its look.

And thankfully, Jean Paul Gaultier is a French fashion designer, so style is important.

Le Male exudes style; it’s held in a sleek, sophisticated and seductive bottle. Just like the scent, Le Male Le Parfum’s flacon is a moody and intense version of the 1995 original, as the bright blue tones of the early Eau de Toilette are replaced by inky black shades.

Of course, the torso shape remains, but this time it’s dressed up in a charcoal-hued officer’s jacket with smooth, matte black lines. The golden spray top and neck guard add a glamorous feel. And the finishing touch? The bottle sits within a red velvet base that’s revealed once the classic tin can is lifted away. Even the can links back to Jean Paul Gaultier’s designer heritage, as he created a bracelet that mimicked a tin can. 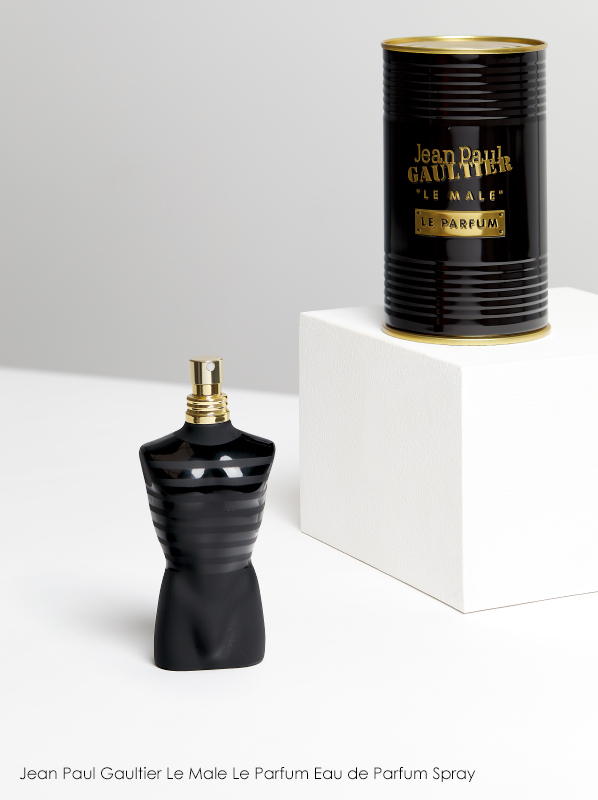 The name gives it away; it’s marketed as a fragrance for men. And the first time I tried it, I thought, ‘I wouldn’t wear this; it’s way too powerful and masculine’. But as it developed, I grew to love it and I definitely think I could wear it (even as someone who tends to go for typically sweet, fruity or floral perfumes!). I think that’s down to the delicious vanilla base. And I asked my Mum what she thought, and she would happily wear it because she likes to go for bolder perfumes that she can rely on.

And here at Escentual, we think it’s important that you choose a fragrance that suits you and makes you feel confident, regardless of what the perfumer intended.

Eau de Parfums generally last four to five hours. When I tested this fragrance out with my Mum and Dad, that was one thing they both took away from it: it’s very long-lasting. The longevity of a fragrance can admittedly vary from person to person, but we’ve certainly been impressed by it. It surpassed the four-hour test for me; when I wore it on my wrist, I could still smell a subdued, vanillary tone long after six hours. In fact, my Dad tried it at 2pm one afternoon and – after exercising and showering in the evening – could still smell it faintly on his wrist the next morning.

What My Family Think of Le Male Parfum:

I’ve made it clear by now that my Mum and Dad have kindly agreed to help test Le Male. They’re both in their 50s and self-confessed fragrance novices, so I was intrigued to find out what they thought…

If you had to describe it in three words it would be: “Confident, long-lasting and memorable.”

Describe Le Male Parfum in more detail: “It’s very bold so you wouldn’t need to use much of it. For me, it has an aromatic tone. I think this is a fragrance for someone who is confident in themself.”

Where would you wear it?  “It’s quite strong for me, but I can see men wearing it comfortably in the day and evening. However, I think it would be great for late afternoon and evening wear.”

What do you think it smells similar to? “I can’t think of a specific fragrance that it reminds me of. But because it’s so intense, it reminds me of a confident professional.”

If you had to describe it in three words it would be: “Confident, secure and mellow.”

Describe Le Male Parfum in more detail:“It’s very bold at first but that’s what I like about it. Even though it’s supposed to be for men, I could see myself wearing it because I like strong perfumes. Plus, I think it mellows nicely, so it feels more elegant as it develops on your skin.”

Where would you wear it?  “I think you could wear it comfortably anywhere, but because it’s strong, some people would prefer it as an evening fragrance. It’s like a little black dress; you can dress it up or down to match the time of day or event.”

Why Is Le Male Escentual?:

Le Male Le Parfum’s predecessor is a bit of a cult male fragrance, so we were so excited to see a new addition to the range. Fragrance is a huge part of heritage – scent is even a part of our name – so we love being able to offer a full collection, so you can fall in love with a new fragrance from a brand that you might have grown up with, or find a new perfume from a name you’ve heard before and always wanted to try.

Do you think you’ll like Le Male Le Parfum? After reading our review, what do you think it smells similar to? Let us know by tagging us @Escentual on Twitter, Facebook, or Instagram and use #EscentualScents

This entry was posted on Sunday, September 6th, 2020 at 9:25 am and is filed under #EscentualScents, Fragrance, Kate Avetoomyan, Men, Tried & Tested. You can follow any responses to this entry through the RSS 2.0 feed. You can skip to the end and leave a response. Pinging is currently not allowed.