2020 is a landmark year for Escentual – it’s our 20th! That’s right, today is our birthday, and our only wish this year is for 20+ more! Our success over the last two decades has been thanks to the strong relationships we’ve built with our team, brands, and you – our wonderful customers. We’ve accomplished incredible things since 2000, which we couldn’t have done without you, so it made sense to share and reminisce on our milestone moments with you. Whether you’ve been here from the beginning or placed your first order today, thank you! 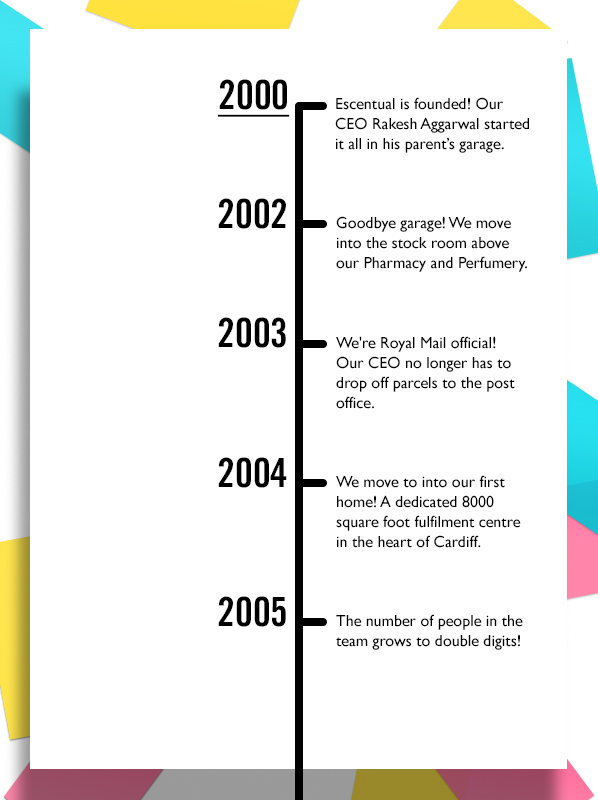 Our CEO, Rakesh Aggarwal started Escentual.com from his parents’ garage in 2000. Inspired by the beauty products in his father’s pharmacy and noticing the gap for a beauty e-commerce site, Rakesh spent five thousand pounds on website development and took a four-day course in London to learn how to use it – the rest is history.

Escentual had a successful first three years in business despite facing a recession. In 2002, we moved from the garage to a bigger space; the stock room above our Cardiff Pharmacy and Perfumery. In 2003, we received enough orders to register a collection with Royal Mail; this was big news for our CEO who, before this, dropped off all of the orders to the post office himself!

You never forget your first home. In 2004, we moved into our first dedicated fulfilment centre. At 8,000sq ft it was a little bigger than the garage and stock room we’d grown used to!

In two short years, we outgrew this space. In 2006, we went vertical by installing an integrated hanel rotomats – over 9 metres tall – plus the team created an automated pick and storage solution. We were able to store and ship more orders than ever before! 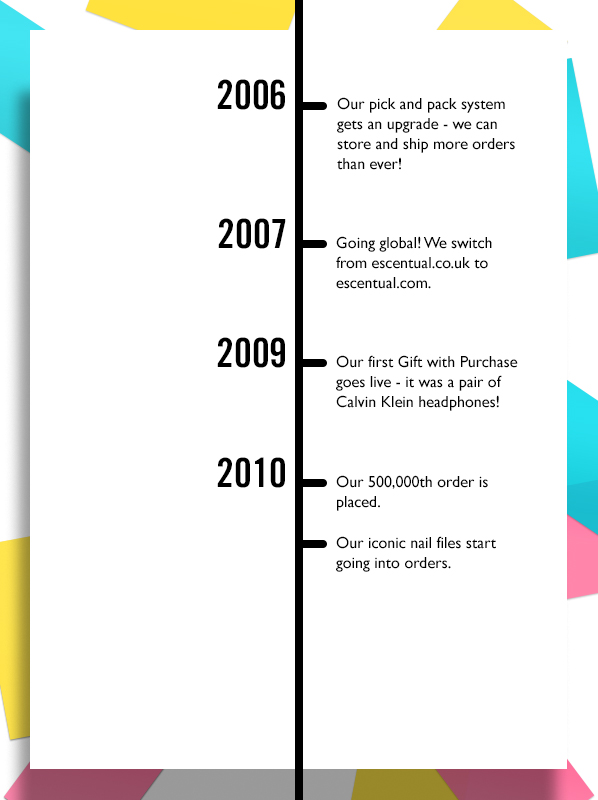 Fun fact, Escentual.com started as Escentual.co.uk. We switched to .com in 2007 to reach a global audience. Now, in 2020, Escentual ships to 164* countries worldwide.  In 2008, we continued to explore new audiences and co-hosted our first London event with our L’Oreal partners.

Many brands wouldn’t celebrate their first GWP (gift with purchase), but we’re not ‘any’ brand. Giving back to our customers is very important to us, and so we pride ourselves on offering the best offers. One of our first was a pair of Calvin Klein headphones!

2010 was a big year for Escentual. We shipped half a million orders, more members joined the team, we started adding our famous nail files into parcels, and our blog launched, which now hosts nearly 3000 edits! 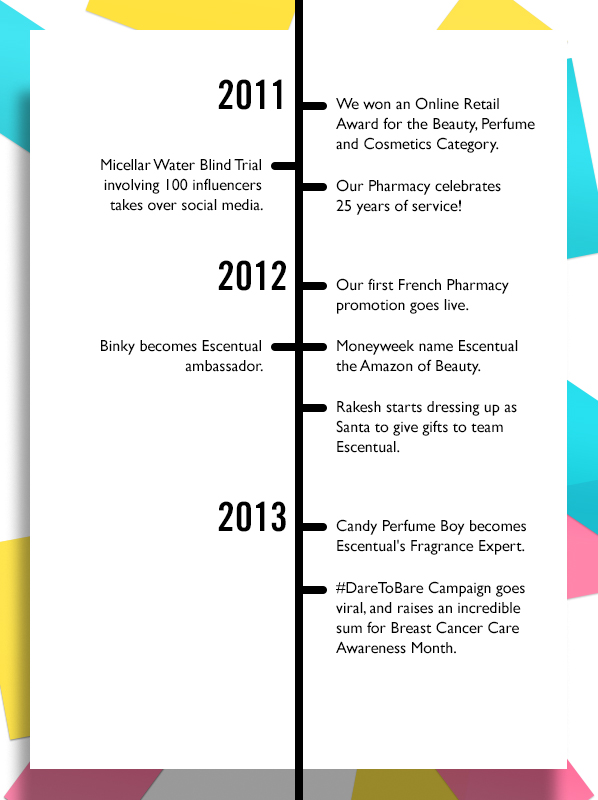 2011 was the year of many firsts for Escentual. We won our first award; Online Retail Award Winner in Beauty, Perfume, and Cosmetics category. We launched our first blind trial with 100 influencers – who remembers our Micellar Water trial? Plus, we offered customers our first try before packs, which we brought back in 2020 with our #EscentualScents sample set!

2012 put Escentual on the map. Most notably, it was the year we brought French skincare to the UK and launched our very first French Pharmacy promotion – 2020 marks our 32nd!

We were also named ‘The Amazon of Beauty’ by Moneyweek, welcomed Made In Chelsea star, Binky Felstead as an ambassador, plus the team ran 10k for charity; Escentual has raised hundreds of thousands of pounds for Kidney Wales Foundation over the years.

2012 was also a landmark year for our CEO, Rakesh; The Times ran an article on Escentual’s success, and we can’t forget, it was the first Christmas Rakesh dressed up as Santa to gift the team, which is now a big tradition!

Fragrance is in our heritage; it’s even in our name, and so we were delighted to welcome our very own Fragrance Expert to the team in 2013. Thomas Dunckley, also known as The Candy Perfume Boy is a 5x Jasmine Award Winner and has written more than 350 edits for Escentual. 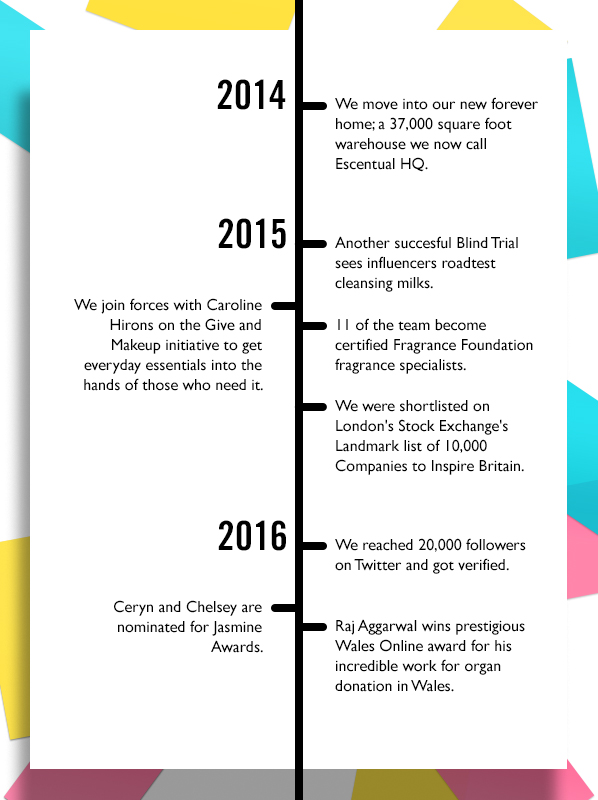 We waved goodbye to our first home in 2014 and moved into the 37,000sq ft warehouse we now call HQ. A big move coincided with a big launch; in 2014, we launched La Roche-Posay Serozinc exclusively, which sold out within a week!

Proud to see our company featured in @Telegraph 1000 companies to inspire Britain pic.twitter.com/5pU8GdM8oN

Team Escentual didn’t stop smiling in 2015. We were listed on London Stock Exchange’s 1,000 Companies to Inspire Britain, and we won Most Engaging Beauty Brand. The team didn’t stop achieving either; 11 of the team became certified fragrance specialists, we partnered with London Met University to research bacteria in makeup, and ran our second blind trial; this time cleansing milks took the spotlight!

We didn’t slow down after a remarkable 2015. In 2016, our Twitter became verified, Chelsey and Ceryn received their first Jasmine Award nomination, and in 2017, our CEO made his first ITV news debut. 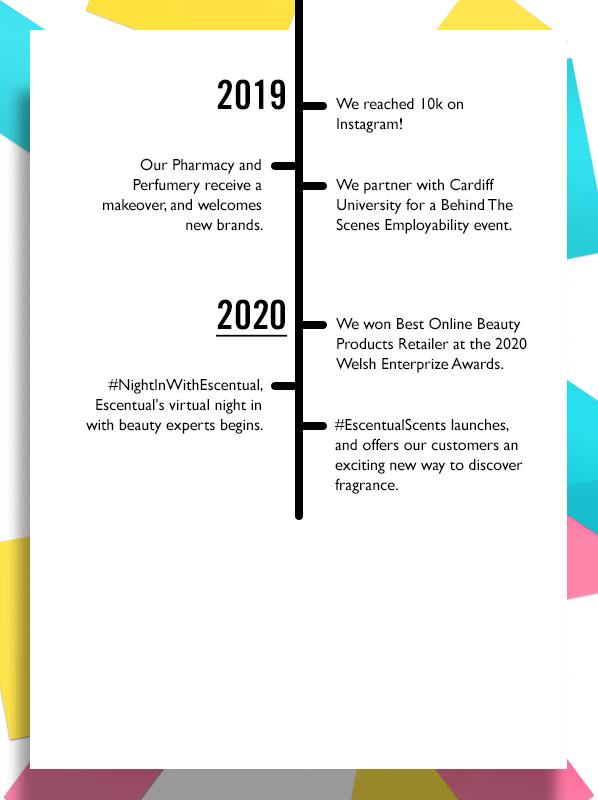 2019 brought with it more milestones too; we reached 10,000 followers on Instagram, our Pharmacy received a 360 makeover and welcomed more brands, plus we invited Cardiff University students inside our headquarters for an exclusive Behind The Scenes event.

We dedicated 2020 to bringing people together with beauty – virtually, of course. The team unveiled daily #BeautyBreak and #NightInWithEscentual Instagram lives to keep our community connected, and brought back our blind fragrance trial. This time, the trial was called #EscentualScents, and it was bigger than ever!

We rounded off the year with another great win; Welsh Enterprise Awards crowned us Best Online Beauty Products Retailer 2020.

• 20 customer reviews that have made our day along the way

• Meet the people behind Escentual

*Shipping destinations are changing daily due to COVID-19 outbreak.

This entry was posted on Monday, November 2nd, 2020 at 7:15 am and is filed under Escentual. You can follow any responses to this entry through the RSS 2.0 feed. You can skip to the end and leave a response. Pinging is currently not allowed.

@escentual Where have you clipped your #SunPoverty Escentual SPF50? Show us using #HowDoYouClipIt or join the challenge on our… https://t.co/MN5GURH5ul
11 hours, 20 minutes ago • reply • retweet • favourite

@escentual Thanks so much for helping us raise awareness of #SunPoverty! https://t.co/zDJB0cEZys
16 hours, 27 minutes ago • reply • retweet • favourite

@escentual Psst... We've found out the secret to glowy, and we have to share it with you 👀 Find out our three simple ways to… https://t.co/4LhF7KH9GY
2 days, 17 hours ago • reply • retweet • favourite