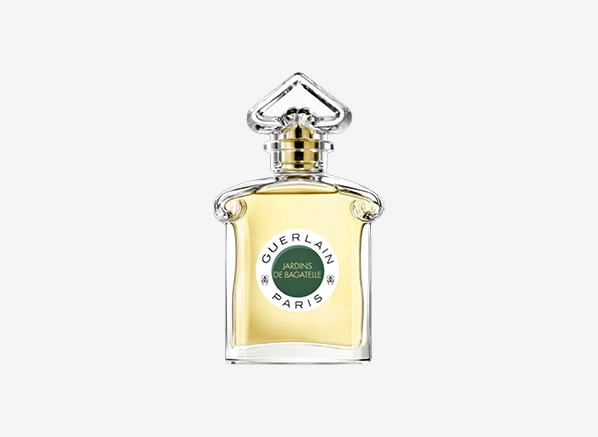 Showcasing an array of works from over five generations of master perfumers, GUERLAIN have curated their Legendary fragrance collection to preserve the pioneering perfumes that revolutionised the way we view scent.

An iconic addition to the line, GUERLAIN Jardins de Bagatelle Eau de Toilette gives fresh florals a sensuous makeover as the innocence of white florals are given a captivating twist. Read on to find out more…

Jardins de Bagatelle transports you to the middle of a fragrant garden, bursting with flowers. White florals are prominent throughout as fresh, bright bergamot dives into a heart of heady jasmine, honeyed neroli and velvety gardenia. The symphony of flowers continues into the base of tuberose, which is underscored by soft woody notes.

GUERLAIN’s luminous floral scent was inspired by France’s Bagatelle garden; known as the most romantic garden in Paris, it caused Jean-Paul Guerlain to race home and immediately create the fragrance.

But what’s the history behind this garden? Well, Count of Artois accepted Queen Marie-Antoinette’s challenge to build a small chateau in less than 64 days, resulting in the folly that lies at the heart of the delectable Bagatelle garden as a feat of engineering.

Any nature lover, keen gardener and floral fragrance fan will be overjoyed by the bouquet of flowers and fresh greenery found in GUERLAIN’s legendary fragrance, Jardins de Bagatelle. During the time of King Louis XVI, the aphrodisiac powers of tuberose were thought to cause unwed pregnant women to faint – and now the flower’s rich sensuality is used for one’s pleasure and enjoyment.

Aptly named, Jardins de Bagatelle truly smells like a springtime walk in a garden lined with decadent flowers. There is also an Eau de Parfum variation of Jardins de Bagatelle, which is similar to the Eau de Toilette but it’s slightly less sweet and with a more dominant earthiness.

Any fragrance can be enjoyed by anybody, regardless of gender. Typically, floral fragrances are worn by women and Jardins de Bagatelle does admittedly have a more traditionally romantic, floral feminine tone.

As Jardins de Bagatelle settles onto the skin, its neroli and jasmine tone remains particularly strong. The initial scent remains fairly consistent throughout the day, while reducing its intensity as time slips by.

Designed by Raymond Guerlain, Jardins’ glorious ‘inverted heart’ shaped stopper sits above a duo of graceful scrolls that are typical of Art Nouveau. The different shades of green complement the hint of gold that adorns the neck; it wouldn’t look out of place in the elegant folly that inspired the fragrance.

Yes,this is a great perfume - and the price at Escentual.com is pretty competative. A highly recommended product generally.

This entry was posted on Friday, December 10th, 2021 at 10:29 am and is filed under Fragrance Review. You can follow any responses to this entry through the RSS 2.0 feed. You can skip to the end and leave a response. Pinging is currently not allowed.

@escentual Our tip to get through #BlueMonday is to spray your favourite mood-boosting fragrance. What scent have you got on t… https://t.co/xzWEQURcKs
3 days, 12 hours ago • reply • retweet • favourite