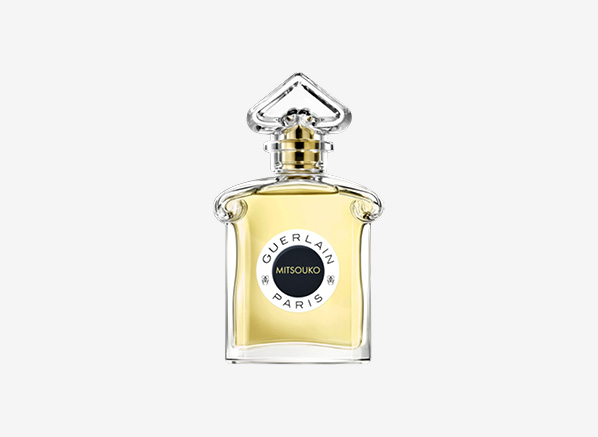 With backstories and histories as beguiling as the scents themselves, GUERLAIN have created highly influential perfumes ever since their origin in 1828. Their renowned perfume heritage is celebrated throughout the Legendary fragrance collection, which is still loved by perfume fans to this very day.

A beloved addition to the line, GUERLAIN Mitsouko Eau de Toilette is full of secrets and mysteries, except for one fact: it smells divine.

A fruity-chypre filled with mysterious rich earthy tones, Mitsouko Eau de Toilette beckons you in with a touch of bergamot before its sweet peach, heady jasmine and romantic rose heart unfolds. The base is full of earthy undergrowth notes that have a green edge and a woodiness that pairs beautifully with the spices and fruity sweetness. The base is nuanced by a warming touch of spice and earthy, smoky vetiver for a full-bodied and perfectly balanced fruity-chypre scent.

Mitsouko was originally created as an Eau de Parfum but the same entrancing story remains the inspiration for the Eau de Toilette. Jacques Guerlain named his creation ‘Mitsouko’ after the heroine of the bestselling French novel, ‘La Bataille’. Mitsouko is an enthralling character, but her tale is destined for tragedy as she loves two men at once: a Japanese and British officer, both of whom ultimately went to war. Mitsouko’s calm emotions at a time of mystery and danger inspired the creation of the Mitsouko fragrance, its unmistakable beauty but mysterious origin reflecting Mitsouko’s secrets perfectly.

If you are often torn between what fragrance to wear, you’ll love the many tones and captivating nature of Mitsouko Eau de Toilette. The dynamic combination of fruity, floral, spice and earthy tones satisfies every fragrance fan craving a beautifully balanced scent.

The thing that sets Mitsouko apart is its clever blend of sweet, juicy fruits and florals, balanced by the deep, dark earthy facets of its base. So, it’s almost like an opulent market full of fresh, velvety fruits that have just been picked from the tree, while the heady aroma of spices perfume the air.

Though inspired by a female heroine and originally designed for women, Mitsouko combines scents that are traditionally both masculine and feminine to create a spicy fruity-chypre that can be seen as a unisex fragrance.

The true beauty of Mitsouko is revealed as it wears on the skin, changing throughout the day to offer different levels of sweetness and spice as it develops. Amongst the bold undergrowth and hot spices, surprisingly the scent has a fresh and bright undertone after settling.

Making a regal statement, the iconic GUERLAIN ‘inverted heart’ glass bottle epitomises the legendary status of Mitsouko. The weighted glass flacon features rolling Art Nouveau scrolls and a hint of gold, hidden in the hollow heart stopper just like Mitsouko’s secrets. As the finishing touch, the opulent gold-hued perfume is offset by the sleek black emblem that adorns the front of the fragrance.

I heard a discussion on radio re perfumes and thought I would try Mitsouko. I am very please I did so.

This entry was posted on Friday, December 10th, 2021 at 9:32 am and is filed under Fragrance Review. You can follow any responses to this entry through the RSS 2.0 feed. You can skip to the end and leave a response. Pinging is currently not allowed.

@escentual Do you ever wear a particular perfume because it makes you feel a certain way? We certainly do! And we thought we'd… https://t.co/nnkFkKFwpp
1 day, 9 hours ago • reply • retweet • favourite

@escentual @Jack95862637 Thank you for reaching out. We are so sorry to hear you are experiencing problems with your order. Pl… https://t.co/kqOwj8mVDc
2 days, 7 hours ago • reply • retweet • favourite

@escentual A simple yet effective hydrating skincare routine for men, check! Have you ever heard of Lab Series? 🧴… https://t.co/A02ixAkXhK
2 days, 23 hours ago • reply • retweet • favourite

@escentual Did you know that one of @TOMFORD's all-time favourite fragrance notes is patchouli? That's why you'll find it at t… https://t.co/qPwI5ITl9C
6 days, 9 hours ago • reply • retweet • favourite