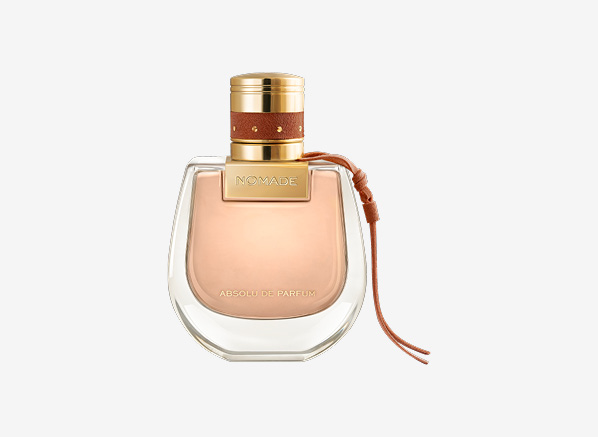 In true Chloe style, the designer fragrance brand is expanding its classic Nomade fragrance collection to include thrilling new takes on the original Eau de Parfum. The intense version, Chloe Nomade Absolu de Parfum, is a bold rewrite that tells a tale of adventure without losing the joyful essence of a Chloe fragrance. Though the main notes honour the Nomade sister scents, Nomade Absolu has a fire that sets it apart from the rest…

Nomade Absolu comes barrelling out of the bottle, determined to showcase every delectable note within the very first inhale. The top note of mirabelle plum is soon met by the aromatic davana herb at the fragrance heart, providing a layer of sweet spice with an exotic juicy twist of plum. The standout notes are found in the rich base of masculine oak moss and soft sandalwood, which add an earthy warmth to the perfume. As the scent settles, each of the notes become velvety smooth as they’re wrapped up in smooth, creamy sandalwood.

Created by Quentin Bisch, Nomade Absolu tells the story of freedom, inspired by the independent woman. The way the warmth and subtle spices burst out of the fragrance in waves feels like an adventure, taking you to an exciting new destination of exuberant bliss with every spritz.

If you love Chloe fragrances but are looking for one with a more typically masculine edge, you’ll love the warm woody feel of Chloe Nomade Absolu.

Chloe Nomade Absolu is a woody-chypre that shares a similar style with other Nomade scents. But this time, the emphasis is on the ‘woody’ as less of the delicate florals are found here, especially compared to the Eau de Parfum.

We believe that anyone can enjoy any fragrance, regardless of gender or who the scent is marketed towards. Nomade Absolu has less of the obvious ‘femininity’ compared to other Chloe scents as its earthiness has a more gender neutral appeal. However, the fruity and floral elements create a traditionally more feminine presence.

The initial spritz of Chloe Nomade Absolu is very similar to the dry down hours later, the intensity remaining on the skin as the scent warms to be more powerful.

Reminiscent of the iconic Chloe saddle bag, the curved glass flacon is beautifully elegant but with a cool relaxed edge. The weighted glass bottle is adorned with a golden stopper and a beautiful hazelnut suede tassel with delicate gold studding, adding a playful Western touch to the perfume.

The box is recyclable.

This entry was posted on Friday, March 4th, 2022 at 10:17 am and is filed under Fragrance Review. You can follow any responses to this entry through the RSS 2.0 feed. You can skip to the end and leave a response. Pinging is currently not allowed.

@escentual Trying to make it to January payday... #Valentino We have so much love for Kristen McMenamy and @MaisonValentino… https://t.co/Lr664ECUEn
22 hours, 39 minutes ago • reply • retweet • favourite