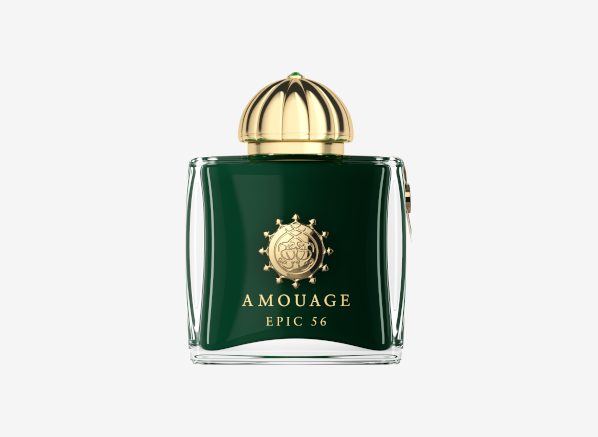 If you’re a fan of Amouage Epic Woman Eau de Parfum, you’re going to want to hear all about the bold, rich and intense version: Amouage Epic 56 Woman Extrait de Parfum. Its impressive concentration and the extended ageing process have rendered it a fragrance that’s impossible to ignore. Keep reading to find out more…

Amouage Epic 56 Woman Extrait de Parfum sends the original Epic Woman into overdrive. It features an exceptional 56% perfume oil concentration and has been aged for nearly five months to allow the quality of its signature notes – rose, spice, frankincense and wood – to shine.

Cécile Zarokian’s rich ambery fragrance opens with a nose-tingling blend of warm spices: cumin, pink peppercorn and cinnamon. The heart unfolds with velvety; perfumed Centifolia rose, sweet jasmine tea and a touch of rose-like geranium before the rich opulence of the base take over your senses. Amber, musk, oud and frankincense sit on a bed of powdery orris, creamy sandalwood and guaiac wood as smoky patchouli and sensual, sweet and moreish vanilla add a gourmand edge to the rich, woody and expensive amber facets.

The original Epic Women takes inspiration from the legends of the Silk Road, which remains celebrated in Epic 56 Woman Extrait as the aroma contains a wealth of cherished fragrance notes traditionally used in Eastern perfumery.

But the Extrait de Parfum builds on the original perfume to offer an even more potent signature. Typically, fragrances mix a concentrate (containing fragrant oils) with an alcoholic base, often topped up with a touch of water and liquid UV filters, stabilisers or colourants. An Eau de Parfum typically contains 15% – 20% oils, but Amouage Epic 56 Woman features a 56% concentration of perfume oil to create a rich, bold and ultra-long-lasting signature.

If you want high-quality perfume, that’s what you get here. Epic 56 Woman epitomises Amouage’s expertise in niche perfumery. It features the finest fragrance notes in a jaw-droppingly high concentration.

Naturally, Amouage Epic 56 Woman Extrait de Parfum smells similar to Epic Woman’s predecessor. The note structure is very close, but Epic 56 is more potent than the original.
It shows off a deeper and more complex ambery construction, leaving a lasting impression on the senses.

As the name suggests, this fragrance is marketed toward women. However, all genders will enjoy its warm, spicy and ambery nature. Anyone who loves bold, attention-grabbing signature scents will adore it.

I try not to make sweeping claims about how long a fragrance lasts as it can change slightly from person to person. However, I’d be very surprised if anyone ever turned around and said this was anything but incredibly long-lasting. Thanks to its impressive concentration of perfume oil, this lasted a strong twelve hours on my skin (yes, one spritz shared between both wrists for day-long wear).

Epic 56 Woman is housed in an ultra-chic flacon that looks like a piece of art. The centre of the glass is a deep emerald green, which beautifully contrasts the glistening gold details. The lid is probably my favourite element; it’s magnetic, so it snaps back into place with a satisfying click. It has a glistening green emerald that feels like it should be in a jewellers on Fifth Avenue.

This entry was posted on Tuesday, July 5th, 2022 at 10:39 am and is filed under Fragrance, Fragrance Review. You can follow any responses to this entry through the RSS 2.0 feed. You can skip to the end and leave a response. Pinging is currently not allowed.

@escentual @whatlauraloves Thanks so much for being part of our #SunPoverty SPF Application video, Laura! ☀️❤️
1 day, 13 hours ago • reply • retweet • favourite

@escentual Where have you clipped your #SunPoverty Escentual SPF50? Show us using #HowDoYouClipIt or join the challenge on our… https://t.co/MN5GURH5ul
2 days, 11 hours ago • reply • retweet • favourite