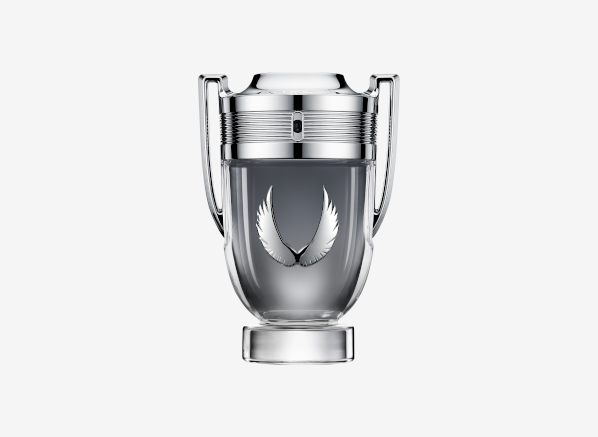 Fresh, bright and utterly energising, Paco Rabanne Invictus Platinum is the much-anticipated 2022 addition to the fan-favourite Invictus collection. Read on to find out why fans of the range will want to try this fresh new flanker for themselves…

At first, Invictus Platinum is energetic and vibrant as a sharp, refreshing grapefruit note tingles the senses. But this isn’t just a glass of cool grapefruit juice; it’s a stylish cocktail enhanced by a daring dash of aromatic absinthe.

As Paco Rabanne’s vegan fragrance develops, it settles into a surprisingly elegant lavender accord, which cleverly brings out both the herby, aromatic and subtly sweet floral elements of this fragrant note as it sits alongside earthy oakmoss. As Invictus Platinum Eau de Parfum warms on your skin, it unveils a rich, woody blend of patchouli and cypress for a strong, long-lasting signature.

If you’re a fan of the Invictus range, you’re going to love the Platinum version.

As you’d expect, Invictus Platinum shares similarities to the rest of the Invictus range while still standing out as a signature scent in its own right. It borrows the freshness of the original Invictus Eau de Toilette by building on the grapefruit zest of the top while stealing the woody side and lavender tone of victory.

Fragrance has no gender to us; as long as you enjoy a scent, that matters. That being said, if you prefer to shop fragrances by gender, then it’s important to note that Invictus Platinum is presented as a men’s fragrance due to its aromatic-woody nature.

Invictus Platinum Eau de Parfum lasted a good six hours on my skin, which is pretty impressive, bearing in mind that EDPs typically last between four and five hours.

It’s clear that this is an Invictus fragrance flanker just from the design; the scent is housed in a trophy-shaped bottle, which has been refreshed in sleek platinum silver and opaque grey hue. For the first time, the iconic Invictus wings are emblazoned on the front of the bottle.

But don’t be tempted to pull the lid off; the fragrance is dispensed when you press on the large silver button on the top of the trophy (which looks as though it’s part of the design).

This entry was posted on Wednesday, July 13th, 2022 at 5:26 pm and is filed under Fragrance, Fragrance Review. You can follow any responses to this entry through the RSS 2.0 feed. You can skip to the end and leave a response. Pinging is currently not allowed.

@escentual @whatlauraloves Thanks so much for being part of our #SunPoverty SPF Application video, Laura! ☀️❤️
1 day, 18 hours ago • reply • retweet • favourite

@escentual Where have you clipped your #SunPoverty Escentual SPF50? Show us using #HowDoYouClipIt or join the challenge on our… https://t.co/MN5GURH5ul
2 days, 16 hours ago • reply • retweet • favourite