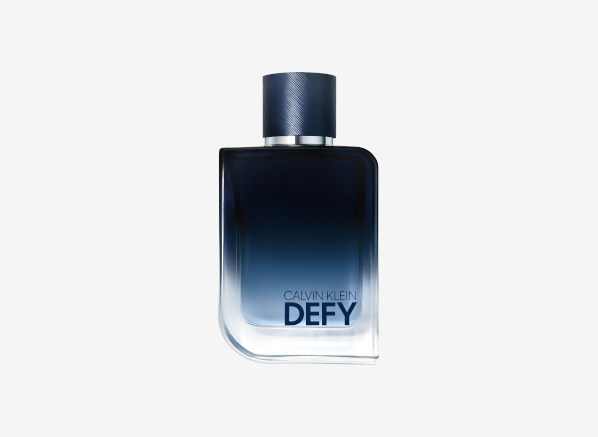 Calvin Klein Defy was first launched in 2021. One year later, an Eau de Parfum version has been released. It’s got the same rich woody tone as the original but an added warmth, depth and darkness that I love.

Keen to find out more about the differences between the original and the flanker? Read on for my full Calvin Klein DEFY Eau de Parfum review…

DEFY opens with the fresh, bright tones of mandarin oil, which is lifted by an exhilarating dash of black pepper. The velvety smooth yet ultra-sexy leather heart is a deep contrast to the freshness of the top. It combines saffiano leather and rich suede for a rugged, textured fragrance. The base of vetiver oil – responsibly sourced from Haiti – adds strength and longevity to the scent.

Calvin Klein’s 80.6% natural fragrance builds on the original’s signature woody tones to offer a darker, warmer twist. The story ties into this, offering a Calvin Klein aftershave that’s made for the most daring individuals.

If you loved the original Calvin Klein Defy Eau de Toilette, I’m confident you’ll like this longer-lasting intense fragrance. You can definitely tell it’s a Calvin Klein fragrance, but it also builds on the original to offer a richer, darker take.

Defy has a traditionally masculine tone. However, it’s definitely one to try if you love rich, leathery scents.

This CK fragrance is longer-lasting than the original, thanks to its Eau de Parfum strength. It lasted a good six to seven hours on my skin.

The CK Defy bottle evokes the CK brand with its textured, jean-like cap. Then, it represents the CK man throughout its glass shape; straight corners juxtapose round curves to represent both sides of the defiant and confident CK man: he’s vulnerable yet courageous.

And, of course, it’s a darker, broodier version of the Eau de Toilette.

This entry was posted on Friday, August 12th, 2022 at 5:33 pm and is filed under Fragrance, Fragrance Review. You can follow any responses to this entry through the RSS 2.0 feed. You can skip to the end and leave a response. Pinging is currently not allowed.

@escentual Do you find applying SPF to your little one tricky? Try these three ways for making sure you apply SPF correctly to… https://t.co/Kw1Z1INnxA
2 days, 11 hours ago • reply • retweet • favourite

@escentual Looking for that #FridayFeeling? Prada Paradoxe is the perfect floral scent to carry you through whatever you have… https://t.co/ZzU00dQGmY
3 days, 4 hours ago • reply • retweet • favourite

@escentual If you cringe when we say: orange lines, white patches, tiger bread skin, streaks, and an orange hair line, then yo… https://t.co/pKqar5xzYg
4 days, 1 hour ago • reply • retweet • favourite