The History of Clarins 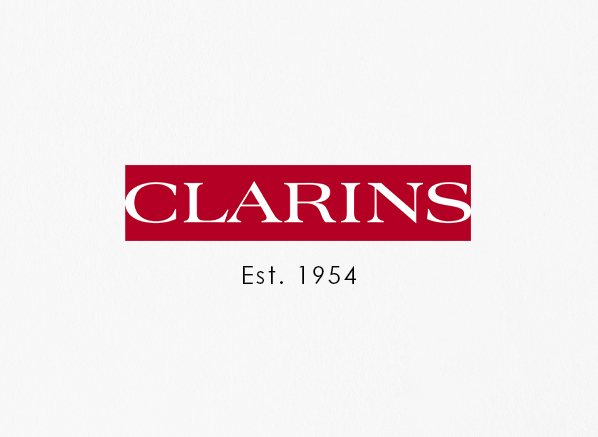 Clarins is one of the world’s most iconic skincare brands. For many of us, it’s one of those brands we’ve grown up with; perhaps you remember staring up at Clarins products as a child in a department store, or perhaps you remember watching a family member apply a sweep of a Clarins lipstick at her dressing table. Maybe you even remember the very first Clarins product you bought.

And there’s a reason we’re all so familiar with the family-run brand of Clarins: it’s the No. 1 prestige skincare brand in Europe. But the question is, how did Clarins clinch the top spot? It’s time to find out as we travel back through time and the history of Clarins…

Clarins was founded on the 15th March 1954, when Jacques Courtin opened his very first beauty spa on Rue Tronchet in Paris. The story goes that Courtin chose the name ‘Clarins’ based on a character he played in a school play. He loved it so much that he formally changed his name just over two decades after the brand was founded, becoming Jacques Courtin-Clarins in 1978.

But why was Clarins founded? Courtin was passionate about making beauty more real and natural; this ambition is reflected throughout every Clarins launch to this day. His revolutionary holistic approach to beauty centred around the belief that well-being and happiness were inextricably linked to beauty. 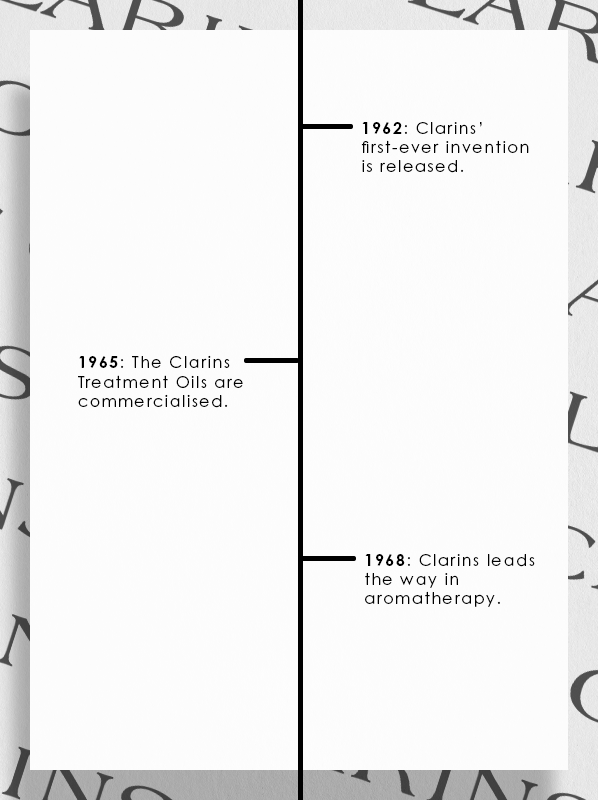 Following the ever-increasing success of the spa, Jacques Courtin released his first-ever invention in 1962: the Masvelt “Body Shaping Cream”. It was designed to streamline and shape the body whilst targeting cellulite (sounds like an early ancestor of the Extra-Firming Cream, if you ask me).

Three years later, the brand introduced a new collection that proved to be an instant success: the Clarins Treatment Oils. These oils were initially created for the spa but were later commercialised at customers’ request. So, in 1968, Clarins became the first major brand to sell 100% pure plant extract oils in perfume stores. As a result, lots of people were able to experience the benefits of aromatherapy for the very first time – all within the comfort of their own homes! In the same year, Clarins’ customer card was created and included in its packaging to meet the needs of its clientele. 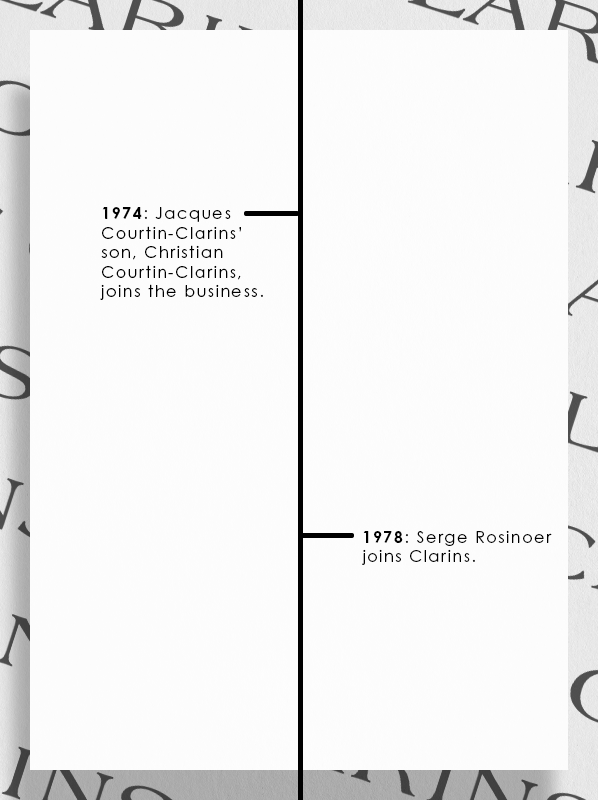 Two decades after Clarins was founded, Jacques Courtin’s son, Christian, joined the business as head of exports in 1974. He became the international spokesperson for the brand, accessible across 130 countries by this point in time.

In 1978, Serge Rosinoer joined Clarins; he’s credited with helping the brand grow into the business it is today. Throughout his time with Clarins, he went from Vice-President to General Manager and, finally, Chairman of the Board of Directors before being nominated to the Supervisory Board. 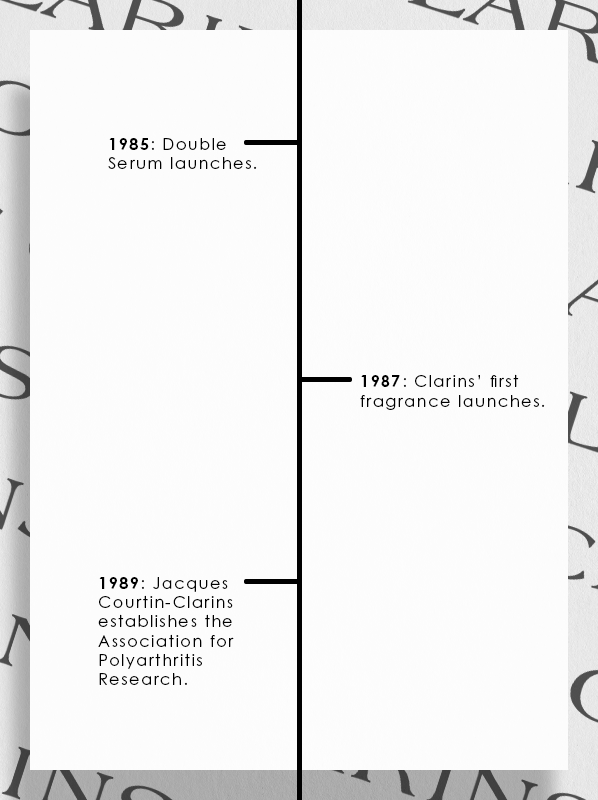 In 1984, Clarins was listed on the Paris Stock Exchange, which showed how much of a name it had made for itself, and offered a serious opportunity for growth. And it’s fair to say ‘84 was a big year for the brand; it also set up its manufacturing plant at the Pontoise site at this point, too so that Clarins skincare could be produced and prepped for worldwide shipping.

1985 was another big year for Clarins, too, though. Why? Because it saw the launch of one of their most iconic formulas to date: Double Serum. Jacques Courtin-Clarins wanted to create the ultimate anti-ageing formula using essential skincare ingredients; however, some ingredients were water soluble and others were oil-based, so they simply wouldn’t mix. Instead, Clarins’ 18 actives came in two bottles for customers to mix themselves. It was, quite literally, Double Serum. Fast forward ten years and the two formulas would unite in one bottle.

In 1987, Clarins’ first-ever fragrance launched: Eau Dynamisante. During the same year, Clarins made its mark on the future of the skincare industry, becoming the first premium French skincare brand to ditch animal testing.

Two years later, Clarins founder’s Jacques Courtin-Clarins, established the Association for Polyarthritis Research in 1989. This epitomised his passion for the health and happiness of the women in his life. His wife was suffering from rheumatoid polyarthritis, so he became heavily involved in research on chronic inflammatory rheumatic diseases; to this day, Clarins donate to Fondation Arthritis with each purchase of the cult-status Tonic Treatment Oil to support research. 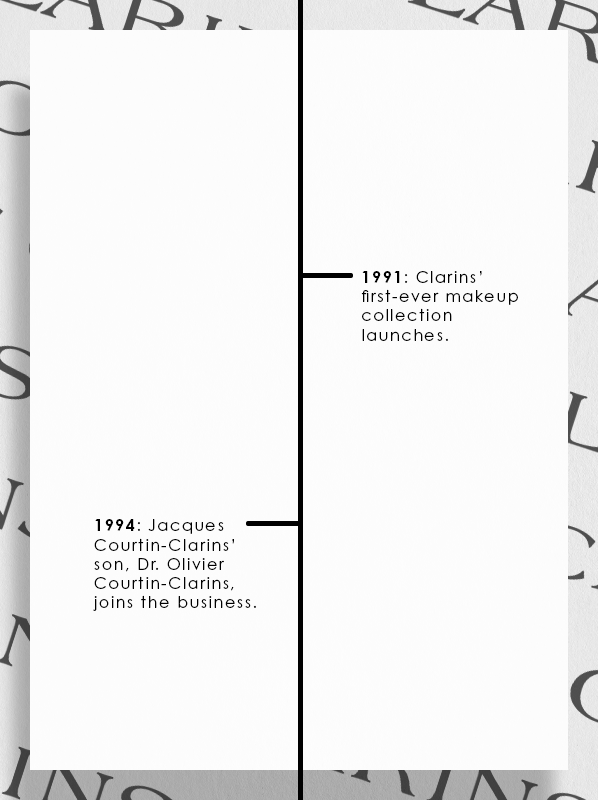 1990 marks an important date in the history of Clarins. They became the No. 1 in high-end facial skincare treatments in Europe – an accolade that it’s held ever since. Once Clarins had well and truly taken the skincare world by storm, it was time for a new challenge: makeup. Just one year later, prayers from around the world were finally answered. In 1991, the very first Clarins makeup collection was launched with the aim to reveal the natural beauty of every woman.

But that wasn’t all that Clarins had to offer in ‘91: recognising the developing needs of women living and working in increasingly-polluted environments, Clarins also pioneered anti-pollution skincare with their first collection dedicated to protecting the complexion against smoke, dirt, dust and more.

1992, however, marked a change for the brand as it branched out to acquire a stake in Thierry Mugler Couture, which resulted in Thierry Mugler Parfums. Just three years later, Clarins expanded with the acquisition of Azzaro Parfums.

In 1994, Jacques Courtin-Clarins’ other son, Dr. Olivier, joined the family business to develop their skincare products further and expand their spas across the globe. 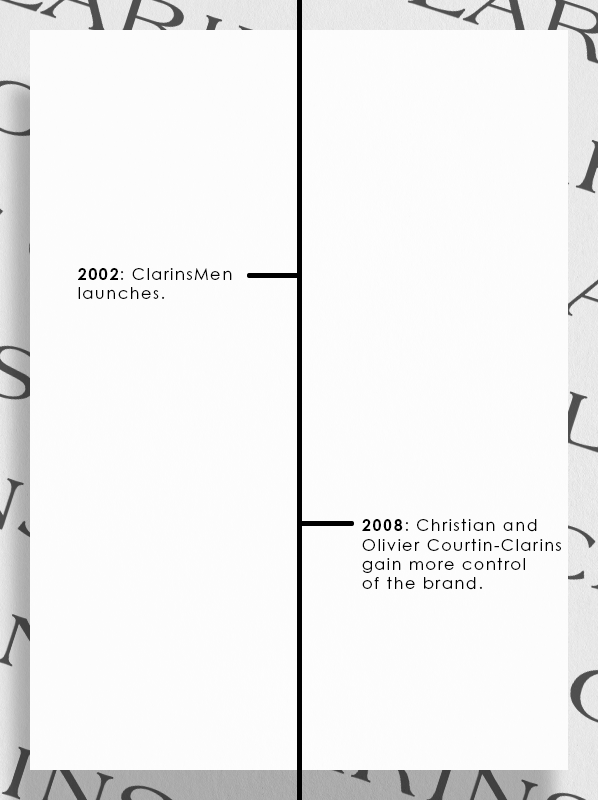 Two years after the turn of the millennia, Clarins dived into new territory by launching their skincare collection ClarinsMen.

One year after the death of their father, Christian and Olivier Courtin-Clarins initiated a takeover bid to gain more control of the fan-favourite brand and take them in a more sustainable direction. At the same time, the brand left the stock market. To this day, Clarins remains a wholly Courtin-owned brand. 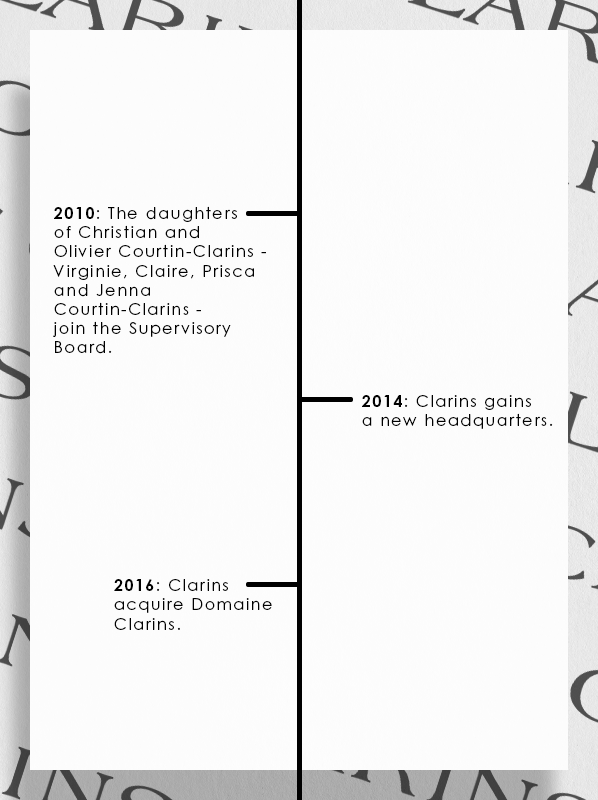 Yes, we know Clarins as one of the world’s leading luxe beauty brands, but there’s a lot more to them than meets the eye. For example, Clarins has been an Official Supporter of Solar Impulse since. Solar Impulse was nothing short of groundbreaking; it’s the first solar-powered aeroplane to fly successfully by night. Although this partnership ventures outside of the skincare and beauty world, it showcases Clarins’ passion for innovation and sustainability.
In 2010, the daughters of Christian and Olivier Courtin-Clarins – Virginie, Claire, Prisca and Jenna Courtin-Clarins – joined the Supervisory Board. Three years later, Virginie and Prisca Courtin-Clarins took on the posts of Marketing & Communications Director for Mugler Fashion and Spa, My Blend & Retail Director.

In 2011, Christian Courtin adopted the role of Chairman of the Supervisory Board after 11 years of leading the Management Board.

In 2014, Clarins gained a new headquarters in the 17th arrondissement of Paris shortly before the brand also gained a new CEO and President, Jonathan Zrihen, who was appointed the following year. By that point, he’d been working with the brand for a quarter of a century!

Virginie and Prisca Courtin-Clarins’ roles in the business continued to grow throughout the 2010s; in 2014, they joined the Managing Board before Virginie Courtin-Clarins became a Member of the Board of Directors and President of Mugler Fashion.

Clarins’ passion for the environment is clear. In 2016, Domaine Clarins, their outdoor laboratory sat in the heart of the Alps, was acquired by Clarins; to date, 18 plants have been researched and 4 revolutionary extracts have been produced here. But that’s not all; in the same year, Clarins supported local projects in Indonesia’s Sumatra Island, helping to improve and preserve the quality of land, reduce erosion and increase and diversify the income of local producers’ income through the PUR Projet. This is part of Clarins’ wider Seeds of Beauty partnership with PUR, which is dedicated to preserving biodiversity and supporting local communities. To date, Clarins and PUR Projet have planted over 536,000 trees worldwide.

In 2019, Clarins released My Clarins, their targeted skincare range for 18 to 29-year-old women. It marked a change in their collection, offering a line that not only catered to a younger demographic, but that is also completely vegan. 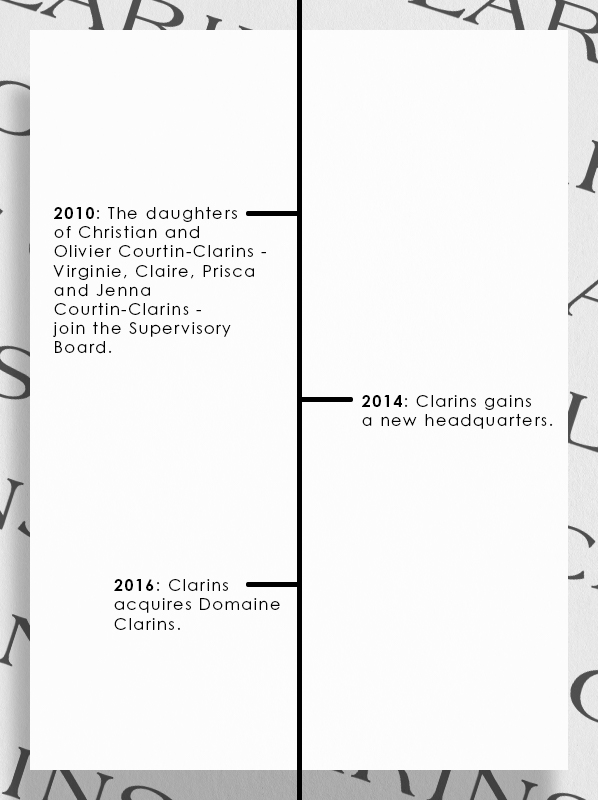 In 2020, Clarins’ working relationship with Mugler and Azzaro came to an end as both companies joined L’Oréal as Clarins refocused their energy on themselves. During the same year, Clarins opened a new centre in Shanghai.

In 2021, Clarins joined us one of our key ambassadors to support our mission to end #SunPoverty, continuing to prove that Clarins is a luxe brand that’s set on making a positive impact.

But what will Clarins look like in the future? Ultimately, the future of Clarins is – and always will be – respectful of its roots. To this day, Clarins continues to design and produce its products in France whilst honouring Jacques Courtin-Clarins’ philosophy of listening to the needs of women and developing safe, natural and highly effective skincare to meet their needs. And of course, even their most recent launches honour their spa heritage.

The beloved Clarins brand continues to reap the rewards of nature wherever possible; today, Clarins use over 250 natural plant extracts in their formulas. By 2025, it aims for 80% of their ingredients to be organically cultivated, 100% of packaging to be recyclable and to have reduced their carbon footprint by 30%.

Clarins continue to innovate to this very day. Although originally founded 15 years ago by Olivier Courtin, their myBlend line has branched off to explore an even more high-tech, personalised approach to beauty. Revamped in 2022, myBlend offers a combination of skin-nourishing supplements, skincare products and beauty tech – including a tech-driven LED mask.

Do you have a question about the history of Clarins that we haven’t answered? Tweet us @Escentual with your query!

The Story of Clarins Double Serum

This entry was posted on Tuesday, January 17th, 2023 at 9:00 am and is filed under History. You can follow any responses to this entry through the RSS 2.0 feed. You can skip to the end and leave a response. Pinging is currently not allowed.

@escentual Trying to make it to January payday... #Valentino We have so much love for Kristen McMenamy and @MaisonValentino… https://t.co/Lr664ECUEn
1 day, 6 hours ago • reply • retweet • favourite