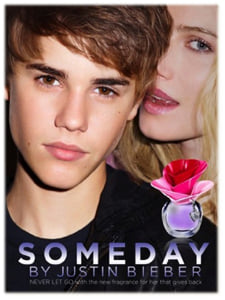 Justin Bieber is a singer, an actor, and a true pop culture phenomenon.

Since his discovery in 2008, Justin has enjoyed a whirlwind of success and is now firmly established as a global superstar. The ambitious teen has scored a string of hit singles - he even has a successful film under his belt!

In homage to his legions of devoted female fans, Justin has ventured into the world of fragrance with Someday, a scent described as being the key to his heart.