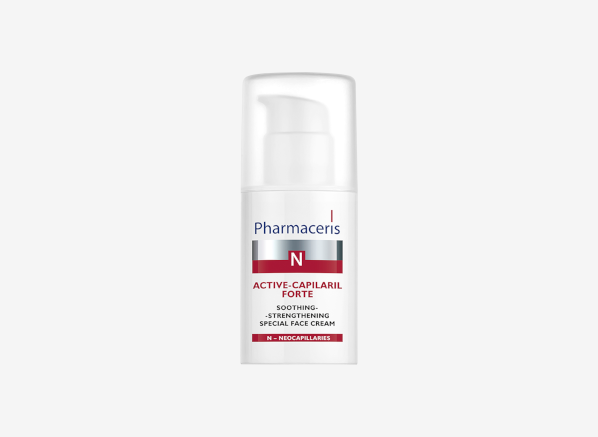 Pharmaceris’ N range is specially designed to soothe and calm redness-prone complexions. And the Active-Capilaril Forte Soothing Strengthening Special Face Cream has joined the ranks to offer a targeted daily moisturiser for persistent redness as well as visibly dilated and broken capillaries.

Now, I admit that I don’t often struggle with skin redness, but I could even appreciate just how soothing and cooling the Pharmaceris’ Special Face Cream is. Read on to find out everything you need to know about it…

The Most Important Thing About This Face Cream Is…

Showcasing Pharmaceris’ skincare expertise, the Special Face Cream contains high concentrations of diosmin and hesperidin, which are exceptionally effective in eliminating and preventing persistent redness. It does so by strengthening capillary walls and protecting them from further damage (which can cause those spidery-looking red splotches that are termed broken capillaries)

But the cream goes a step further than this to actually mimic the skin’s natural protective lipid barrier, which is our skin’s way of keeping moisture in and nasties out, helping to keep your complexion calm, hydrated and healthy. Not only does it work to soothe the skin and relieve irritation, but it also helps restore smoothness and elasticity.

And just look at the stats:

What Skin Type Is It For?

Although the moisturiser is suitable for all skin types, it’s been created for skin with persistent redness, visibly dilated and broken capillaries and a tendency to erythema (redness caused by increased blood flow).

If you struggle with skin redness and broken capillaries, you’ll know how much it can impact your self-esteem. But thankfully, Pharmaceris’ no-nonsense approach to skin redness utilises their years of expertise in calming troublesome skin and extensive clinical and dermatological tests to ensure a high-tolerance, high efficacy formula suitable for even the most sensitive skin.

The Pharmaceris N Soothing Strengthening Special Face Cream is packed with a whole host of actives to care for the unique needs of redness-prone skin; antioxidant hesperidin strengthens your blood vessels to protect them from damage, soothing canola oil offers anti-inflammatory benefits whilst fighting excessive skin dryness, while diosmin works to
strengthens vascular walls and prevents breaking and damage.

But that’s not all; this Pharmaceris face cream also boasts a calming effect as D-panthenol works to ensure that your skin is less prone to hypersensitivity reactions. To complete the mix, emollient olive wax nourishes and moisturises the complexion. At the same time, shea butter mimics the skin’s natural protective lipid barrier to effectively soothe and nourish the skin, controlling erythema and preventing new capillary problems.

The yellow-tinted face cream has a lightweight lotion-like cream texture that glides over and melts into your skin easily. As soon as you smooth it over your skin, you can feel how soothing it is; I don’t typically have redness-prone skin, but I worked this into my face and neck when I was struggling with a slightly irritated area on my neck and it instantly felt cool and calm – oh, and did I mention that it makes a great base for makeup?

The Pharmaceris N face cream has a very subtle and refreshing aroma that lasts a few seconds after application but isn’t noticeable once the cream has sunk into your skin.

How Do You Use The Product?

Slip this into your dedicated Pharmaceris N skincare routine as you second step for the best results. After cleansing, apply the cream to your face and neck in the morning and evening.

What’s Special About The Design?

The daily moisturiser is housed in a pump bottle that is quick and easy to use; simply dispense a pump or so onto the tip of your fingers. It has a more traditionally medical look that reflects Pharmaceris’ pharmaceutical heritage, whilst its strip of red ties it into the rest of the N range.

This entry was posted on Monday, April 11th, 2022 at 2:25 pm and is filed under Skincare. You can follow any responses to this entry through the RSS 2.0 feed. You can skip to the end and leave a response. Pinging is currently not allowed.

@escentual Trying to make it to January payday... #Valentino We have so much love for Kristen McMenamy and @MaisonValentino… https://t.co/Lr664ECUEn
23 hours, 28 minutes ago • reply • retweet • favourite