The 10 Best DIOR Beauty Icons You Need To Try

In just 70 years, the House of DIOR has become one of the most coveted couture fashion and premium beauty brands in the world. In that time, they’ve released a host of iconic pieces – from the classic Bar jacket from Christian Dior’s very first fashion show right through to the release of the now-globally-adored DIOR Sauvage fragrance in 2015. 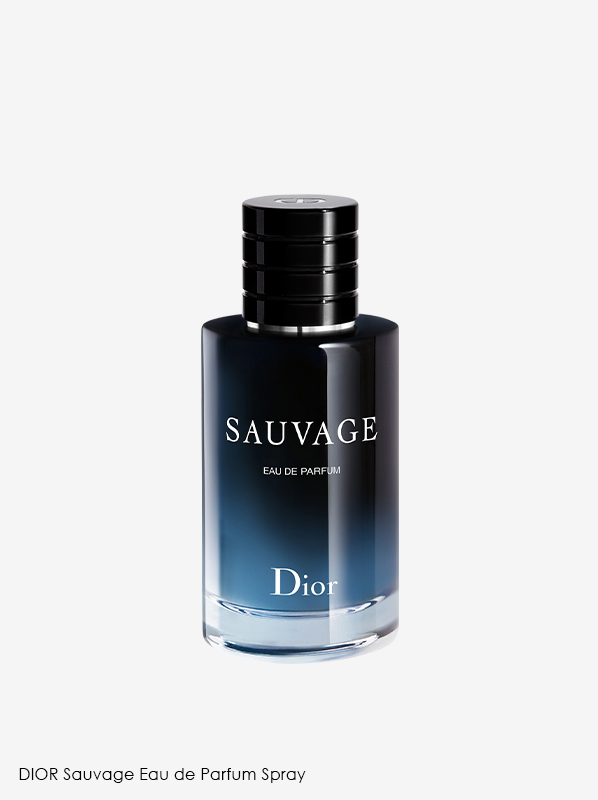 Why It’s An Icon: First launched in 2015, DIOR Sauvage is one of the most well-loved men’s fragrances; in fact, competitors often see it as the scent to beat. The expert behind the fragrance is François Demachy, who drew inspiration from the desert at the twilight hour, pairing the coolness of the night with the searing heat of the desert.

And these notes deserve the best treatment, which DIOR delivers; the delicious vanilla accord is processed using an innovative extraction method to restore the complex power of its aroma as it’s harvested green and then scalded. It diffuses beautifully throughout a woody-amber base.

A Review of Dior Sauvage 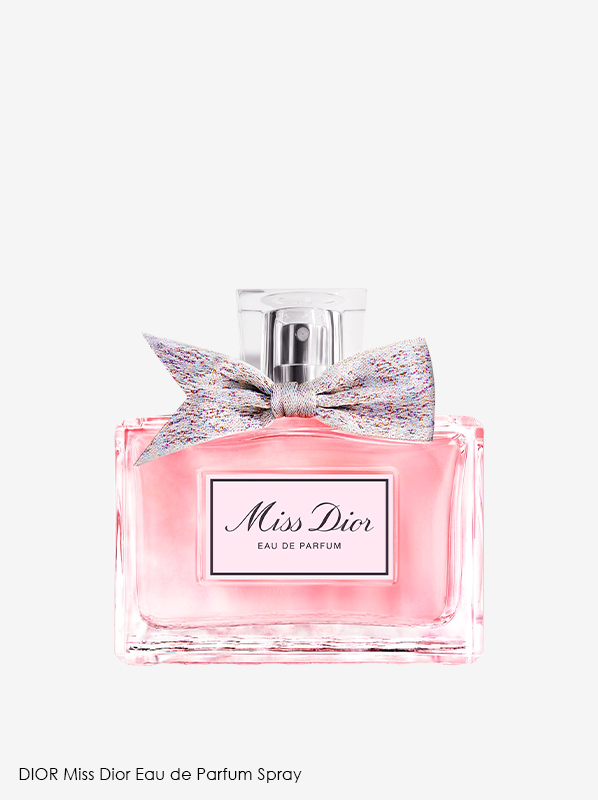 Why It’s An Icon: As fragrances go, Miss Dior has a pretty complicated history – but we’ll forgive her because she’s such an icon.

A ‘Miss Dior’ was technically first launched in 1947, when a heavy chypre fragrance with this name first joined the market. This variation, though, would eventually be renamed ‘Miss Dior Originale’ in 2011. In 2005, we saw the launch of the soon-to-be-beloved Miss Dior Cherie, which was once the fifth best-selling fragrance in the world. The fragrance was reformulated in 2012, though, and became simply ‘Miss Dior’ as Natalie Portman became the face of the perfume.

And like any true icon deserves, Miss Dior can rebrand herself throughout her life; the classic fragrance was reformulated in 2017 to offer a rose-patchouli rendition before being revamped again in 2021 – was awarded the Best Floral Scent during the Glamour beauty award in the same year. Today, Miss Dior is far from the ’47 original, blending delicate florals with soft musks, vanilla and wood. 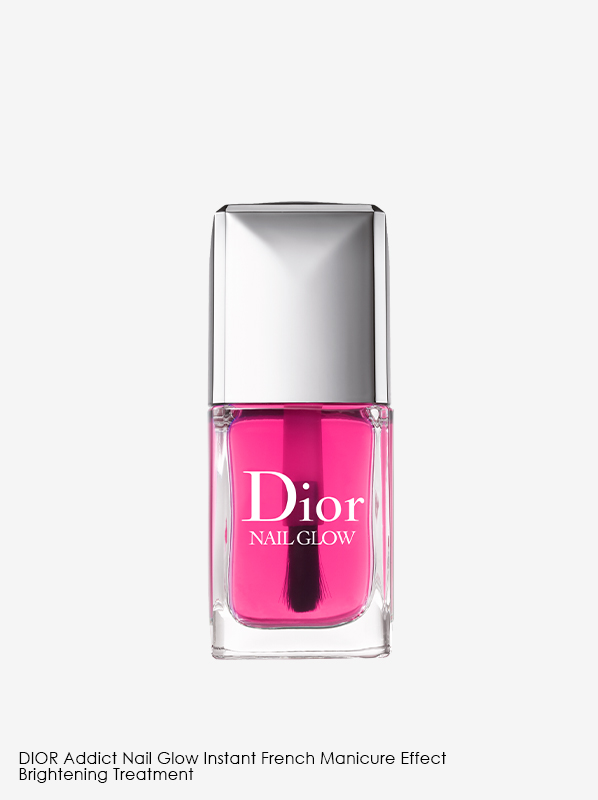 Why It’s An Icon: Nothing captures Parisian chic quite like a French manicure. That said, we don’t always have the time or the money to keep a French manicure going around the clock. And it’s for this reason that the DIOR Addict Nail Glow Treatment continues to prove so popular; it gives that French mani look from the comfort of your own home. Designed to reveal the natural beauty of your nails, it makes the pink of your nails pinker, while brightening your nail tips for an instant French manicure. 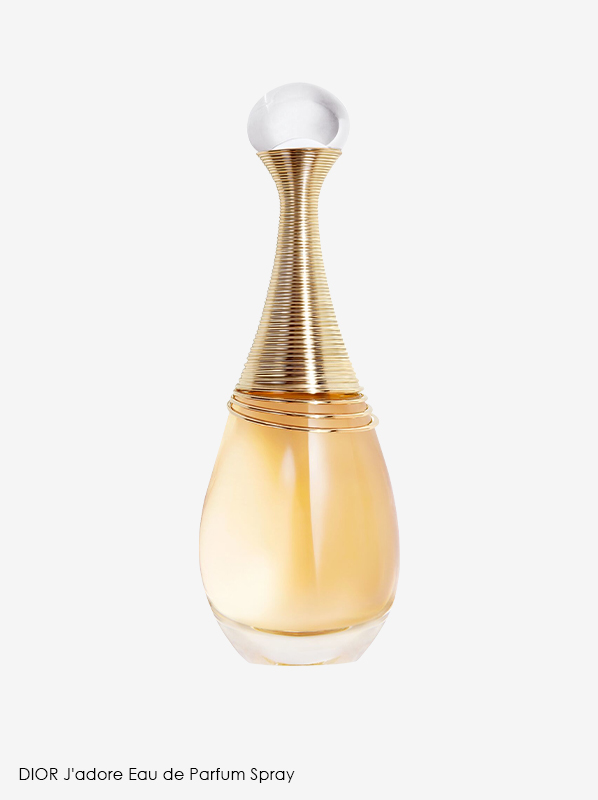 Why It’s An Icon: At this point, I’m not sure what’s more iconic: the DIOR J’adore fragrance or the campaign behind it, which features actor Charlize Theron bathing in pure gold.

Finely crafted to the last detail, J’adore is no ordinary floral fragrance. It’s packed with some of the most luxurious petals from around the globe. This includes the likes of ylang-ylang, a unique, almost creamy exotic floral note. The show’s stars have to be the essence of Damascus rose and a rare duo of Jasmine Grandiflorum from Grasse – the home of modern perfumery – and Indian Jasmine Sambac. The result? A full-bodied floral perfume that exudes luxury.

And I couldn’t talk about J’adore without mentioning that bottle. It mirrors the sensual curves of the legendary amphora created by Christian Dior but is adorned with the famous Maasai necklace.

5. The Lip Balm That Goes The Extra Mile 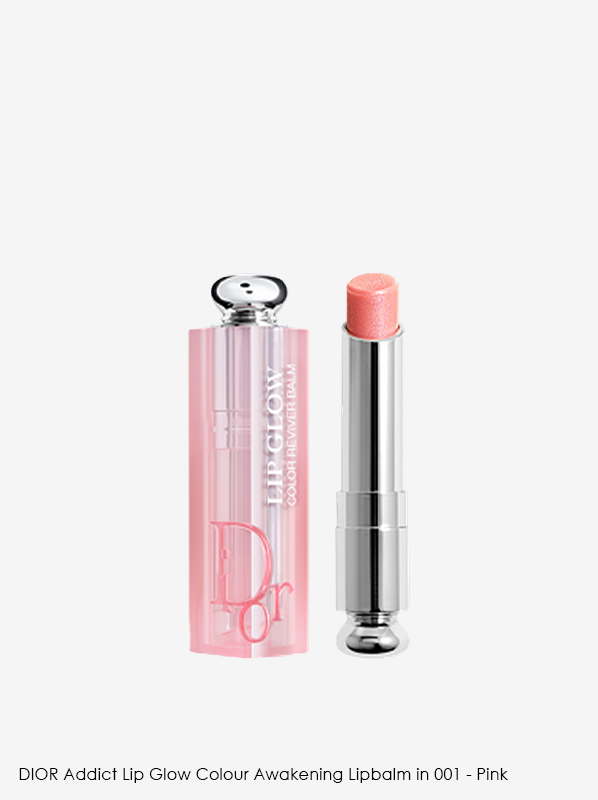 Why It’s An Icon: A revolutionary beauty icon and a cult-classic, Addict Lip Glow has to be the best DIOR lip balm around. It’s also the first of their lip balm’s to be formulated with 97% natural-origin ingredients. It delivers a light kiss of colour that suits your skin tone without ever looking overdone. It does so thanks to Colour Reviver Technology, which reacts with the moisture level of your lips to unveil a customised colour and a subtle shine, boosting your glow for six hours.

Gliding over the lips in an effortless and comfortable sweep of colour, Addict Lip Glow also hydrates the lips for 24 hours. It’s laced with cherry oil to strengthen the skin barrier function of the lips over the course of applications. You’ll also find that your pout will feel nourished and comforted due to the addition of a nourishing oil with a composition similar to that of the lipids in the skin of your lips. As if that wasn’t enough, DIOR also adds softening shea butter alongside sunflower and rice waxes for a skin-caring lip balm with a sturdy balm texture that makes it quick and easy to apply just the right amount of lip care. 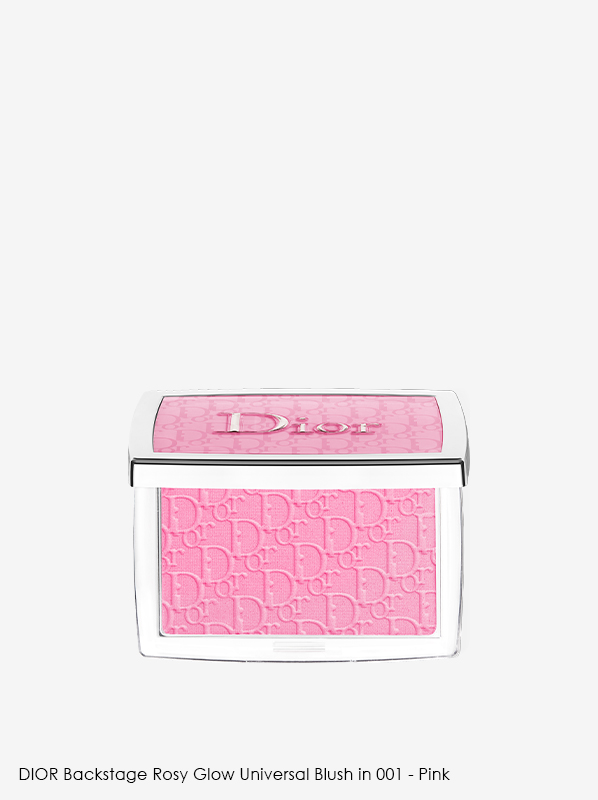 Why It’s An Icon: I know just how much of a popular Dior beauty icon the Backstage Blush is just based on the number of times I see it across social. Or, equally, the number of times we get asked when the DIOR Rosy Glow Blush will be back in stock! It’s often viewed as the best DIOR blusher out there.

If you’re unfamiliar with this icon, let me tell you all about it. The thing that sets the Backstage blusher apart from the rest is the fact that – as the name suggests – it’s universal. That’s right; this is a pink blush for all skin tones. Adding a buildable pop of pink, it’s the one product that Dior makeup artists turn to when they want to create fresh, rosy cheeks that still look natural. Just like Addict Lip Glow, you’ll also find DIOR’s Colour Reviver tech in here, too, in order to deliver a customised rosy effect. Simply dust lightly across the tops of the cheekbones and watch your personalised pink shade appear. 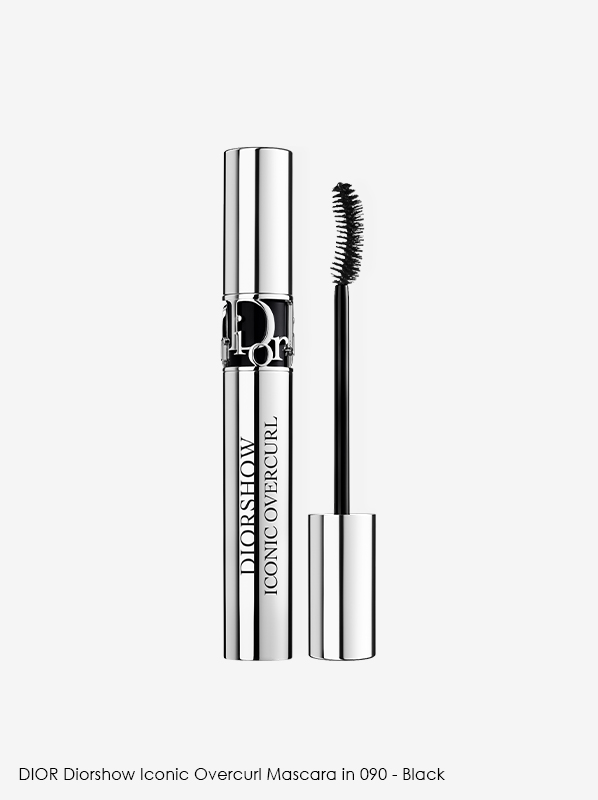 Why It’s An Icon: It’s not just me who thinks this is an icon; DIOR do too. That’s why it’s in the name.

This golden oldie is the best it’s ever been. The reformulated lash-lifter adds intense volume and curl no matter your lash type, adding definition and fanning out eyelashes for 24-hour wear. Enriched with cotton nectar that will soften and protect for stronger, shinier lashes, Diorshow is available in three different colours: black, blue or brown. Each mascara has a stripe of colour around it to indicate the shade within, which is great if you’ve got a few Diorshow mascaras knocking about in your handbag.

My favourite thing about the mascara? Just how easy it is to use. Its curved brush glides through to deliver longer-looking lashes and open up the eyes. If you press the brush against the upper lashes after, it also acts like a makeshift eyelash curler. 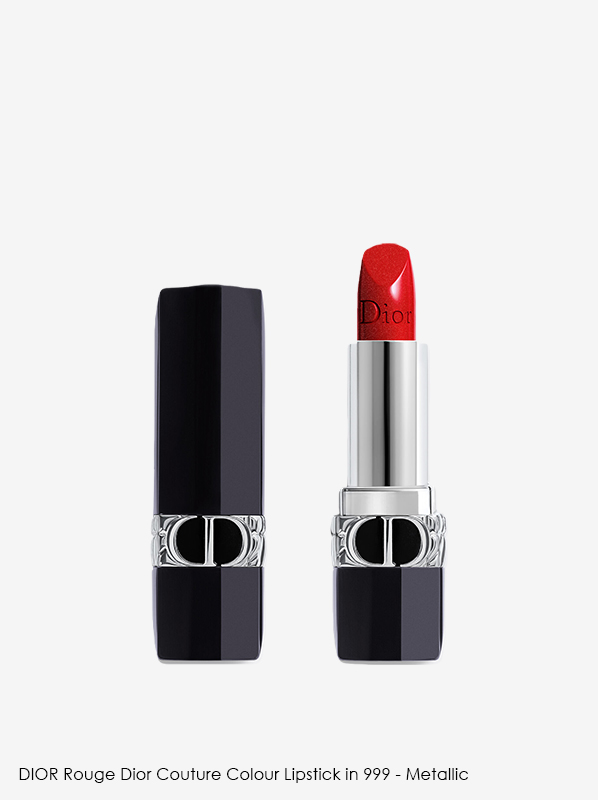 Why It’s An Icon: With Rouge Dior, couture care meet care. Available in an unbelievably (but completely necessary) wide range of shades – and in no less than four different finishes – the Rouge Dior lipstick is built around protective red peony – a favourite flower of house founder, Christian Dior – to enhance the hydration of your lips and the luminosity of the lipstick. Often deemed to be the best DIOR lipstick, the globally-adored lip colour also naturally boosts the softness and suppleness of your pout using pomegranate flower extract. This sits alongside nourishing shea butter for ultra-smoothing application. And with all of these skin-loving actives packed in, it’s no surprise that this leading lipstick offers 16 hours of comfort.

But just because this is an icon, that doesn’t mean it can’t be improved on. The new design for DIOR’s lippy features the classic CD initials as a nod to the House’s signature runway look of fitted waists. The best bit? It’s now refillable in a move to make luxury beauty more sustainable. 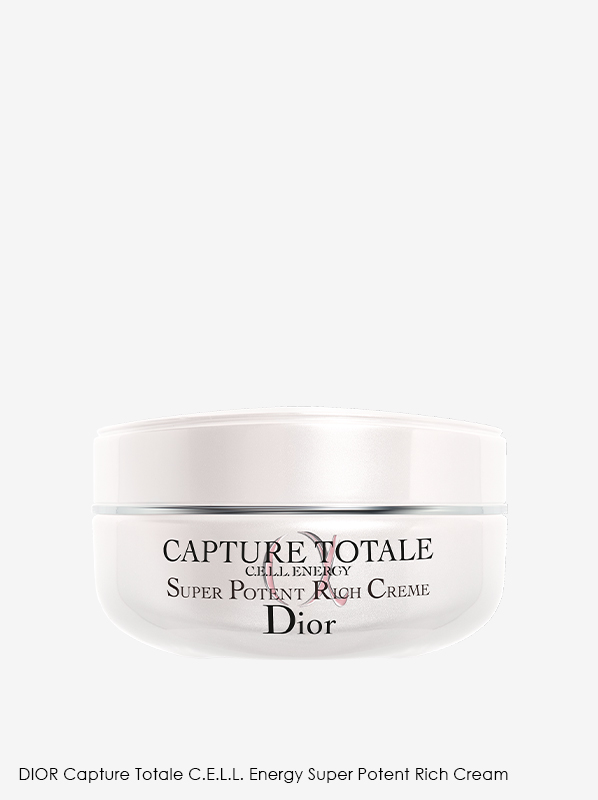 Why It’s An Icon: An award-winner and a best-seller, the Capture Totale Cream shows why DIOR are major players in the world of premium skincare. Through research, they’ve discovered that skin dryness tampers with the natural skin revitalisation process, which then plays a part in ageing. But that’s where the legendary Capture Totale Super Potent Rich Cream comes in.

All about skin revitalisation, the face cream combines clever bio-cellular tech with French peony oil to deliver just that: revitalisation. The result? Skin that glows with radiance, and appears younger and stronger too – we’re talking smooth, fortified and firm results.

Although there’s a lighter version of the C.E.L.L Cream, the rich version continues to prove the most popular here at Escentual. Its rich, emulsified cream texture deeply nourishes the skin without feeling greasy or heavy. 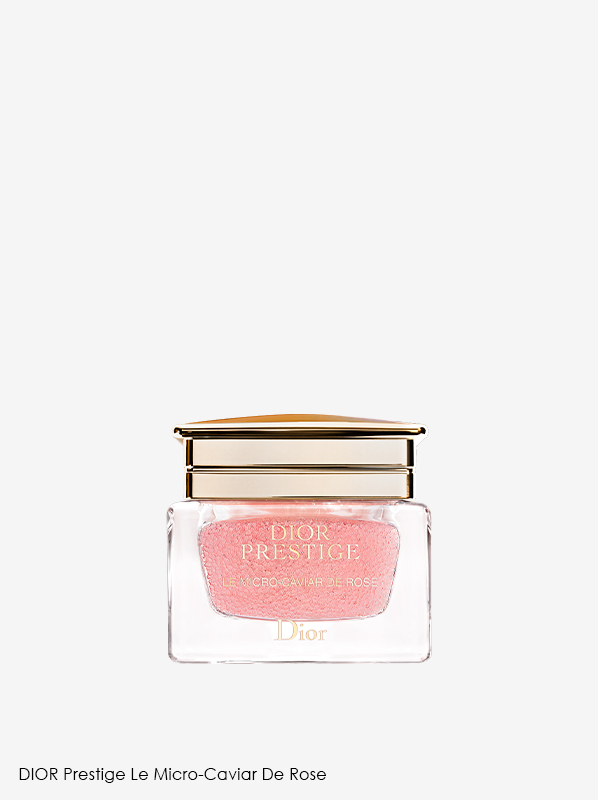 Why It’s An Icon: Any skincare that looks as good as Le Micro-Caviar deserves a slot in my line-up of the best DIOR beauty. These pretty pink pearls don’t just look good, though. They’re also a true innovation. In fact, they’re said to be the first regenerating micro-nutritive concentrate with a unique caviar texture.

But what’s the purpose of these pearls? They wake up the skin’s natural regeneration process after damaging environmental factors have wreaked havoc on it. Following a study, Dior Science acknowledges that pollution and change can leave your skin feeling a little worse for wear, resulting in the skin’s ability to regenerate itself as effectively. But these tiny treasures restore and revive tired skin using 22 repairing nutrients from Rose de Granville for plump, soothed and hydrated skin. The thing that really sets Prestige Le Micro-Caviar De Rose apart is the ground-breaking microencapsulation tech behind it. Through unique cosmetic expertise, 17,000 micro-pearls have been individually crafted without a membrane. Why’s that important? Because it allows each pearl to delicately melt onto the skin.

The History of DIOR

Lots of people commented on how healthy and shiny my nails looked.

This entry was posted on Tuesday, August 2nd, 2022 at 8:00 am and is filed under Luxury Beauty Icons. You can follow any responses to this entry through the RSS 2.0 feed. You can skip to the end and leave a response. Pinging is currently not allowed.

@escentual Trying to make it to January payday... #Valentino We have so much love for Kristen McMenamy and @MaisonValentino… https://t.co/Lr664ECUEn
2 days, 17 hours ago • reply • retweet • favourite