The History of DIOR 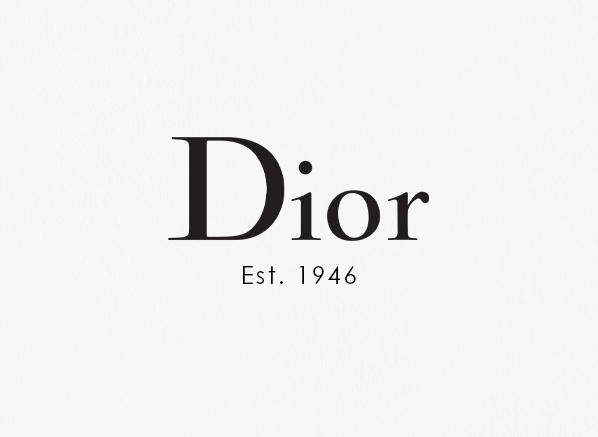 For the second edit in my history of premium beauty brands, I’ll cover the rich history of DIOR. This luxury fashion house has transformed the clothing, fragrance and beauty industry beyond measure.

DIOR’s heritage is not yet one hundred years old. But, as the life of Christian Dior shows, you don’t need a century to make your mark on the world; in fact, Christian Dior personally managed to shape the fashion industry in just one decade with his couture house. Keep reading to uncover how he did just that as we delve into the history of DIOR… 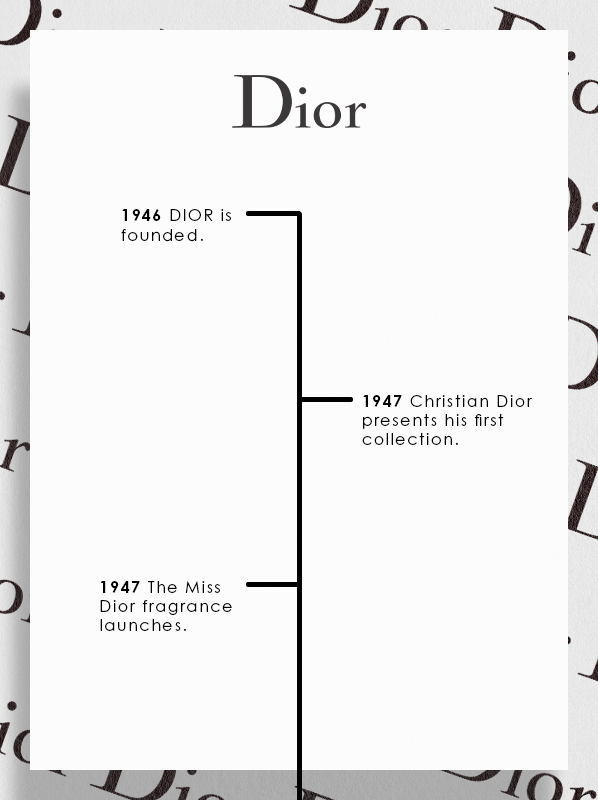 French-born designer, Christian Dior, founded DIOR in October1946. By this point, Dior was 41 years old and had gained invaluable experience in the arts; for a while, he ran an art gallery in Paris before training as a dress designer at Lucien Lelong.

But the story behind the formation of DIOR is nothing short of magical. Christian Dior was set to meet with Marcel Boussac (who wanted to ask Christan Dior to become Artistic Director for the fashion house Philippe et Gaston). However, the evening before their meeting, Christian Dior quite literally stumbled upon a star in the street. Dior was known to be very superstitious, so he took this star-shaped object as a sign to turn down Boussac’s offer and follow an exciting new path, not with Philippe et Gaston, but with his very own fashion house.

After the horrors of war, Christian Dior had one life’s ambition: to allow women to rediscover joy, elegance and beauty. And just a few months after the luxury fashion house was founded, his dream would become a reality. Dior presented his first collection on the 2nd of February 1947 at DIOR’s headquarters on 30 Avenue Montaigne, Paris. The Bar jacket was deemed the star of the show. Seemingly moulded to the woman’s body, this piece epitomised Dior’s developing style; it veered away from practical yet restrictive wartime fashion to celebrate the natural curves of the female body.

Dior’s influences were apparent throughout his first show: his childhood, flowers, colour and art, all of which have built the legacy of the House of DIOR over the years. And it’s fair to say that the show was an instant success. The editor-in-chief of Harper’s Bazaar exclaimed, “It’s quite a revolution, dear Christian! Your dresses have such a new look!” From this point on, DIOR would become synonymous with a new fashion style. His very-first collection would forever be referred to as the ‘New Look’.

But 1947 was a big year for another reason. The fashion house’s first-ever fragrance, Miss Dior, was launched and dedicated to his sister, Catherine. This early fragrance is a world away from the Miss Dior you get today (the closest thing you’ll get to the original scent is now known as Miss Dior Originale).

Just one year later, DIOR took over New York City; its stores opened on both Fifth Avenue and 57th Street. By the end of the decade, the fashion house’s success had skyrocketed; it’s estimated that DIOR fashions made up 75% of Paris’s fashion exports and 5% of France’s total export revenue. 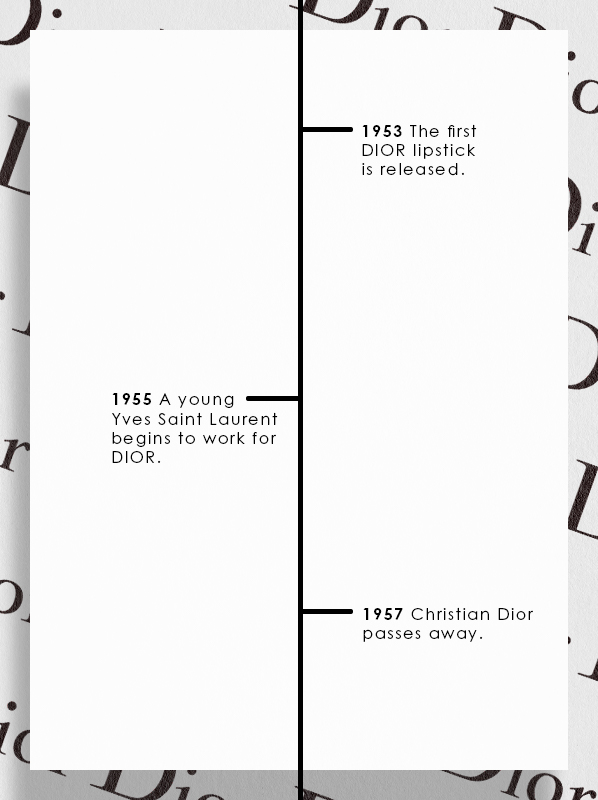 In 1950, Christian Dior became the exclusive designer for Marlene Dietrich in the Alfred Hitchcock film, Stage Fright. The following year, Christian Dior conquered yet another element of the arts by releasing his first book, Je Suis Couturier (translating to ‘I am a Couturier’).

Clothes and fragrance, it seems, weren’t enough for this luxury fashion house. In 1955, the first DIOR lipstick was also released as the couture fashion house ventured into the world of luxury makeup for the very first time – much to its fans’ delight! The first DIOR shoe line was launched in the same year with Roger Vivier’s aid, further establishing the brand’s fashion empire just before the first DIOR boutique was established in 1954 at 9 Conduit Street.

By this point, Christian Dior was well and truly rubbing shoulders with royalty; in honour of Princess Margaret and the Duchess of Marlborough, a Dior fashion show was held at Blenheim Palace in 1954.

The following year, DIOR began working with a young Yves Saint Laurent, who was just 19 years old. Although the young Saint Laurent started work as a Dior’s assistant, it was evident that he was made for stardom; it’s said that, just two years later, Dior met with Saint Laurent’s mother to inform her that he’d been chosen as Dior’s successor when the time came. I can only imagine what an exciting time this must have been for the young YSL, especially as DIOR designed a white satin bustier dress for the engagement of soon-to-be-Princess of Monaco, Grace Kelly, just one year later in 1956.

In 57, Christian Dior appeared on the cover of TIME as part of a high fashion feature – the first-ever couturier to ever do so. This was reflected on the mark he made on the world; he wasn’t an unnamed designer who hid away behind reams of fabric: he was a household name.

Unfortunately, the beloved designer died shortly after the feature’s release, following a heart attack on 24 October 1957. He was just 52 years of age. The world mourned the loss of a creative genius who remains one of the greatest fashion figures of all time. 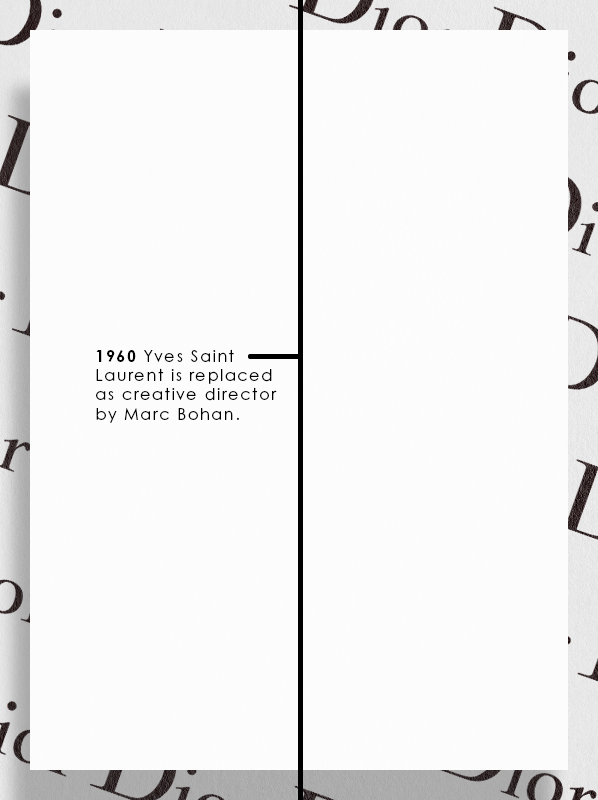 As DIOR welcomed in a new decade without their founder at the helm, the 60s marked a time of change for the brand – and the world of fashion. Although Yves Saint Laurent’s creative flare is impossible to deny, his collections for DIOR didn’t always prove to be a sure-fire success because he made alterations to Christian Dior’s signature style. He began to prioritise comfort by loosening the cinched waists and relaxing the structure of the designs that the house was known for. As a result, when he was called to serve in the French army in 1960, it was a natural opportunity for YSL to step down as DIOR artistic director.

Marc Bohan – a designer for DIOR since ‘58 – replaced Saint Laurent as Creative Director in 1960, and he would go on to hold this position for nearly three decades. He stuck to Christian Dior’s original style more closely while updating it for the 60s. During this era, the fashion house dressed a range of A-listers under Bohan’s guidance: in fact, Elizabeth Taylor rocked up to the Oscars in a DIOR number as she claimed Best Actress for her role in Butterfield 8. 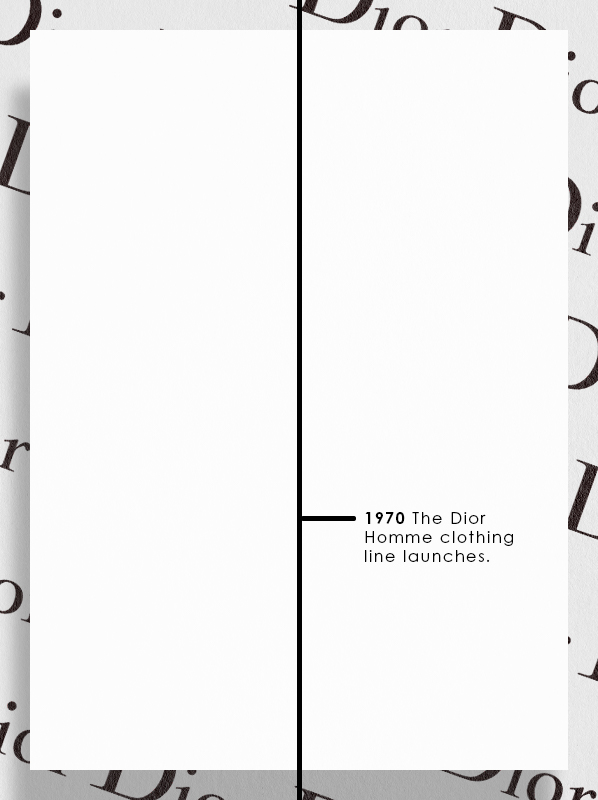 In 1970, the first-ever Dior Homme clothing line was launched. 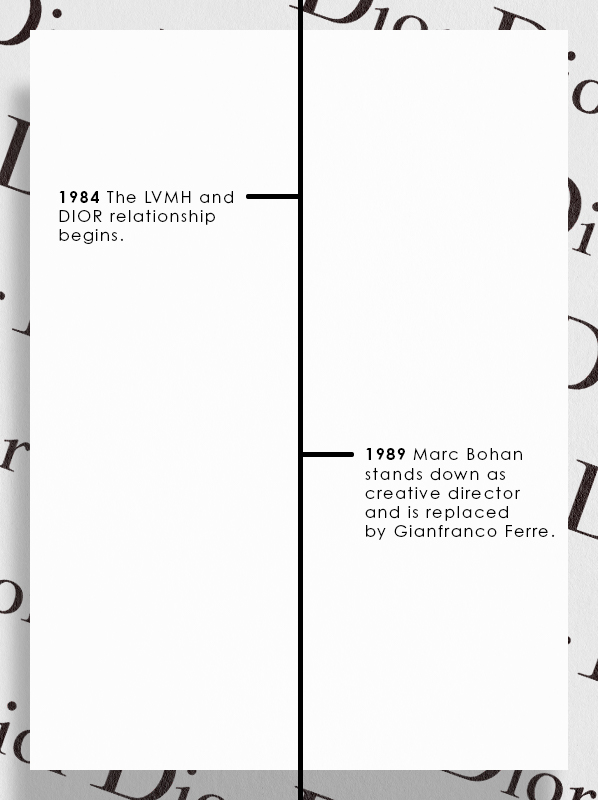 In 1984, the relationship between the House of DIOR and LVMH began. Bernard Arnault, the billionaire behind LVMH (if you read my piece on the history of GIVENCHY, you’ll know him as the owner of that fashion house, too), struck a deal with Boussac, a textile group that included DIOR. From this point, LVMH owned an estimated 75% of DIOR’s business. From this point, Arnault took over as chairman, CEO and Managing Director but still ensured that the heritage and history of DIOR was maintained.

When Bohan stood down as creative director in 1989, Gianfranco Ferre became Stylistic Director and began to branch out into haute couture.

1990s: DIOR Gets The Royal Seal Of Approval… 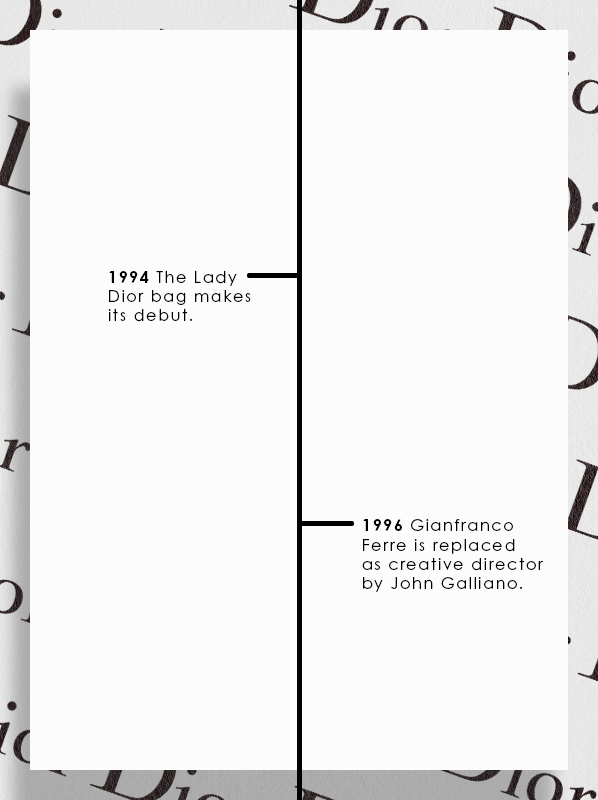 An iconic piece in DIOR’s collection – later dubbed the Lady DIOR bag – made its debut in 1994, but it wouldn’t gain its nickname until the following year. Its status was confirmed when Princess Diana was gifted the bag by France’s First Lady, Bernadette Chirac – it would become one of Lady Diana’s go-to pieces.

The DIOR 1997 Spring collection was Ferre’s swan song as Creative Director; he was replaced by John Galliano, following a move from GIVENCHY, in the October of 1996, but his pieces took to the stage one final time in the spring. 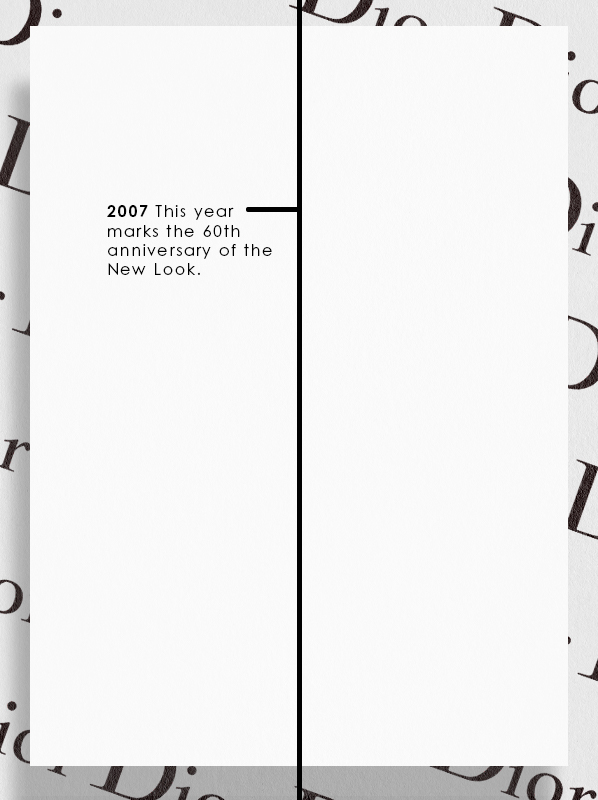 The DIOR Homme boutique on 30 Avenue Montaigne reopened with a new masculine concept, led by Hedi Slimane as the Creative Director for the menswear division until Kris Van Assche took hold of the reins in 2007.

For the 60th anniversary of the New Look in 2007, John Galliano paid homage to the collection for DIOR’s Spring-Summer collection whilst drawing upon Japanese culture. 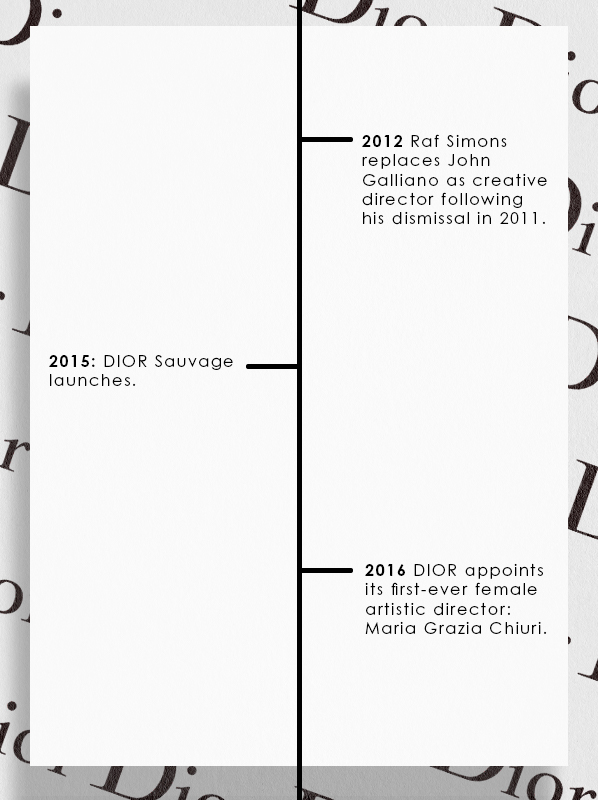 Raf Simons took over as creative director in 2012 after Galliano’s dismissal in 2011 following anti-Semitic remarks. Simons’ first collection was well-received as he returned to the classic ‘DIOR’ style, drawing upon 50s fashion and revisiting the iconic Bar jacket from the New Look. This year, Simons was awarded ‘The Dress of the Year’ by the Bath Fashion Museum for one of his pieces, which took a 50s style DIOR dress, cut it to tunic length and paired it with a fitted black dress to reflect the changing nature of women’s fashion.

2015 was a big year for DIOR, but outside of the fashion world – DIOR Sauvage launched. It’s recently been named as the best-selling men’s scent worldwide.

Whilst celebrating the 70th anniversary of Christion Dior’s first collection in 2016, DIOR appointed its first-ever female Artistic Director: Maria Grazia Chiuri, a title she holds today. With Fendi and Valentino under her belt, Chiuri has proved to be a huge success for the fashion house. Not only is her aim to continue the legacy of Christian Dior, but to go beyond that to create fashionable pieces for the modern woman whilst using her platform to promote female empowerment. This ambition is reflected in her iconic slogan T-shirt declaring ‘WE SHOULD ALL BE FEMINISTS’ (yes, we should), another DIOR piece to be awarded Bath Fashion Museum’s Dress of the Year.

The following year, luxury conglomerate, LVMH, took on full control and ownership of DIOR in a hefty $13.1 billion deal. By this point, LVMH already owned Parfums Christian Dior, but this deal meant that they now own Christian Dior haute couture, leather, men’s and women’s ready-to-wear collections, and shoe lines.

In 2018, Pietro Beccari took over as CEO, while Kim Jones has served as Creative Director of the male faction since 2019. Jones’ suit was one of two pieces to make up the 2018 Dress of the Year, which challenged gender stereotypes through a pink suit that comprised bold diagonal lines as a nod to DIOR’s Autumn/Winter Oblique Collection, while the other half to claim the award was a blue flock coat for women – based on historical menswear – created by Nicolas Ghesquière for Louis Vuitton. 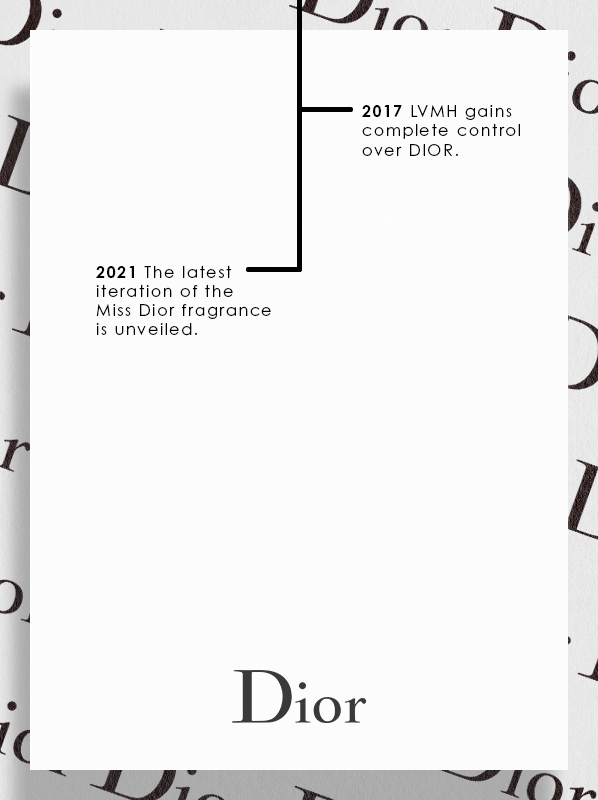 DIOR was one of the brands to lead the switch towards live-streamed runways due to the pandemic.

In 2021, DIOR also unveiled yet another revamp of their iconic Miss Dior fragrance, with Natalie Portman continuing as the face of the fragrance. The latest update saw the introduction of a lily of the valley note, which nods to Christian Dior’s childhood all these years later. He used to spend hours roaming the garden of his family home in Granville, which blossomed with the plant that would later become his lucky charms, worn in his buttonhole or sewn into the hems of his haute couture designs from his early days.

Do you have a question about the history of DIOR that we haven’t answered? Tweet us @Escentual with your query!

The 10 Best DIOR Beauty Icons You Need To Try

This entry was posted on Monday, August 1st, 2022 at 8:00 am and is filed under History. You can follow any responses to this entry through the RSS 2.0 feed. You can skip to the end and leave a response. Pinging is currently not allowed.

@escentual Trying to make it to January payday... #Valentino We have so much love for Kristen McMenamy and @MaisonValentino… https://t.co/Lr664ECUEn
2 days, 17 hours ago • reply • retweet • favourite