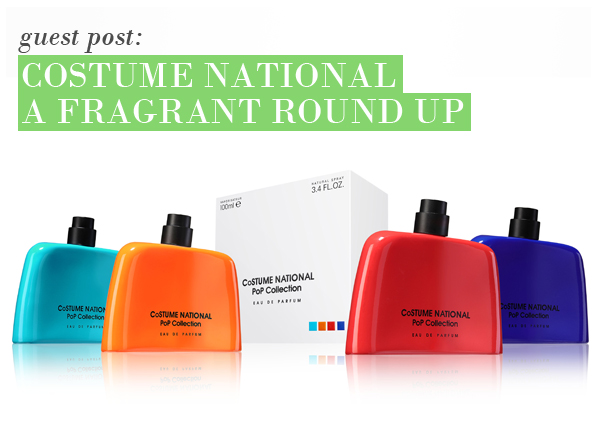 In 2004, almost in response to the unisex comments to the original Scent trio, Costume National released Scent Gloss. This was almost the complete olfactive opposite of the previous trio with its pink bottle and juice and a beautiful rose centred fragrance. Ultra pink, ultra floral, ultra feminine! A year later a more sheer version was released called Scent Cool Gloss, this is billed as the sparkling version of Scent Gloss and yet another ultra feminine fragrance.

With a touch of irony, in 2008 Costume National released 21. This time officially a unisex fragrance! This release was to celebrate 21st anniversary of the fashion house. This is a stunning fragrance composed of what is said to be Ennio’s favourite smells. A milky fragrance with orange blossom, saffron, woods, amber and musks.

Moving on to 2009 and the house’s most recent fragrance is Costume National Homme. This is pitched as an elegant, charming fragrance with notes of bergamot, cinnamon, thyme cloves and a base of patchouli, sandalwood and labdanum.

I’m eagerly waiting to see what the next olfactory expression from this house will be.

This entry was posted on Friday, July 30th, 2010 at 1:37 pm and is filed under Brand Focus, Fragrance, Guest bloggers. You can follow any responses to this entry through the RSS 2.0 feed. You can skip to the end and leave a response. Pinging is currently not allowed.