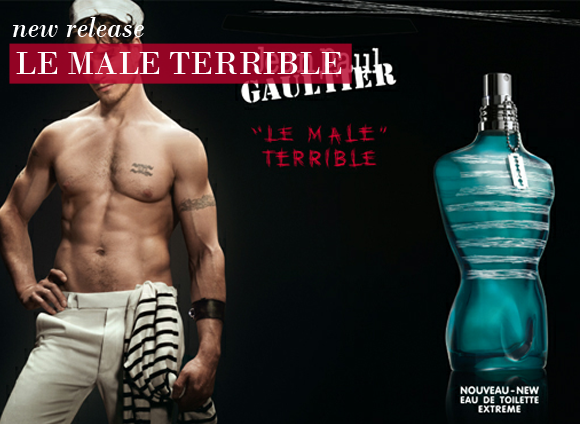 Inspired by the modern interpretation of a bad boy, Le Male Terrible is Le Male pushed to the extreme: he is dark, brooding, and intense, but always devastatingly charming. Defined by his bare torso covered in ink and etchings, his sailor’s jersey has been slashed by the same razor blade that hangs around his neck. He is disobedient, liberated and playful, and he’s about to become your new obsession.

A more intense interpretation of the iconic Le Male scent, this eau de toilette extreme explodes with a massive dose of freshness as grapefruit and pink pepper meet.

Infamous for smelling incredible on male skin, lavender (familiar as the middle note of the original Le Male) seduces the senses next. Finally, the sensuous base notes of vetiver, vanilla and ambery musk linger on the skin, leaving a thrilling reminder of Le Male Terrible.

A reworking of the original flacon, the new look Le Male Terrible features scrawling sailor’s stripes over the familiar blue torso, and includes a mini razor-shaped pendant hanging from the neck. The tin has a black, lacquered finish, with scratchy red lettering lamenting the name ‘Le Male Terrible’.

This entry was posted on Wednesday, August 18th, 2010 at 2:40 pm and is filed under Fragrance, Men, New products. You can follow any responses to this entry through the RSS 2.0 feed. You can skip to the end and leave a response. Pinging is currently not allowed.

@escentual @rgntparkschool Our pleasure! Thank you for spreading the message about the importance of wearing sunscreen 😊
1 day, 2 hours ago • reply • retweet • favourite

@escentual @thesniffwebsite Thank you so much for your support! It means the world❤️
1 day, 2 hours ago • reply • retweet • favourite