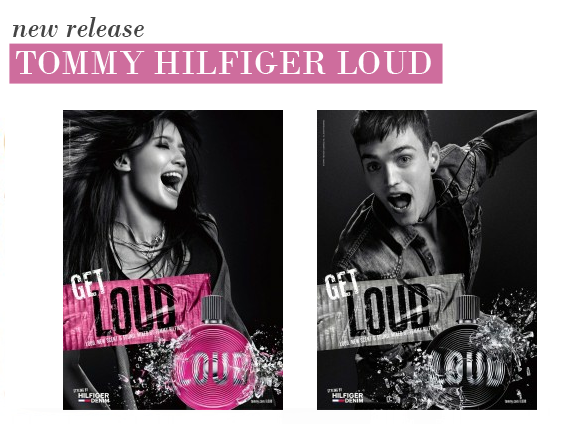 The Tommy Hilfiger brand sheds its wholesome, all-American image for one of the most explosive fragrance releases of the year – LOUD, the arresting duo of scents for him and for her.

Distorted, reverberating and amped on adrenaline, these are the scents of the electric generation – those whose lives are filled with danger, exhilaration, and a fixation with rock. They are a saturation of sound, colour, and movement that is as unpredictable and life affirming as music itself.

LOUD isn’t a fragrance that simply claims rock and roll inspiration – it has been inspired, developed and promoted by musicians and music lovers every step of the way. British Grammy-nominated group the Ting Tings created the exclusive song “We’re Not The Same” especially for the advertisement campaign and had a hand in the finalisation of the scent itself. Model and rock star offspring Daisy Lowe heads up campaign as the face of the female LOUD fragrance, whilst model and musician Josh Beech fronts the men’s scent.

The hottest new talents in the world of advertising, perfume, design and photography collaborated for over a year to create the olfactory essence of a pulsating, energetic rock song blaring from the speakers at a wild and unforgettable gig, all in the name of generating a credible and authentic rock and roll scent. Original and inspired, the youthful creation of the fragrance sets it apart as one of the most exciting launches for Christmas.

Though the fragrance is LOUD by name, the juice isn’t in-your-face and obnoxious – like its wearer, it is unpredictable, edgy and nonconformist. Each scent is based around the heady notes of patchouli and rose, though where LOUD for him is deepened with a sultry and smoky tobacco base note, LOUD for her is brightened with the delicate, sweet top note of lychee. They are uninhibited, arresting and bold, discovering the world in unprecedented ways.

The flacons are inspired by the ultimate iconographic representation of music: the vinyl. The glass is embossed with concentric circles reminiscent of the beat of a speaker, and the lids resemble the dials of a record player, metallic and scored.

Crave these new scents? Check them out here: LOUD for Him, and LOUD for Her.

bought this for my friend as a little extra, due to price and she loved it, one of her favourite perfumes now

This entry was posted on Wednesday, September 1st, 2010 at 8:24 am and is filed under Fragrance, Men, New products. You can follow any responses to this entry through the RSS 2.0 feed. You can skip to the end and leave a response. Pinging is currently not allowed.