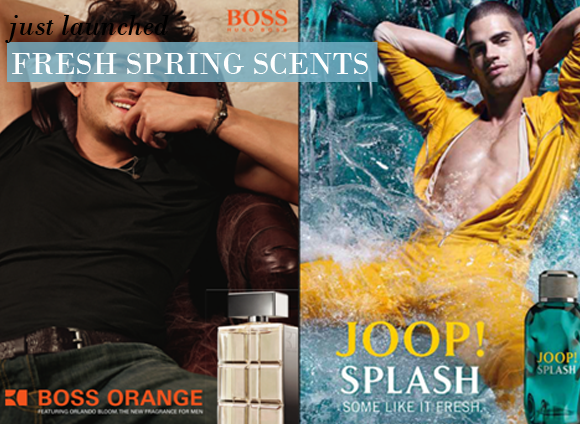 After harping on about women’s fragrances for a while, I’ve decided it’s time to shine a spotlight on some of the latest offerings for men.

The newest scents from fragrance heavyweights Joop and Hugo Boss are a surprisingly contrasting pair: one watery and fresh, the other warming and woody. They’re both fantastic transitional scents that are perfect for this time of year, as despite their inherent differences they’re both light and bright and extremely wearable.

So, enough with the vague descriptions – on to the detail!

Joop Splash
Joop Splash is like summer incarnate. I’m admittedly hard to please when it comes to fresh fragrances as they can often across as too harsh and metallic to my nose. However, Splash doesn’t fit that category. In fact, I’d say that it was less ‘fresh’ in the traditional sense, and more refreshing. A Woody Citrus scent with a vivid and surprising character.

The top note of Cassoway Fruit is blended with a crisp bite of Green Coriander. This is a surprisingly velvety opening that captures your imagination straight away with its almost vetiver-like density. It’s an almost hypnotic note and doesn’t contain even a glimpse of the sharpness or lightness like I expected from a fruity top note. I loved it straight away.

Before long, a flush of freshness is kick-started by an invigorating heart note of Calypsone and a spicy injection of Cardamom. It’s a spirited middle accord that develops on the skin really nicely, becoming increasingly warmer and woodier. A tinge of creamy sweetness lends an addictive quality to the scent that remains energetic right through to a timeless dry down of Cedarwood and Cistus.

The mottled glass bottle is incredibly ergonomic. It is reminiscent of a flow of water and finished in a green-blue hue that is refreshing in itself.

Boss Orange Man
Boss Orange Man is almost the antithesis to Joop Splash. If you like your scents warm, encompassing and comforting, then this one is more suited to you. I knew I’d love this scent as soon as I heard that it contained both vanilla and apple as predominant notes.

The scent is described by Boss as “spontaneous, passionate and energetic, yet casual and relaxed at the same time”. No mean feat for a scent to achieve all at once, but I do think that this designation does the scent justice. It’s definitely a casual and relaxed scent, yet the crisp kick of apple gives it a liveliness that prevents it from becoming over-indulgent. I can imagine this would smell particularly nice all warmed up on the skin after an hour or two, as the creamy Bubinga Wood note lends itself really well to the smoothness of the Vanilla and the spiciness of the Frankincense. This Wood note really is the heart of the creation, the anchor that binds all of the other notes together so well.

The bottle is a reworking of the Boss Orange for her bottle, a solid structure that represents the broad expanse of a man’s torso. The orange-tinged liquid is suspended inside the almost architectural flacon, framed in silver and finished in shaped glass. It is a simple design that is great for everyday usage, yet has a sophisticated, weighty feel.

This entry was posted on Tuesday, February 22nd, 2011 at 4:00 pm and is filed under Fragrance, Men. You can follow any responses to this entry through the RSS 2.0 feed. You can skip to the end and leave a response. Pinging is currently not allowed.