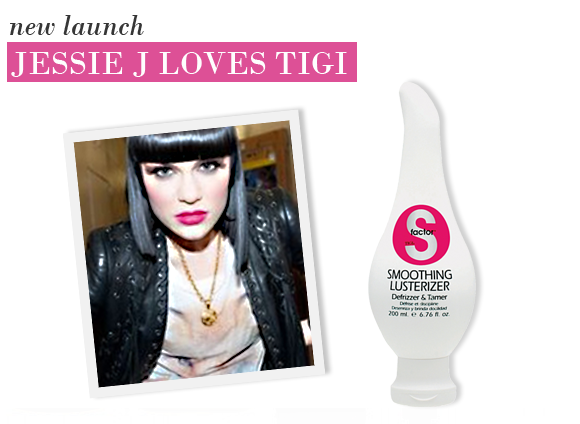 Jessie J is without a doubt the breakout music star of 2011 so far. With a Brits Critics Choice award, the BBC Sound of 2011 and a brand new album under her belt, she’s a superstar on the rise. While I can’t help you out with the singing voice or the enviable wardrobe, there’s one thing I can give you a heads up on – and that is the secret to her glossy, healthy hair.

During her recent stint in the BBC Live Lounge Jessie divulged that she keeps her hair in shape with the Tigi S-Factor Smoothing Lusterizer, a styling lotion that controls flyaways and locks in vital moisture. Her super-shiny black bob is kept sleek with humectants, whilst micro mica particles impart a dazzling shimmer.

I purchased this product, purely for the smell, its ace (smells just like strawberry yogurt). Having said that; it does a fair job as a smoothing product, non sticky and doesn't leave the hair greasy or feeling like 'product'; nothing outstanding, apart from the fragrance; but 'does what it says on the tin', as the quote goes

This entry was posted on Thursday, March 17th, 2011 at 2:28 pm and is filed under Haircare, Hints & Tips, Spotlight On. You can follow any responses to this entry through the RSS 2.0 feed. You can skip to the end and leave a response. Pinging is currently not allowed.

@escentual Need skincare advice? @filorga_uk training is currently happening on our Google hangouts. Have you got a question y… https://t.co/8bFmkJ7Gvq
1 hour, 19 minutes ago • reply • retweet • favourite

@escentual Today's #BeautyBreak topic is all about new habits. Whether they're weird or wonderful, share yours below!
6 hours, 3 minutes ago • reply • retweet • favourite

@escentual Google searches for 'hand cream' are the highest they've been in 5 years. Here are the ones we recommend for overwa… https://t.co/8ARzn6uviu
23 hours, 58 minutes ago • reply • retweet • favourite