Special Report: Testing out the Clarisonic Plus 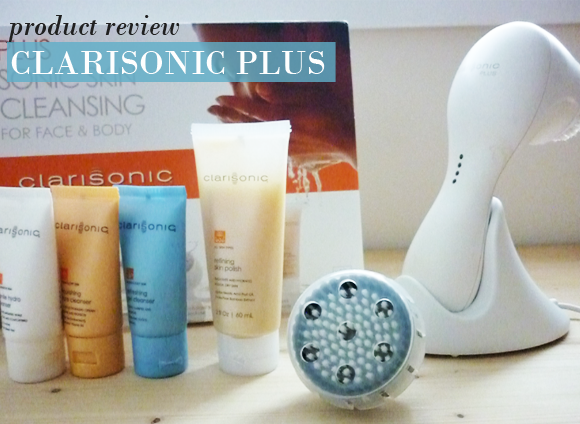 A monster review for my longest consistent product testing ever! This one’s all about the Clarisonic, that cult classic and all-round brilliant gadget for getting a really good deep-down cleanse. After bundling my Clarisonic Plus package home, I started up straight away…

Initial Judgements
The look and feel of the Clarisonic Plus really appeals to my inner gadget junkie – all smooth lines and clean, bright whiteness. The futuristic dock that the device sits in looks lovely nestled in amongst all of my other goodies, and the mind-boggling way that it charges the device without any obvious ports or hubs is so brilliant that I’ll admit that I spent an embarrassing amount of time just putting it in and taking it out just to see how on earth it was working (and also because I enjoyed the happy little beep it made far more than any person should). 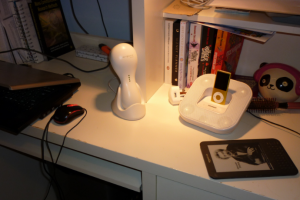 At first I was sceptical about having a mains charger rather than one with an electric razor socket. I thought that it would end up languishing in my bedroom next to my various chargers, and that I’d just plain forget to use it. Any thoughts of inconvenience flew out of the window once I witnessed just how long the device can go for without a charge – it’s pretty impressive! So much so, that I could just leave it dock-free in the bathroom for a couple of days. Also, as someone who is prone to accidents (and who thinks it’s a good idea to take a Kindle into the bath), its waterproof capabilities are the icing on the cake.

First Use:
Before using the Clarisonic Plus for the very first time, I dabbed a little bit of the Gentle Hydro Cleanser onto the dampened Plus brushhead, but with subsequent usage I found that the formulation goes a lot further if you work the cleanser into lather on your face first. There are only two buttons on the Clarisonic Plus (and only one for the Clarisonic Classic)- one for power on/off and one to increase the speed, so it’s brilliantly simple to use. The reason for the speed increase button on the Plus is for it’s dual usage as both a face and body cleanser. Keep it on the low speed setting for the face, and then up the pace when using the body brush head on the thighs, stomach and arms. I focused upon my facial skin, as that is what needed the most help.

The buzzing vibration of the brush initially surprised me, but it shouldn’t have – it uses the same sonic technology as a toothbrush, so of course it would sound like one too. I pressed the whizzing brush against my face with trepidation, but relaxed when I realised just how gentle the movement of the brush head is. I worked the device over a section of my face, and before long the clear beeps sounded telling me to move on. However as I’m someone who always thinks that they know best, I decided to wait for two sets of beeps before moving on. Eh, that was a mistake. The Clarisonic is a very effective exfoliator as well as a cleanser, and by keeping the brush on one part for too long I gave my skin a bit of a punishing. Thank goodness the brush is so gentle – the only adverse effect I had was a red face, but it taught me a valuable lesson. Don’t disobey the sonic technology!

Once my face was fully cleansed I applied my moisturiser as usual, and my fingers glided about my face effortlessly. It’s common knowledge that the complexion always benefits really well from a good exfoliation, but my skin had never felt as uniformly smooth as it did after that first going over. A very good sign! 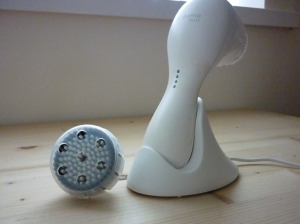 End of Week One:
The look, feel and texture of my skin is just brilliant this week – no more foundation sticking in my dry patches! A significant thing I learned after trying this was the effectiveness of the included Clarisonic cleansers. After washing my face with my other cleansers, I found that the brush head bristles eventually became a dull flesh colour that just refused to wash out thanks to my residual make-up. When I cleansed my face with the Refreshing Gel Cleanser the next day, the bristles became pure white again. I decided to stick to the Gel cleanser from then on, as I didn’t want any make-up dregs to linger on my face and clog up my pores.

This week my dehydrated/combination skin settled down significantly and became much more manageable. (ETA – I was recently told by a Vichy rep that I actually have a ‘normal’ skin type – what was I doing to my poor skin before?!)

End of Week Two:
This week I’ve decided that my skin has never looked so refined. I’ve even begun to use less and less make-up. Although, I have had to invest in a mattifying powder to keep my oiliness under control, which is a product I couldn’t even touch before due to the severity of my dry patches.

The increase in oiliness has lead to a few spots, but they’re nowhere near as horrible as my usual ones. I give them a little going over as part of my daily Clarisonic ritual, and they clear themselves up within a couple of days. 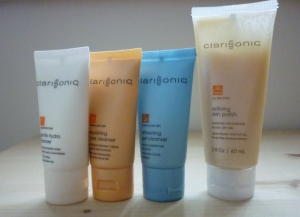 End of Week Three:
I’ve actually had a tonne of compliments this week about the clarity and smoothness of my skin. I’ve never had that before! I’ve been recommending the device left right and centre, and I’m thinking of getting more brush heads so that the rest of my family can use it. My skin is normally so irritable and dry in the mornings, but now all I do is give it a little going over with the Clarisonic and the Refreshing Gel Cleanser, smooth on a little La Roche-Posay Hydraphase Light Intensive Rehydrating Skincare and apply my make-up.

The Bottom line:
At first, I thought that the Clarisonic was just an extremely efficient exfoliator. After three weeks of use however, I can honestly say that my complexion has never been so smooth, even and cooperative. Although my facial skin is always pretty smooth overall, I get some extremely stubborn dry patches on my forehead and nose, and clogged pores between my eyebrows (I have a heavy fringe) and in the little dip between my bottom lip and my chin. The Clarisonic significantly reduced the appearance of these in about a week, and now I can go for much longer between uses without seeing signs of them returning.

I’d happily recommend this little beauty to everyone and anyone who will listen. It’s an investment buy, but the Clarisonic has had so much of an impact on the look and feel of my skin and the way that make-up sits on top of it that I no longer swap and change products. I’ve even done the unthinkable and have permanently switched to a foundation with much lighter coverage. It’s a modern day miracle.

Discover the entire Clarisonic range here, including my favourite products the Clarisonic Plus and the Refreshing Gel Cleanser here.

For more of a hands-on insight into the mechanics of the Clarisonic, take a look at this vid…

This entry was posted on Thursday, April 21st, 2011 at 8:00 am and is filed under Special Post, Tried & Tested. You can follow any responses to this entry through the RSS 2.0 feed. You can skip to the end and leave a response. Pinging is currently not allowed.