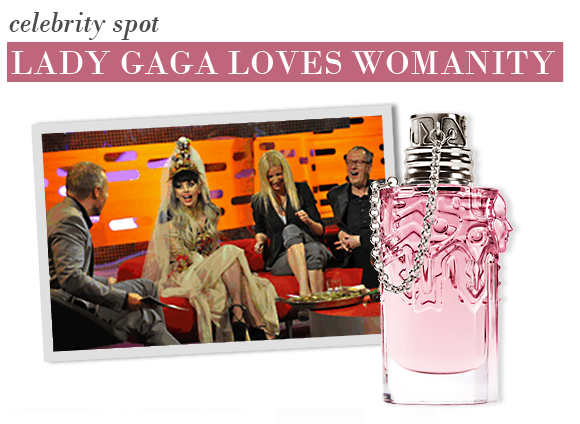 Ever wondered which fragrance Lady Gaga really wears? Set aside the speculation about Lady Gaga’s alleged semen-and-blood debut scent for a moment (check out Etat Libre d’Orange Secretions Magnifique instead!) and wonder no more, because the Queen of Glam Pop divulged her scent preference on the latest edition of the Graham Norton Show.

Lady Gaga appeared on the programme alongside superstar Gwyneth Paltrow, with whom she discussed her favourite perfume, Thierry Mugler Womanity. Gaga had apparently on a previous meeting with Paltrow,  bequeathed to her a bottle of the scent – after Gwyneth had asked what she was wearing because she “smelled so good”!

Womanity is a salty/sweet scent that smells incredibly unique, with a sweet, fresh fig accord as the top note, and a salty caviar note at its heart. Strange, surprising, and conspicuous – it’s like Lady Gaga bottled!

When you first try Womanity we definitely recommend you apply the fragrance directly to your skin and leave it a few hours before making a final decision. We weren’t too keen on first sniff, but after actually wearing it for a while – we were completely sold!

Don't understand what all the negative feedback is about. This fragrance is amazing. It is unlike anything you've ever smelled, guaranteed. I'll admit, it took some time to grow on me. When you first put it on, the scent is a little shocking, due to the strong metallic note. It does rather smell like a nosebleed. :) But as it dries, this fragrance evolves into a very soft floral aquatic scent. Imagine the way your hair smells after spending a day at the beach. It's a very salty fragrance, if that makes sense. Many have called this fragrance a masterwork and it truly is in my opinion. It's described by ELdO as smelling "astoundingly animalic and on others it will be almost childlike in its softness". This to me is 100 percent accurate. It definitely isn't for everyone, and I would suggest trying a sample before purchasing the full bottle, as it can be pretty costly. I wear it regularly and often receive compliments on it. Useful tip: try not to tell people what it's SUPPOSED to smell like. I think the problem is prior to smelling it, people already have a negative opinion about this fragrance planted in their minds. I expected a lot worse before smelling this cologne and it's now become one of my favourites. TRY IT!

This entry was posted on Thursday, May 19th, 2011 at 8:00 am and is filed under Fragrance, Spotlight On. You can follow any responses to this entry through the RSS 2.0 feed. You can skip to the end and leave a response. Pinging is currently not allowed.

@escentual Are you back in the office or #WFH? Either way, @candyperfumeb0y has found your ultimate workwear fragrance:… https://t.co/Bbiwhw5jQf
1 hour, 38 minutes ago • reply • retweet • favourite

@escentual We love a dewy finish.✨ So, we've created an edit with all our favourite dewy makeup products for anyone who wants… https://t.co/4GfAAYOLNx
18 hours, 38 minutes ago • reply • retweet • favourite

@escentual If you could create your perfect SPF, what features would it have?
1 day, 6 hours ago • reply • retweet • favourite