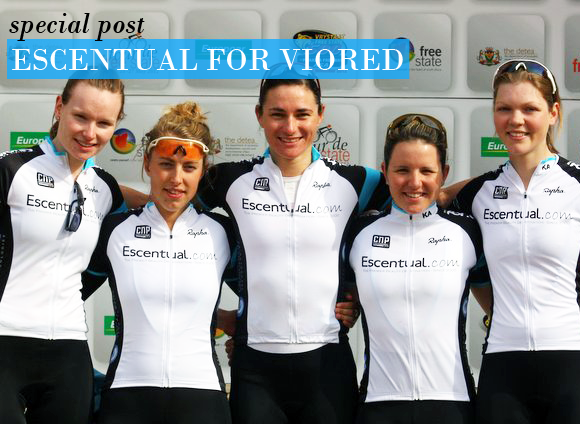 We love cycling – it’s a fantastic way to stay fit – and we are especially proud to be the new sponsor for the Escentual For VioRed Women’s Racing Team. Formed just two years ago, the team is focussed on developing young British and Commonwealth riders into professional cyclists (both on and off the bike), and offers an opportunity for riders to ride as part of a professionally run team. The team was initially formed as a grass roots development team with ambitions of doing well in local races, but has grown to be one of the UK’s best women’s cycling teams.

Team members include Ciara Horne, Ella Hopkins, Claire Galloway and the remarkable Sarah Storey OBE, who is gearing up for her sixth (yes, sixth!) Paralympics in London in August after competing in her first games aged just 14 in Barcelona in 1992.

Sarah was born without a functioning left hand after her arm became entangled in the umbilical cord in the womb. That hasn’t stopped her from becoming one of Great Britain’s most decorated and versatile athletes, having won World and Paralympic Gold medals across two sports (swimming and cycling) and across 11 very different events (6 in the pool and 5 on a bike). She has also won some of her gold as an able-bodied athlete and represented Team England at the 2010 Commonwealth Games in the Women’s Individual Pursuit – Great Britain’s first disabled athlete to do so.

Sarah is going for four gold medals at the Paralympics next month: 500m Time Trial, 3000m Individual Pursuit, the Road Race and the Road Time Trial. Given that Sarah is the current world champion in ALL of these events, we have high hopes that we will see her on the medal podium. Her first event is on August 30.

Sarah, who is married to the cyclist Barney Storey OBE, said: “It is every athlete’s dream to have the Olympics in your home country. I can’t wait for it to start.”

Good luck, Sarah, and all our Paralympians! We’ll all be rooting for you in London.

This entry was posted on Wednesday, July 4th, 2012 at 9:00 am and is filed under Special Post. You can follow any responses to this entry through the RSS 2.0 feed. You can skip to the end and leave a response. Pinging is currently not allowed.

@escentual Kick off the Christmas party season with great hair and makeup! Choose your Christmas party look with the help of u… https://t.co/wDbqQGyKbL
19 hours, 34 minutes ago • reply • retweet • favourite

@escentual How are you going to wear your hair for the Christmas party season?🥳
21 hours, 53 minutes ago • reply • retweet • favourite

@escentual Do you ever wear a particular perfume because it makes you feel a certain way? We certainly do! And we thought we'd… https://t.co/nnkFkKFwpp
6 days, 5 hours ago • reply • retweet • favourite