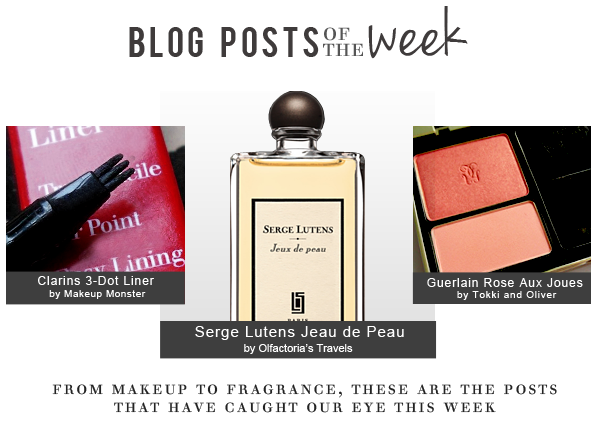 A River Runs Through It – Review: Serge Lutens Jeux de Peau at Olfactoria’s Travels
A thoughtful, balanced review of a the inimitable Serge Lutens Jeux de Peau fragrance: “Jeux de Peau is a gourmand scent in the very best sense of the genre. This is no bakery to me, this is the idea of a bakery, filtered and refined, rendered abstract, removed from reality, seen through the eyes of an artist and thus becoming something else, something higher – art.”

Join the Dots with Clarins 3-Dot Liner at Makeup Monster
It’s a great idea – if you struggle with your eyeliner lines and flicks, then the Clarins 3-dot Liner provides the ideal middle ground. Take a look at this review over at Makeup Monster, complete with swatches and get the look pictures.

I'm a small fan of Serge Luten's fragrances, I've got those I love (Ambre Sultan), those I like but can't wear (Clair de Musc) and those I'm not afraid to wear as a weapon (Muscs Koublai Kahn - MKK) so I was eager to wrap myself in his latest fragrance, Jeux de Peau. Allegedly, Jeux de Peau is meant to remind the wearer of warm buttered toast, I'm not sure if I get that, but I definitely get something... Straight of the bat, at first sniff there is something odd. There is a sort of, basically, uriney note. It's very brief so don't panic, and I think it actually works to hold everything together. Lutens clearly isn't scared of inappropriate animalics. If you've ever smelt MKK with its legendary opening "fecal" note then you'll know what I mean. It feels wrong at first, but then it starts to work. But after that, WOW, what I get after that isn't toast, but pistachio. Specifically, salty crushed pistachios, maybe mixed in with buttery toffee. There's a burnt sugar note in there too, when you notice the Immortelle, in it's Maple form rather than Aniseed or Liquorice. A real spicy sweetness that absolutely works. As it dries down, it still manages to hold everything together amazingly well, the pistachio is still there, the maple, and something slightly fruity, like caramelised figs. Overall, there's an oddness to the fragrance which means it won't be a crowd pleaser, not everyone will love this. It sort of feels like it's not a Real Life scent, but something you'll wear walking through a frostbitten forest. I think it's brilliant, give it a go.

This entry was posted on Friday, August 10th, 2012 at 8:00 am and is filed under Blog Posts of the Week, Fragrance, Make-up. You can follow any responses to this entry through the RSS 2.0 feed. You can skip to the end and leave a response. Pinging is currently not allowed.