How Much Is Your Make-Up Bag Worth – The Results 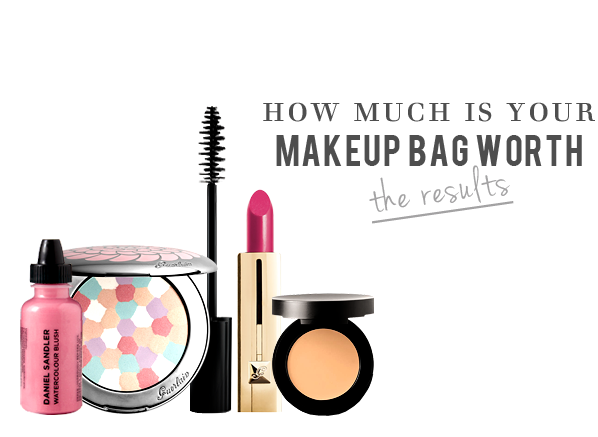 A little while ago we asked you to fill out a survey all about the contents of your make-up bag, and you most certainly delivered! Around 2000 of you divulged the ins and outs of your collection in our ‘How Much Is Your Make-up Bag Worth’ survey, from how much you spend on your make-up purchases every month to how highly you rank those purchases amongst your other outgoings.

The results are pretty fascinating – here are a few highlights…

Over one third of all respondents have spent upwards of £15 on a lipstick – around one in 5 of whom have spent more than £25!

Eyeliner is an area where we don’t spend too much, though we’re not willing to scrimp either. 38% of all respondents spend anywhere from £6 to £11, saving the bulk of their eye budget for a great mascara.

Almost a third of the respondents stated that they have spent £18 to £23 on mascara in the past, with 45% of overall respondents spending from £18 to £30+

Our foundation is one of the most important commodities in our make-up arsenal. The majority of respondents, 31%, have a foundation worth £17 – £27, although 2% of respondents have spent £56 or more!

We’re more willing to scale back on the price of our concealer than our foundation, with the majority of respondents stating that they spend £6 – 11.

The amount we spend on our eyeshadow (including palettes) is pretty manageable, with 40% of all respondents spending less than £16.

We’re more willing to splash on bronzer than we are on an expensive blusher, probably because there are so many shades! The survey showed that our average spend on blusher is around £17, while for bronzer it is £20.50.

We also offered a £20 voucher for one lucky entrant, and the winner of the prize draw was C Westbury!

This entry was posted on Monday, January 21st, 2013 at 5:41 pm and is filed under Make-up, Special Post, Survey. You can follow any responses to this entry through the RSS 2.0 feed. You can skip to the end and leave a response. Pinging is currently not allowed.

@escentual Try the E-S-C-E-N-T-U-A-L SPF application method so you're always safe in the sun. Here are our #SunPoverty ambassa… https://t.co/lx3zk5o6Ym
6 hours, 59 minutes ago • reply • retweet • favourite

@escentual News just in! There's still time to enter our Instagram competition to be in with a chance of winning the Initio He… https://t.co/nbuTzL5pH0
1 day, 7 hours ago • reply • retweet • favourite

@escentual Thank you, Issey Miyake, for making the fragrance and fashion world a more beautiful place❤️ Your legacy will live on forever #isseymiyake
2 days, 9 hours ago • reply • retweet • favourite

@escentual We're prepared for a week of sunshine here at Escentual with our #summer makeup bags ready to go! ☀️ Head over to… https://t.co/7mvMCFbQRT
3 days, 2 hours ago • reply • retweet • favourite