Scent Memories of my Father 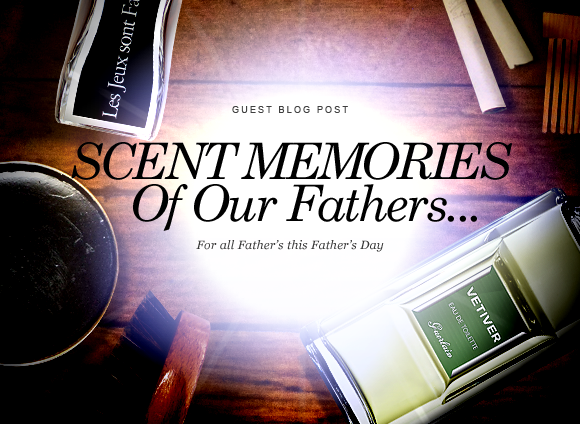 What was your gateway into the world of fragrance? Chances are, you were guided through it by your parents. The delicate wisps of Chanel Allure on a scarf and the deep woody aroma of shaving cream mixed with an anonymous, mass market cologne were mine. Though I would not otherwise pick them out of a line-up for their remarkableness, I love those mnemonic scents more than any I could hope to choose for myself.

In honour of Father’s Day, we’ve asked some noted perfumers and fragrance lovers for their most beloved scent memories from their fathers. Here’s what they had to say…

“To be quite honest my father didn’t wear scent but he wore brilliantine. The principal olfactory memory I have of him is a wonderful lavender note which was contained in a very old Italian brand called “brillantina Linetti”.  He used it all the time and since he spent most of his time in Positano, this lavender/brilliantine scent got mixed up with the scent of summer in Positano.  I was never conscious of using this scent-memory when we created our signature fragrance, Eau d’Italie, but I think that deep down in my subconscious it was one of the starting points when we began work on Eau d’Italie.”

“The smells that I associate with my father are those that I’ve come to associate with the old fashioned idea of manliness: shaving soap, cigarettes, the leather upholstery in his car. These are smells that not only make me think of my father – they also bring to mind my boyhood and my initiation into the rites of manhood.”

“The scents I associate with my father are ones that remain as strong today as when I first recall them as a small child. The most poignant is the memory of autumn walks in the countryside. The scent of woods , earth, leaves, of the forest floor, combined with traces of tobacco;  scents that transport me to a feeling of comfort and being carefree even today.  As children we were always encouraged to be outdoors, and scents of England in Fall remain an immediate feelgood injection; these scents are why Vetiver by Guerlain is a firm favourite , and weekend scent of choice – the outdoors , rich with green notes , sunshine and hay scents. Heavenly.”

“The fragrance #104 Greenbriar 1968 is a memory of my Grandfather, the sawmill that he owned and the stone house where he lived. It is blended with Sawdust, Fresh Cut Hay, Worn Leather Work Gloves, Pipe Tobacco and a healthy amount of Dirt.  There is also a faint whiff of cotton overalls covered in Axel Grease.”

“I’m an Army Brat, my Father was in the (now disbanded) Staffordshire regiment. We moved around a lot, pretty much a new country every few years, with an extended stay in Alberta, Canada. So my formative years were a mixture of different aromas; the broken terracotta of Gibraltar, the stale bricks of the tower blocks in Hannover, the clean & crisp snow of Alberta in the Winter, with carrots for Elk and Deer, and the blazing prairie in the Summer. However, my Dad always had a distinct smell, and that is of boot polish. He would obsessively polish his army boots every night. A small pot of polish, two brushes and a chamois leather. He would get the movement perfect and fluid, brush on, brush off – Mr Miagi has things to learn from my dad!

My father didn’t wear a “cologne” regularly, there was a single bottle of Brut in Bathroom cabinet. Remembering it now, it was practically pure alcohol – but that warm, marine smell still influences me today – I love a good Vetiver, Guerlain’s being of course, the classic.

When I got older, I’d occasionally meet my dad on the base at where ever we were posted at the time. Normally the Living quarters and the infantry base are close together, so I’d walk up after school to visit the barbers (there was only 2 haircut styles available, and both were short back & sides). There’s a very distinct aroma you get in Army Buildings, old leather, more boot polish, old paper, maps and forms, mud & hay, wet concrete, guns and ammunition. I’ve never smelt it away from an Army installation – it’s really affected my favourite fragrances today – big musky, mossy things. Caron’s Yattagan, Serge Lutens Chergui, CB I Hate Perfume’s Wild Hunt, it’s all intoxicating.

My Father’s in his 60s now, and he still doesn’t wear a lot of fragrance, until recently. My mother passed away several years ago, and he had a fancy do to go to with my Mother’s family. We went perfume shopping (or, as he insists “cologne”, still – we must have tried every fragrance in the shop! Eventually we settled on Dior Homme – which I realised was essentially a lavender-on-vetiver fragrance, not far away from Brut, but much more classy, just like my Dad.”

“When I was a young boy, I spent all my summer holidays in the family fiefdom in Bourgogne, the place where my father was born.
Every morning I went, armed with a rustic fishing rod, my bait, a very heavy seal in this time, to fish all day in my little paradise that seemed immense to my children’s eyes, after all barely larger than a duck pond…
Lost in the reeds, crushing aromatic herbs and other wild mint, I reigned alone on my little kingdom disrupted by regular caw frogs.

My father came pick me up at nightfall, a cigar announced his coming as clearly as the sound of the old car with its threadbare leather seats that amazed that my children’s eyes.

We spent there, alone, in silence, a time for us, those we never forget.
At the time when my children are growing up I remember that, it’s me that never knew smoking a good cigar, that smells that take roots in our memory as indelible memories.
My latest fragrance is a tribute to my father, “Les Jeux Sont Faits,” recounts for the most part this memory.”

“My father has always been a man fully engaged in the spirit of scent audacity addicted only to Jicky and Mitsouko. Being outrageous and original with his scents was part of his fantasy and authenticity. Against all odds he gave me Givenchy Gentleman when I was 12 as a passport to the art of seduction. I love his permanent contradiction being at the same time beautifully sophisticated with his scent but approaching life like an authentic free state farm boy from South Africa. He wears scent with the desire to be amazing.

This entry was posted on Friday, June 14th, 2013 at 1:30 pm and is filed under Fragrance, Special Post, Spotlight On. You can follow any responses to this entry through the RSS 2.0 feed. You can skip to the end and leave a response. Pinging is currently not allowed.

@escentual Try the E-S-C-E-N-T-U-A-L SPF application method so you're always safe in the sun. Here are our #SunPoverty ambassa… https://t.co/lx3zk5o6Ym
8 hours, 25 minutes ago • reply • retweet • favourite

@escentual News just in! There's still time to enter our Instagram competition to be in with a chance of winning the Initio He… https://t.co/nbuTzL5pH0
1 day, 8 hours ago • reply • retweet • favourite

@escentual Thank you, Issey Miyake, for making the fragrance and fashion world a more beautiful place❤️ Your legacy will live on forever #isseymiyake
2 days, 11 hours ago • reply • retweet • favourite

@escentual We're prepared for a week of sunshine here at Escentual with our #summer makeup bags ready to go! ☀️ Head over to… https://t.co/7mvMCFbQRT
3 days, 3 hours ago • reply • retweet • favourite