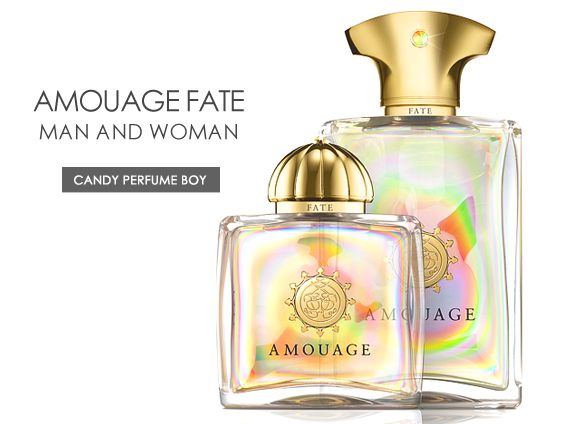 If I had to pick one word to describe Amouage I would choose ‘grand’, but one word would simply not be enough to aptly capture the wonder of such a pivotal brand.

The best way to describe Amouage is as a perfume house for those who revel in the excesses in life and their perfumes are certainly not for the faint-hearted or those that are afraid to make a bold statement with their scent.

Once a year Amouage releases a masculine and feminine pair of perfumes based on a singular theme. Over the years Creative Director Christopher Chong has pulled inspiration from music, opera, ballet and chaos (to name a few) to create unique, challenging and beautiful perfumes.

This year, to end the first cycle in the Amouage narrative, Chong has presented the idea of Fate in two perfumes (one masculine, one feminine) that are as decisive as the brand they represent and ask the wearer to consider the question – do you believe in Fate?

Many of Amouage’s perfumes can be classified as ‘oriental’ meaning that they showcase warm, spicy notes evocative of the orient. Fate Woman is no exception but it’ an Amouage Oriental with a twist – a gourmand twist.

In the base Fate Woman becomes richer and deeper with leather, incense and patchouli facets. At this point the big cloud of sweetness swirls high above the warmer, more resinous notes creating a sense of two polar opposites floating together in harmony.

It would be fair to say that Fate Woman is one of the more unusual Amouage offerings (with Interlude Woman being the craziest) with the most joyous disposition we have seen from the brand yet. Despite the fact that Fate Woman is more exuberant than other Amouage fragrances it still comes across as beautifully baroque in the true Amouage style.

Fate Man is an entirely different beast in comparison to its female counterpart. Where the feminine seems vivacious (and grandly beautiful) Fate Man seems harsher, as if he is the cruel master of kismet, laughing wickedly as he controls the future.

The opening accord of Fate Man is striking – a confronting blend of chewy fruit, cold herbs and bitter green absinthe that elicits strong feelings of wonder, fear and confusion. With time, plumes of verdant smoke rise up from the absinthe adding a welcome layer of depth to the lighter, more translucent notes.

Fate Man is a perfume that I don’t feel that I have fully fathomed out, even after numerous wearings. It develops immensely on the skin and whilst it may start out as a mean-spirited absinth drinker it definitely doesn’t stay that way and as it dries down the complex note of immortelle, with its maple syrup and curried nuances, links the spiky opening with a base of plush woods and tonka bean.

Complicated characters are often the most interesting and Fate Man certainly doesn’t fail in this respect, in fact I defy anyone to approach it with any form of indifference. I imagine the type of man to wear Fate Man to be a brooding artist, one who seeks solace in all that is dark, dangerous and unpredictable – a modern wizard with a fear for the unknown.

This entry was posted on Wednesday, August 14th, 2013 at 9:21 am and is filed under Candy Perfume Boy, Fragrance, Men, Special Post, Tried & Tested. You can follow any responses to this entry through the RSS 2.0 feed. You can skip to the end and leave a response. Pinging is currently not allowed.

@escentual If you’ve heard about @clarinsuk’s Treatment Essences but you’re not sure which one's for you, you’re in luck. Our… https://t.co/xY7NH2Wj63
2 days, 4 hours ago • reply • retweet • favourite

@escentual Looking to upgrade your skincare routine? If so, you might just want to try your luck with our @clarins_uk Super Re… https://t.co/8k5DDp4orI
2 days, 23 hours ago • reply • retweet • favourite

@escentual Wondering which fragrances made it into June's #EscentualScent Perfume Trial? Or keen to learn even more about the… https://t.co/s4aO21XNRf
3 days, 6 hours ago • reply • retweet • favourite