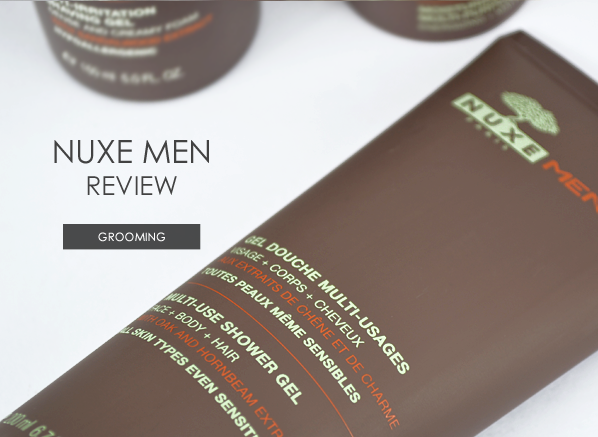 Nuxe Men – A range that helps me feel a little bit better about my environmental impact. The range of products makes excellent use of Nuxe’s extensive knowledge and experience in organic products. Unique plant-based ingredients make up 79% of the composition and no parabens here either. Along with botanical active ingredients are six different types of tree extracts with names just too long to spell.

Creams and gels are slightly different from the female led Nuxe products, being adapted so the texture is more suited to men’s skin. Massive bonus that the products are fragranced with a spiced woody conjunction of Cedar, Bergamot and Patchouli, which not only smells musky, earthy and of man but acts as a great base for aftershave. 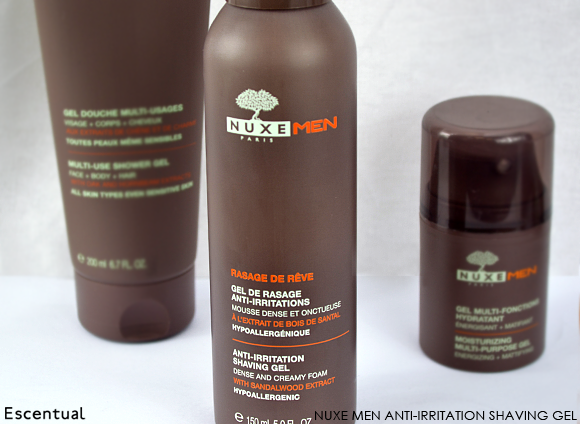 So, for the last 6 months I’ve been messing about trying to grow a beard. As a result apart from my neck I haven’t shaved properly since May, although I’ve used a beard trimmer on occasion! I was then apprehensive not only to use a shaving gel but for putting a blade to my face for the first time in awhile.

I needn’t have worried. Previously my shaving routine would consist of using a pre-shave oil, then shaving cream. To really test the Nuxe Men Anti-Irritation Shaving Gel I dropped the pre-shave oil and went all out with the gel only. 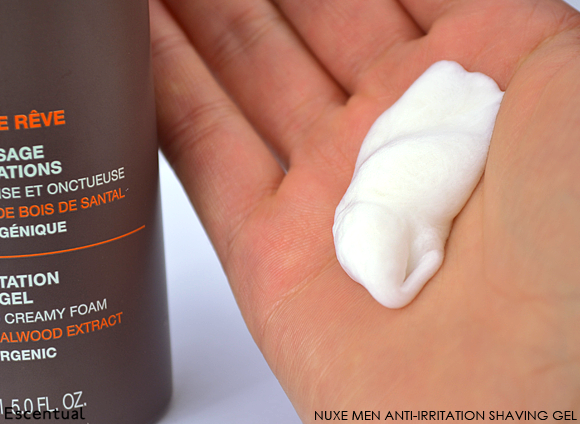 This spans the gel/cream divide and brings the easy glide attributes of a gel along with moisturising effect of a cream. Similar to the moisturising gel I started off with far too much product, and could of had four shaves. The gel really lathers up well and a walnut size amount is more than plenty.

I didn’t get any irritation or razor burns and as yet no ingrown hairs which had been an issue for myself in my pre-beard days.

I loved the Nuxe Moisturising Multi-Purpose Gel and the only issue I had was pressing down too much and getting too much product on my hands/face! It really does hydrate and moisturise well and was absorbed quickly. No glossy, shiny or oily looking skin either, which can be an issue with other moisturisers. 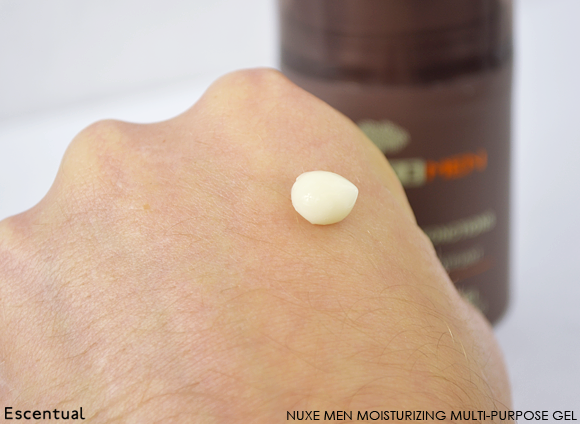 It suggests day and night usage however for the period of the trial I was using the aftershave balm in the morning and then the gel in evening. I didn’t feel the need and the gel was effective enough for this to work out well.

At the end of the day I’ve definitely seen a marked improvement in my skin. It’s been starting to dry out especially as the colder weather is creeping in and the air con is wafting more hot air over me! 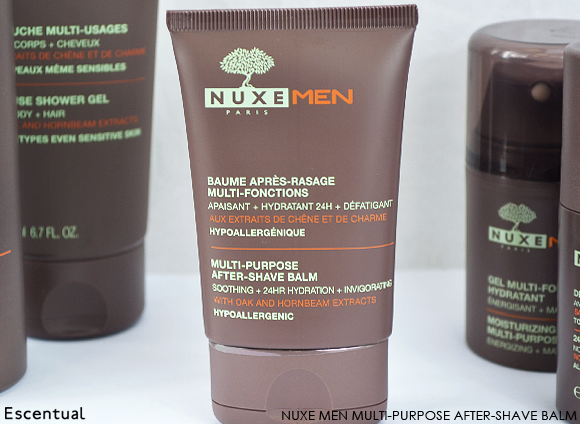 Out of the products, the Nuxe Men Multi-Purpose After Shave Balm was the least fragrant. I imagine it’s because it’s focusing on the primary job of soothing, hydrating after a shave, which it does very well. 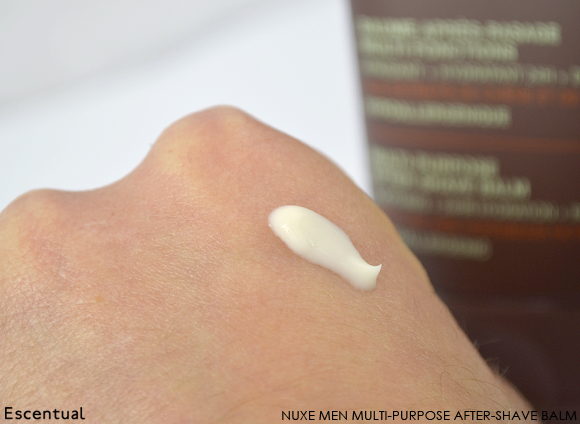 I felt that this balm really did sooth my skin and like the moisture gel didn’t leave my skin looking oily at all. It was absorbed very well and after two weeks I’ve not had any issues of redness or soreness.

The balm is formulated with oak and hornbeam extracts which along with soothing the skin help reduce any signs of stress and fatigue in the skin after shaving. 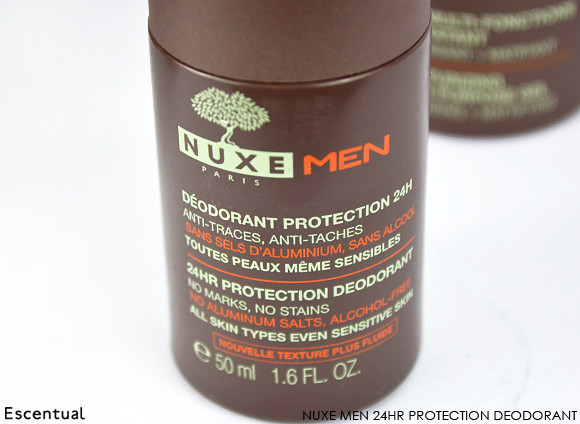 If I was slightly apprehensive about the shaving gel I was uber concerned with a switch from my usual deodorant spray to the 24HR Protection Deodorant roll on. I cannot remember the last time I used a roll on and this was obvious when I didn’t realise that you need to give it a good old shake before first use. 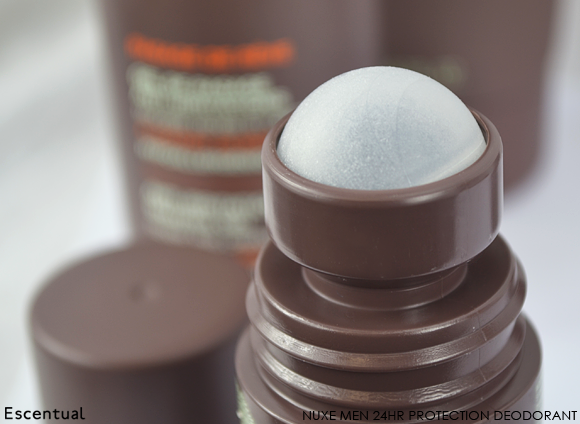 It’s a strong statement to guarantee 24hr protection and no stain marks, however I can confirm that the deodorant meets both. There are no aluminium salts or alcohol and the corn powder base is the trick to no stains or marks. The deodorant was pleasant to use with a light scent of sage and sandalwood. I haven’t had any irritation and the whole experience might lead me to stick with a roll on deodorant for the foreseeable future. 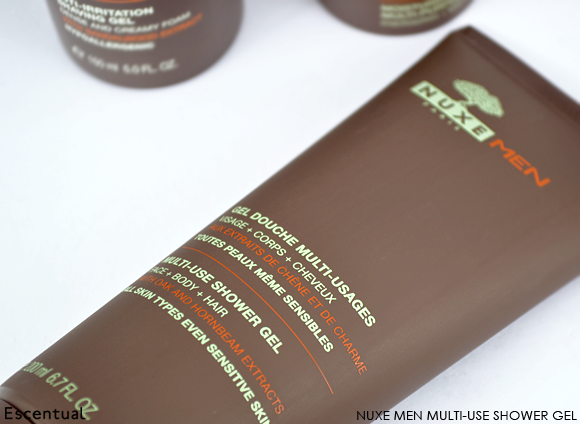 I’ve never really used a skincare shower gel before. Usually I’m a “buy whichever is on offer at the supermarket” type of guy. The only exception has been fragrance brand shower gels which I’ve used primarily as setting a base for the fragrance on special events/nights out.

I’ve benched my typical shower gel and generic shampoo routine and it’s been two weeks of using the Multi-Use Shower Gel. I confirm that I’m still clean and didn’t have to use exuberant amounts of shower gel either. Like most shower gels it didn’t lather up massively on the body however lathered up quickly into a thick foam when used on my hair.

Along with the multi-purpose gel this was the most fragrant product out of the range, which helped to give a little energy boost in the morning! 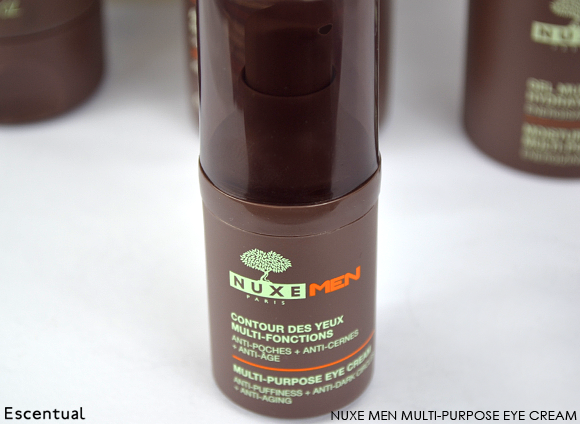 Historically I’ve overlooked eye care and I’ve never really got it into my morning routine, apart from grabbing an eye revive after a late/long night. During the trial of the Multi-Purpose Eye Cream though I made a check-list of what to do and when, and (apart from the first week, which was sporadic) I stuck to it.

After using the cream, my eyes haven’t been feeling tight or dry by mid afternoon, even though I’ve thrown in some late night drinking sessions to really test the cream out. Dark circles are nowhere near as large or noticeable as they once were, although I probably won’t start drinking on school nights to push that! 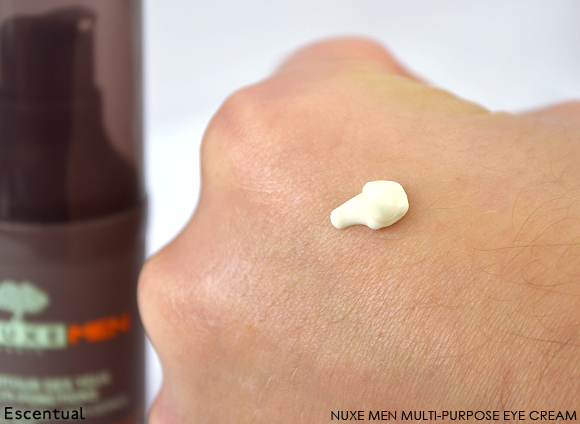 I used the cream in the morning mostly, and the only time I used it in the evening/early morning was after a late night. Like the gel I had some teething issues getting used to the right amount and application method. I found that using an amount the size of a peppercorn worked well. I would dap the cream around the eyes and then gently rub it in. It wasn’t absorbed as fast as the gel but within minutes there was no evidence of shiny skin.

This competition is now closed! Congratulations to Joel who wins the set of Nuxe Men skincare.

This entry was posted on Tuesday, November 5th, 2013 at 1:51 pm and is filed under Competitions, Men, New products, Skincare, Swatches, Tried & Tested. You can follow any responses to this entry through the RSS 2.0 feed. You can skip to the end and leave a response. Pinging is currently not allowed.

@escentual Trying to make it to January payday... #Valentino We have so much love for Kristen McMenamy and @MaisonValentino… https://t.co/Lr664ECUEn
1 day, 23 hours ago • reply • retweet • favourite